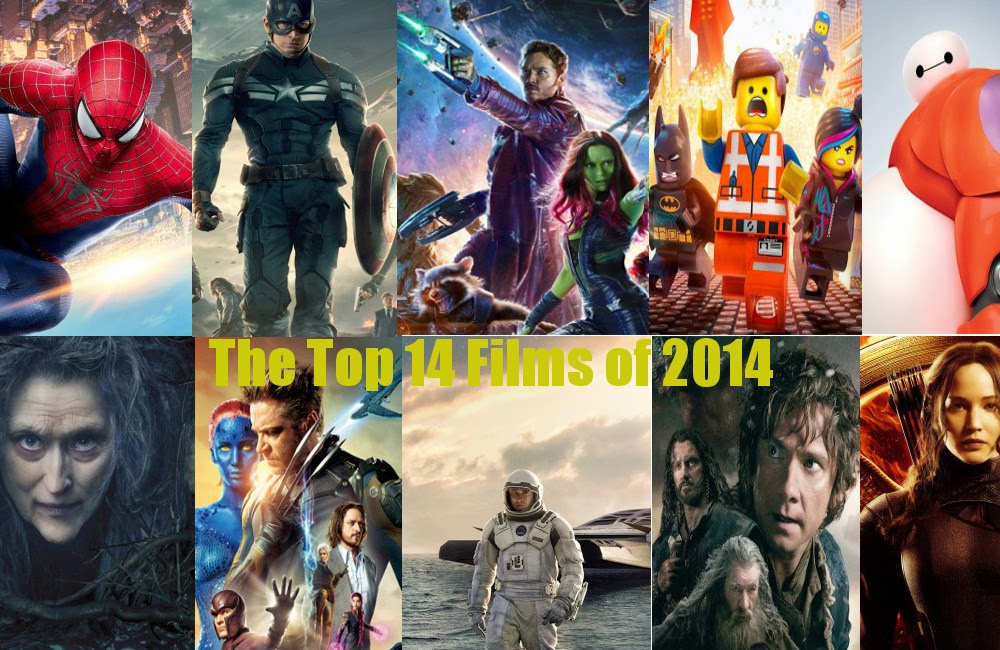 Another year has passed us by, and with it another lineup of films. With the new year just beginning, it is time to take part in that tradition of listing my favorite films of the year 2014. This list was not an easy to put together as 12 films had top notched scores. However, after a few revisions, I have managed to put together a list that I can get behind. Some movies on this list you may agree with; while others will likely question taste in film (in fact I am counting on that). Yet whether you agree with it or not, these were the 14 films that I found to be the best movies of 2014.

14. Godzilla
When I was growing up, Godzilla was one of my favorite things to watch. Sure the series could be silly and strange, but there was always a sense of entertainment for me (mostly from the kaiju fights). So you can imagine my anticipation for the King of Monsters' return to the silver screen. The blockbuster from Gareth Edwards was a tad underwhelming for my taste. I suppose I was expecting something bigger. However what I saw was by no means a bad film. This rendition of Godzilla paid tribute to the franchise with its story structure and atmosphere. It may not have had the most impact, but Godzilla was an entertaining blockbuster for 2014.

10. Into the Woods
You can never go wrong with a musical. This holiday season, moviegoers went Into the Woods as Stephen Sondheim's hit musical made the transition to the silver screen; and what a wonderful transition it was. Into The Woods delights with its all star cast and its wonderful music. While there were many changes from the original Broadway show, Into The Woods not only captured the essence of the play but the very idea of what makes musicals great.

9. The Amazing Spider-Man 2
By no means is this choice a popular one. Granted I have never been known to side with the majority (unless we just so happen to come to a mutual understanding). With that said, I came out of The Amazing Spider-Man 2 very pleased. Where many saw this sequel to be crowded, incoherent and a blasphemy on the superhero genre, I saw something else. I saw Spider-Man in a bigger film that had a story I could follow, solid performances, exciting action and a tone fitting for the Wall Crawler. Maybe that is not enough for some moviegoers out there (and its alright if that is true), but for me these factors made for a movie experience that I felt did justice to a character that I have loved for many years.

7. Interstellar
It is difficult for me to pass up a film from Christopher Nolan. When content for Interstellar began to hit the web, I knew it was going to be a film that I would love to see. This sci-fi film might have been a little too ambitious for its own good, but that is not to say Christopher Nolan's new movie did not have its moments. If anything, Interstellar was the best made film of the year. When I say this I mean that this movie had the best technical factors of any film in 2014. Interstellar's effects were out of this world (no pun intended) as they created beautiful shots of space and formed a sequence that can only be experience through watching the movie. Add this factor with an intriguing story, as well as great performances from the likes of Matthew McConaughey, and you have a space odyssey worthy of the sci-fi genre.

6. The Lego Movie
If there was any movie that defined the word surprise in 2014, it was The Lego Movie. I was hoping this animated flick would be good, but I did not imagine this film would be as good as it was. The Lego Movie did feature elements seen in films like it; such as the character of Emmett and how he is the chosen one. However The Lego Movie used these elements to the best of its ability and it featured some surprises as well. The film's strength come from its sense of humor and its animation. The movie's humor was witty and features one liners that were actually amusing. The animation was outstanding as it blended 3D with stop motion. I could on and on about The Lego Movie, but I think the best way to some it up is this: Everything Is Awesome!

5. X-Men: Days of Future Past
The X-Men had a lot to prove this year. The superhero series has had a rocky few years trying to get back up the mountain of success. Fortunately, X-Men more then delivered with Days of Future Past. Days of Future Past not only continued the story of X-Men: First Class, but it also bridged the new films with the previous X-Men Trilogy. Blending two parts of franchise that seem so different is not an easy thing to do; however Days of Future Past found a way to succeed. While the of the was a bit slow, things got more tense as the movie progressed. The end result was a superhero film with an engaging conflict, a strong ensemble and super powered action. Days of Future Past was a turning point in this franchise; and the film,in my opinion, is the best X-Men film to date.

4. Gone Girl
When a David Fincher film hits theaters, it certainlys get the attention of moviegoers everywhere. In 2014, Fincher brought Gillian Flynn's novel, Gone Girl, to the silver screen. For months, this thriller was surrounded in mystery as well as anticipation. Upon seeing the film in October, I found myself impressed with Gone Girl's presentation. While the story was hard to get into during the first act, the plot really gets interesting after the first hour. Along with its theme of a media circus, the plot is thrilling to say the least with the story's crime. The film also had terrific performances from Ben Affleck and Rosamund Pike; especially Pike as the role of Amy Dunne. It was hard to say where Gone Girl ranks with Fincher's previous films, but I feel this thriller is among the director's better movie in recent memory. If anything, this crime thriller was good enough to make this list.

2. Guardians of the Galaxy
Out of all Marvel's films, Guardians of the Galaxy was indeed the studio's wild card. Not only would this movie take the Marvel Cinematic Universe to the far reaches of space, but the studio would be bringing a property all but unknown to the general public. The result was a film worthy to be apart of the MCU. Guardians' greatest strength was its sense of adventure. While it did not have the most complex of stories, the plot managed l worked by being fast paced and feeling like a space adventure. The Guardians themselves were a colorful cast and each of them were easy to get behind and enjoy. Along with the enjoyable cast was action worthy of any sci-fi blockbuster. I could on and on about this film, but there is a chance you already most of the details. To put it simply, Guardians of the Galaxy was a one of a kind film as it brought a new adventure to the world of Marvel. Perhaps a better way to put is this: I Am Groot!

1. Chef
Of all the films to hit 2014, this independent film from Jon Favreau takes the number one spot. I missed this film when it hit theaters during the summer, but I was able to watch Chef right as 2014 came to an end; and I am so lucky that I did watch this movie. It may not look like it, but Chef featured themes that certainly got my attention. The movie expressed the idea of being a creator and the conflict that an artist, or in this case chef, wrestles with making something out of love or creating things out of necessity. The story to the film was straightforward and provided plenty of moments; some funny while others were touching. The cast, for the most part, is solid with Jon Favreau delivering his best performance to date. There was an interesting style behind the film as the cinematography expressed the social media aspect to the film as well as captured the details in cooking a great meal. However of all the things that stood out about Chef, it was the film's simplicity that shined through. When it came right down to it, Chef felt like a film that was created by a group of friends who simply wanted to make a good movie. This film showed that sometimes you do not need to be the most complex or artistic movie around. Like the concept behind Chef, all it really takes to make a great film is the passion of doing something you love. Also, this is a must see for any food lovers out there.

So there you have it: those were my Top 14 films of 2014. There are many films that I did not get to see this past year; so in case you are wondering why some acclaimed movies did not make this list, that is likely the reason. Then again, those films had as much of a chance to be ranked as the movies that were listed. Also, I expect that many of you do not share my feelings about the best movies of 2014, and that is alright. If you have a list of your own, feel free to share it below. That being said, this concludes my work for the year of 2014. Now it is time to move onward to the year of 2015.

And Now For The Honorable Mentions:

Posted by Something Cinematic at 4:03 PM