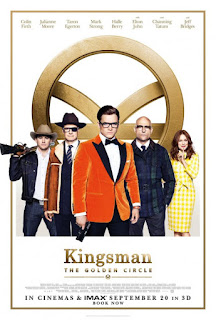 Manners maketh man. Do you know what that means? That is one statement that has defined the spy action blockbuster Kingsman: The Secret Service. The film based on the comic by Mark Millar was released in 2015 and with its sense of style became an instant classic. With the Secret Service being a success it was no surprise that Kingsman would continue its cinematic career and sure enough a sequel has made its way to theaters in the form of Kingsman: The Golden Circle. Once again directed by Matthew Vaughn The Golden Circle looked too follow the standard sequel blueprint by expanding on foundation of the first film. Although my expectations were fairly moderate I was eager to see how this sequel would play out,and I can safely say that The Golden Circle did not disappoint.

The movie continues the story of Eggsy (Taron Egerton) who,along with Merlin (Mark Strong) and the resurrected Harry (Colin Firth) join forces with the Statesmen after Kingsman is destroyed by an organization known as the Golden Circle. The plot to The Golden Circle accomplishes two things: being simplistic and expanding the continuity. The adventure aspect did its job by being exciting while new elements such as the Statesman made the overall plot all the more investing. However there were some issues with the story’s execution. While having common tropes was expected and was a minor issue, what did hold this story back was ineffective plot points. The theme about drugs was interesting but it had a little to no effect on the overall story; while the US president subplot was (although harmless) pointless and would have been better off as a one shot scene. Thankfully other story elements pulled the movie’s weight and made this spy story a fitting adventure as well as a enjoyable experience. 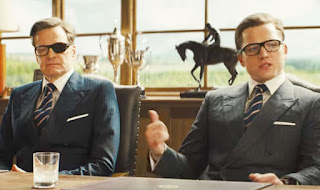 Like the first film this movie's cast was rich with personality. Taron Egerton provided a solid performance as Eggsy as the young spy’s direction brought new elements to his progression but kept true to the character himself. Colin Firth,on the other hand, had a unique performance as Harry as his direction was different for both the character as well the actor. Together Firth and Egerton were able to revitalize their chemistry which was just as beneficial as it was one in the first film. Along with these two leads was a supporting cast with plenty of character. The likes of Mark Strong,Halle Berry, Pedro Pascal,Channing Tatum and Jeff Bridges did their jobs well by being characters who were supportive but could stand out when need be. Then there was Julianne Moore who seemed to be having a blast playing the villainous Poppy. Poppy's happy-go-lucky demeanor was only complemented by her sadistic nature which made her an antagonist who felt right at home in this film series. Topping things off was the appearance by Elton John who, while excessive, brought an entertaining factor to this colorful cast.

Adding to the movies over the top nature was none other than the action. Much like the first film, the action to The Golden Circle was stylish as each sequence was masterfully executed. Complementing the action was the cinematography and effects which provided the right ingenuity to the filmmaking-although the effects could have been cleaner in some areas. The movie’s comedy was effective by having humorous moments that were not too distracting and worked to the movie's atmosphere. In the matter of music, Henry Jackman returned to compose The Golden Circle's soundtrack. Although the score was not as memorable as its predecessor  it still worked by having compositions that were thrilling, energetic and worthy of any spy film. 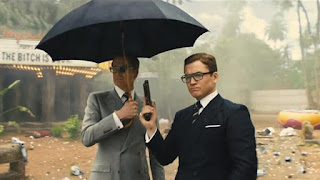 To say nothing else Kingsman: The Golden Circle went as expected which worked for and against the movie. When it came down to it there was not much to the movie as the likes of storytelling and presentation had a broad impact. However the movie lives by an old and classy saying: "if it ain't broke don't fix it". The merits that made the first film so enjoyable were present in this one and were even expanded upon in some areas. It is in this Film Adventurer's opinion that The Golden Circle is the kind of sequel that, although it may not outshine its predecessor ,manages to fit just nicely into the concepts behind Kingsman.

Posted by Something Cinematic at 1:59 PM