It Review: A Haunting And Captivating Adaptation! 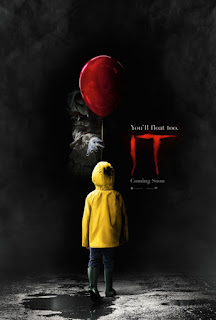 The fall season is underway, and things seem to be off to a frightening start. Now playing in theaters is none other than It:the horror film based on the 1986 novel by Stephen King. Since the novel’s release It has become a pop culture sensation as the story was made all the more famous thanks to the 1990 television miniseries. Now this haunting tale finds itself on the silver screen with Andy Muschiette, the director of Mama, helming the new adaptation. So far It has been well-received with some going as far as calling the movie the best adaptation to King’s work; but as for this Film Adventurer's opinion I must say that I...full heartedly agree.

The story of It centers on a group of kids who are haunted by the demonic creature known as Pennywise the Dancing Clown (Bill Skarsgard). If you are familiar with the novel then you will likely not be surprised with the movie's plot or its outcome, but that did not prevent the film's tale from being any less impressive. The movie took its time to tell the story which allowed elements like the kids bonding (as well as their individual stories) to feel just as important as the conflict with Pennywise. The plot's thematic narrative and sense of pacing made this terrifying adventure feel refreshing and showed the horror film such as It was more than a nonstop thrill ride.

A cast such as this one is no easy thing to pull off seeing that the movie's main focus is a group of newcomers, but this ensemble rose to the occasion. From the progression of Bill (Jaeden Lieberher) and Beverly(Sophia Lillis) to the characteristics of Ben, Stan, Eddie, Mike and Richie's(Jermey Ray Taylor, Wyatt Oleff,Jack Dylan Grazer,Chosen Jacobs and Finn Wolfhard), there was much to the Losers Club that made them more than just one note characters; and the performances from these young actors was impressive to say the least. When it came to the townsfolk these characters were effective. While they could be outlandish this supporting cast made sense given the concept and direction behind the story; though there were a few surprises in this group-particularly with the likes of Nicholas Hamilton as the bully Henry Bowers. Last and certainly not least was Bill Skarsgard as Pennywise. Pennywise was as charismatic as he was menacing and Skarsgard's performance made the evil clown feel real with his quirky but suspicious mannerisms. It was for these reasons Pennywise was not only terrifying but ended up being one of the best villain performances that I have seen all year.

As expected It had plenty of scary moments but I never imagined the movie’s sense of horror would be as good as it was. While some scenes could be excessive in their execution (particularly when Pennywise would jump at the camera) the film's horror was still effective as it used a variety of scare tactics. I was particularly impressed with Pennywise's hauntings of each Losers Club member. These scenes gushed with creativity as their twisted sense of imagination could make even the likes of A Nightmare on Elm Street feel jealous. Among the standout aspects was the tone which seemed fitting for the film's direction, but this could also be an off-putting factor for the movie as well. The atmosphere was interchangeable as the tone could go from dark to light in a heartbeat. Although this direction was unique and made sense given the film’s childish themes, it did however take away from the scarier aspects to the movie. This contrast of light and dark was also seen in the score by Benjamin Wallfisch as it featured themes that were both heartwarming as well as terrifying.

Despite its zealous presentation, It turned out to be a dynamic adaptation. The film's sense of storytelling and characters was captivating and was complimented by its unique tone and stylish horror. For these reasons, and a few more, It was not just a frightening time at the movies but an engaging experience that made for a fitting tribute to Stephen King's novel.

Posted by Something Cinematic at 1:02 PM