Michael Keaton rumored for Villain Role in Spider-Man: Homecoming. Who Should He Play? 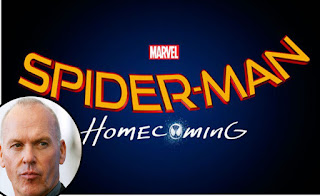 With Captain America: Civil War just week's away, it is no surprise that we hearing more and more about the debut of Spider-Man. The friendly neighborhood hero will be making his first appearance in the MCU in the upcoming summer blockbuster, but it will not be long for Spider-Man to make his return to the silver screen. Next summer the wall crawler will be getting his own solo adventure in the newly christened Spider-Man: Homecoming. While I do find the film's title questionable, it does not sway my excitement for the film. It is more than likely that more news on Spider-Man: Homecoming will be revealed this summer, but that is not to say that reports for the movie are not hitting the web already. The film's cast continues to revealed as along with Tom Holland and Marisa Tomei, the upcoming movie has added singer/actress Zendaya as well as Grand Budapest Hotel star: Tony Revolori, have been added to the ever growing ensemble. However the news that caught my attention was last week's rumor that stated that a famous superhero actor might be taking up the role of film's villain.

While nothing has been confirmed, rumors suggest that Michael Keaton could be taking up the role as the antagonist to this new Spider-Man film. Several reports suggest that film's villain could be Adrian Toomes, aka the Vulture, which would suggest that Keaton is up for that particular role; but again nothing has been confirmed. Before going any further let us get the elephant in the room. As many moviegoers know, Michael Keaton is famous for his role as the Dark Knight in 1989's Batman. So seeing this former cape crusader in another famous superhero property could come off as a little strange. Yet other actors like Chris Evans, and Spider-Man's own JK Simmons, are known for staring in other superhero movies and that has not stop them from working on other blockbusters in this genre. So if Michael Keaton is confirmed for the villain role in Spider-Man: Homecoming then the casting will only help to establish the film's cast. However if this casting is true, then who should Keaton play?

Read the full article now on Moviepilot.
Posted by Something Cinematic at 2:05 PM