The Jungle Book Review: Adventurous Adaption to the Disney Classic 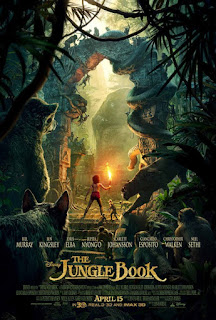 Disney's trend of bringing animated films to life continues. In recent years the studio have taken their cherished classic and given them a live action interpretation. The latest film to fall under this concept takes moviegoers into the wild as the Disney brings The Jungle Book back to the silver screen. Based on the 1967 film this new interpretation of the 1894 novel is directed by none other than Jon Favreau; the man behind movies such as Elf and Iron Man. While the concepts behind this film was nothing new, this adaption looked like a blockbuster worth seeing on the silver screen as the movie's trailers featured venturous themes with beautiful effects. So is the new Jungle Book a fun adventure, or does it just get lost in the wild?

Following the footsteps of its animated predecessor, The Jungle Book tells the story of Mowgli (Neel Sethi): a man cub who raised by wolves. Mowgli's life in the jungle is turned upside down when the vengeful Shere Khan (Idris Elba) makes it his mission to kill the child by any means necessary. In order to protect the wolves, Mowgli journeys with the black panther Bagheera (Ben Kingsley) to the man village where Mowgli can be protected from the likes of Khan. On the way, Mowgli encounters a number of characters such as massive python Kaa (Scarlett Johansson),  the gigantic orangutan King Louie (Christopher Walken) and the of course the lovable bear Baloo (Bill Murray). 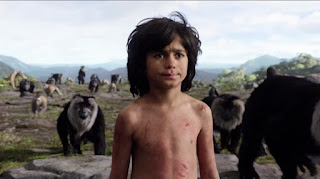 The story to this adaption was definitely adventurous. Throwing you right into the thick of things, the plot makes Mowgli's journey an entertaining one as his travel through the jungle is as fun as it is thrilling. Though the story's best feature was its sense of adventure, there were certain details in the  plot that I found enlightening.  The likes of explaining the law of the jungle and showing the relationship between Mowgli and the wolves helped to create a sense of complexity that was missing the in 1967 film. The only issue I had with this film's story was the narrative's pacing. While the fast pace made for a fun story, it did hinder some moments in the film; particularly the plot's message and the conclusion to the movie. The problems to this story did take away from the plot's overall effectiveness, but the issue circling this plot did not hurt The Jungle Book's presentation. 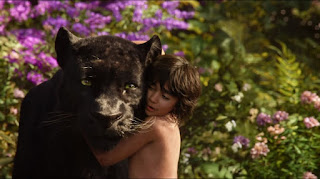 With a group of characters that make up The Jungle Book, it was good to see that the film's cast lived up to the story's inhabitants. The performances from the veteran actors were impressive to say the least as they brought a sense of practicality to the classic characters. I particularly like Idris Elba's performance as Shere Khan. Not only did the character have a little depth in this adaption, but Elba's performance as the tiger made this villain one to fear. The impact to the principal cast was not shocking, but the performance from Neel Sethi has definitely a surprise. The kid was green in some of his delivery (though that was to be expected) but Sethi brought the right amount energy to bring the character of Mowgli to life. While the performances were strong, the same thing could not be said about the characters' direction. The characters themselves were good, but because of the film's pacing it was difficult for these wild individuals to create solid connection with each other. Thankfully the casts performances more than made up for any shortcomings in the characters themselves. 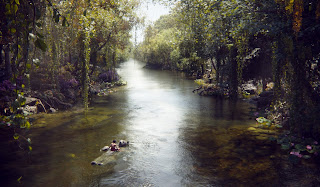 Just by watching the trailers to this film, I could tell that the The Jungle Book's spectacle was going to play a major role in the movie. When it came to the likes of effects and cinematography, The Jungle Book was simply beautiful see. The movie uses familiar concepts such as having full cg character, but it handles each aspect to the best their abilities. Adding to the film's visuals was surprisingly the movie's 3D format. It is not often that I commend a movie for using this gimmick, but I could not deny that The Jungle Book's 3D was well done as it complimented the film's adventurous themes. The score by John Debney worked to the movie's advantage by giving it exciting themes, and bringing back the songs from the 1967 animated feature. A sense of nostalgia came over me when heard the classic songs; but while they were great to hear, the musical numbers were a tad out of place. The likes of “The Bear Necessities” managed to work in the context of the film, but King Louie singing “I Wanna Be Like You” came out of nowhere and the song did not fit for movie's overall concept (though this is not to say that Christopher Walken's take on the number was bad)

The Jungle Book was definitely a fun time at the movies. The film's presentation was hindered to the likes of pacing and inconsistent direction, but the good performances and strong sense spectacle more than made up for the glaring issues. It can be a little rough getting through this adventure but The Jungle Book still managed to be a faithful interpretation to the Disney Classic.

Posted by Something Cinematic at 4:00 PM