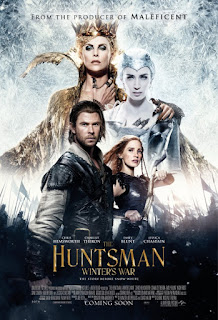 Once upon a time there was a film called Snow White and the Huntsman. The film hit theaters in the summer of 2012 and brought a new take to the classic fairy tale. However the film was met with mediocrity as the reviews for the blockbuster fairy tale were not welcoming. However the movie did  well enough in the box office to the point where it could garner a sequel. So with Snow White getting her happily every after, how could filmmakers create another movie in this fantasy series? The answer is centering on the second part of the 2012 movie: The Huntsman. Taking center stage is none other than Chris Hemsworth as reprises his role in the new film-The Huntsman: Winter's War. Directed by Cedric Nicolas-Troyan (whom was the 2nd Unit Director to Snow White and the Huntsman), the new film was advertised to be the story before the first movie as it would tell the origin of Eric the Huntsman. With a sense of fantasy and adventure in its trailer, this continuation looked promising; but was The Huntsman a blockbuster filled with magic or was it just a grim experience?

The tale to The Huntsman centers on Eric who tasked to track down the Evil Queen Ravenna's (Charlize Theron) magic mirror that seems to be wrecking havoc on Snow White's kingdom. Unfortunately Eric is not the only one searching for the item as the Snow Queen, and Ravenna's sister, Freya (Emily Blunt) seeks the power of the mirror. On this journey The Huntsman encounters Sara (Jessica Chastain): the love of Eric's life whom he believed to be dead. Together with a company of dwarves (Nick Frost, Rob Brydon, Sheridan Smith and Alexandra Roache) the former Huntsmen set off to find the mirror before Freya's forces can retrieve the mystical object. 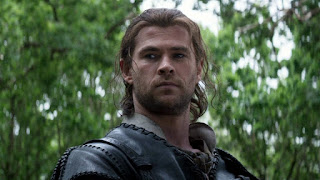 Before diving into this story, I must address the incoherent nature to this film's marketing. Everything about The Huntsman suggested that the film would center on Eric's story before the events of Snow White and the Huntsman, but that could not be farther from the truth as the protagonist's backstory only encompasses the movie's first act. Granted material for this movie suggested that the plot would focus after the events of the 2012 film, but the fact that movie did not live up to this concept was a bit unnerving. Fortunately for the movie I am not here to critique its marketing. However even with the film's poor advertising, the story to this film was not one the most glorious of tales. While I admired the plot's adventurous nature, the story to The Huntsman was hurt from generic elements and obvious twists. If the story was structured differently, like having the backstory and main plot coincide with each, then I feel that this tale would have had a stronger presence. Yet the story to this fantasy film was one that had little magic to it; but while it lacked any substance, there was just enough entertainment to this plot to make an tolerable tale. 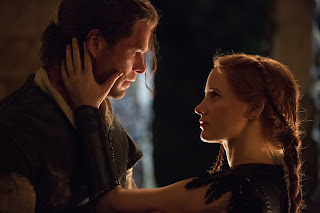 While the story was lacking, the film did feature a strong cast. The likes of Chris Hemsworth, Jessica Chastain, Emily Blunt and Charlize Theron certainly made for a commendable ensemble, but the cast to The Huntsman could only do so much for the characters themselves. The cast of characters were by no mean tedious or nonsensical, but I could not deny that the each player lacked fluent direction and complex development. Thankfully the cast made up for this issue with their good performances. Chris Hemsworth and Jessica Chastain made for engaging protagonist; while Emily Blunt was a convincing antagonist as the Ice Queen. Charlize Theron did not have a lot of screen time as Ravenna, but she made every moment count by making the Evil Queen a villain who loves her own infamy. The Dwarves were perhaps the biggest surprise in the cast as each of them were delightful supporting characters. Also a part of the cast was Liam Neeson as the film's narrator; and though his presence did not boost the effectiveness of this fact, having Neeson a part of any ensemble is never a bad thing in my book. 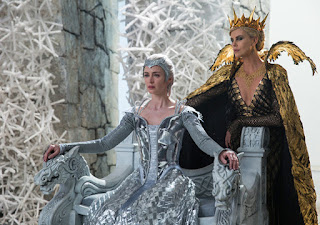 The technical elements to The Huntsman was nothing noteworthy; but that is not to say this aspect was ineffective. The effects to this film felt true to the movie's fantasy's element, while the cinematography was in sync to the look of its predecessor (though this movie was much lighter in its visuals). The movie's action was fairly standard. Though this element led to some exciting moments, there was not much to the action that I found to be awe inspiring. The music by James Newton Howard was appropriate for the film as the score created a tune that was both adventurous and magical.

The Huntsman: Winter's War is definitely not a must see for this year, but I would be remiss to completely disregard this blockbuster. The performance of this movie was hindered from its obvious plot and its directionless characters, but that is not to say that this Fantasy Spin-off does not have its share of merits. While things were obvious, the movie was still a fun adventure filled with performances that were both solid and entertaining. The Huntsman may not be the fairest of the them all, but that by no means makes this Fantasy Adventure a grim experience.

Posted by Something Cinematic at 9:30 AM