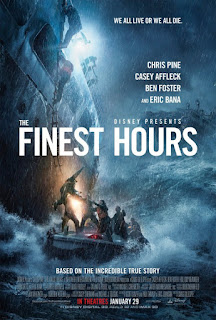 The sea can be a very dangerous place for the likes of ships as you never know what can happen out there. Fortunately the likes of U.S Coast Guard are trained to deal with dangerous oceanic situations such as search and rescue missions. On many occasions the Coast Guard have dealt with thrivolous missions saving ships from the harsh waters; but perhaps one of the most iconic incidents was the rescue of the SS Pendleton. In 1952 the SS Pendleton was torn in half leaving its crew stranded on a sinking ship. However coast guard Bernard Webber led the CG 36500 to retrieve the crewmen, which led to his team saving 33 men. This incident has become a major part in the Coast Guard's history to the point where the tale can be seen on the silver in the new adventure film: The Finest Hours. Directed by Craig Gillepsi the film adapts the events from the 2009 novel, "The Finest Hours: The True Story of the U.S Coast Guards Most Daring Sea Rescue". With such a story to tell, does The Finest Hours ride the waves of success, or does this drama sink to the bottom of the sea?

The plot to The Finest Hours centers Bernie Webber (portrayed by Chris Pine). The story centers on Bernie's life in the Coast Guard and his personal affairs as Bernie gets engaged to Miriam (portrayed by Holliday Grainger). However when word gets out that the SS Pendleton is sinking, Bernie is tasked to save the ship's crew along with Richard Livesly (portrayed by Ben Foster), Andrew Fitzgerald (portrayed by Kyle Gallner) and Ervin Maske (portyaed by James Magaro). As Bernie sails the harsh waters, the crew of Pendleton are led by engineer Ray Sybert (Casey Affleck) as they try to remain afloat during the dangerous storm. 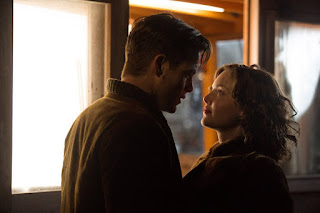 The story to The Finest Hours was a bit rocky. The film throws you right into the thick of things which I found to be detraction to the movie's presentation. Plot points like Bernie's previous mission, and even the romantic story of Bernie and Miriam, felt either rushed or just lacked complexity. This plot definitely had an issue when it came substance, but that is not to say that the story did not have its share of merits. I particularly liked the story of Pendelton Crew. Seeing these men sailing half a ship was both intriguing and thrilling. It also should be noted that the overall plot does get better as it progresses. When the crew CG 36500 begin their mission, the plot does pick as watching Bernie and others getting through the storm was very much exciting. While this plot needed more detail to it, I do believe the story captured the historic events in a cinematic fashion. 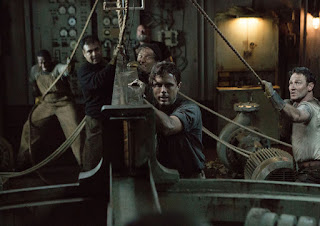 The cast to this film was quite vast as it featured many solid actors. Chris Pine and Casey Affleck do a wonderful job as the two leads. Bernie Webber and Ray Sybert made for strong protagonists that I could easily get behind. The supporting cast had it share of strengths as well with the likes of Ben Foster, Graham McTavish and Kyle Gallner providing engaging roles as their respected characters. The only issue I had with the cast was the direction of the characters themselves. Take Miriam for example. Holiday Grainger provides a good performances as Bernie's fiance, but her character had little development; which made her direction underwhelming. The same thing can be said about Eric Bana as Chief Warran Officer Daniel Cluff. Bana provides a solid supporting role but his character had little to no impact on the film. The characterization of this cast lacked cohesive development, but fortunately the ensemble more than makes for this with it their sturdy performances. 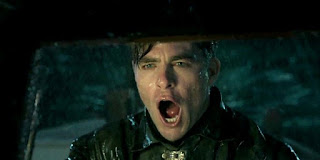 The effects behind this movie could be a hit and miss. The CGI used in the movie was noticeable, but it did work to movie's favor by blending with Javier Aguirresarobe's cinematography. I saw this film in 3D but I found that this element provided nothing to the experience. This factor could have been used to strengthen the movie's more atmospheric moments, but the 3D added little to my imagination. The score by Carter Burwell was good enough. The music does take its time to stand out, but once things get going the score meshes well with the film's adventurous direction. While certain technical elements could have been stronger, I do think that these factors worked well together when it came to the movie's boating scenes. These sequences were done admirably well as they captured the idea of being on the stormy sea and how intense a moment like that can be. If anything this film is worth a watch for its “action-packed” sailing sequences.

The Finest Hours definitely has a shaky time on the silver screen. The narrative to the story and the characters' development leave film with little substance. However the film makes up for its faults with good performances and exciting sequences. It may not be flawless but The Finest Hours does manage to remain afloat as I think this cinematic interpretation is worthy of a watch.