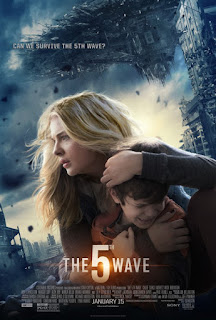 Movies based on popular novels have certainly lost a bit of steam in recent years. Though this sub genre plays a role in the world of entertainment with hit franchises like Harry Potter and The Hunger Games, this trend has definitely died down. However even with this diminishing presence in the trend, studios continue to release movies based on young adult novels. The latest film to capture this subgenre takes moviegoers in the midst of an alien invasion. This movie is The 5th Wave which is based on the popular novel series by Rick Yancy. Directed by J.Blackson, this adaptation looked to have some potential as the previews featured a subtle (yet devastating) alien invasion. So does The 5th Wave bring the fight or is this sci-fi thriller just another film based on a young adult novel?

The 5th Wave tells the tale of Cassie Sullivan (Chloe Grace Moretz): a typical high schoolers who biggest worries was dealing with boys. However her life is turned upside down when the world is invaded by an extra terrestrial force. After waves of calculated attacks, the human race finds itself on the brink of destruction. After a military group led by Colonel Vosch (Liev Schreiber) takes Cassie's younger brother Sam (Zachery Arthur) to be trained with the other young recruits, Cassie goes on a quest to get Sammy back. On the way Cassie meets the mysterious Evan Walker (Alex Roe) who is content on helping the young girl. As Sammy and his squad leader Ben Parish (Nick Robinson) train to become soldiers, they and Cassie discover that there is more to this invasion then what there appears to be. 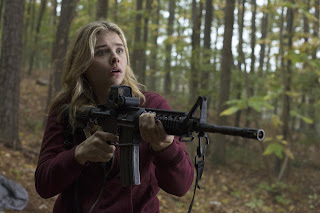 The story behind this sci-fi thriller had some interesting concepts. The narrative of seeing these characters surviving a alien invasion would have worked thanks to ideas presented in the story. However it was the plot's execution that hurt the movie's presentation. The plot points in this film were so obvious that you could see what was going happen not just a mile away, but the length of an entire continent. It did not help matters that the narrative was not interesting. The story of Cassie getting her brother back seemed simple enough, but the pacing of this heroine's story became stale and cliched. Actually I found the subplot of Ben Parish and his squad to be the more intriguing tale. Yes this part of the tale had an issue in the matter of being complex, but the idea behind the team's tale showcased the overall plot's stronger elements. The film had all the makings of having a strong story, but in the end the execution behind this adaption made The 5th Wave's plot feel like the definition of standard storytelling. 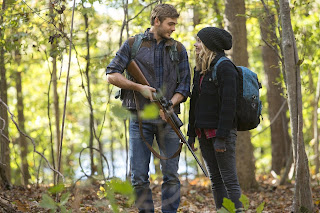 Thankfully The 5th Wave had a strong lead. Chloe Grace Moretz was solid as Cassie as the young protagonist's development was quite understandable and Moretz's performance felt genuine. If there was one area that did not work favor of this character it would be her romantic chemistry with Evan. The relationship between these two characters was rather cliched. The other problem with this duo's romance was character of Evan Walker. Though Alex Roes gives a decent performance, the character had little to no development as he came off as a typical “Gary Stu”. The rest of the cast was not much better. The supporting cast had some strength such as Ben Perish's character, but the for the most part the effectiveness of this group was lackluster. A cased point would be the tough as nails female soldier: Ringer (Maika Monroe). Monroe's performance was alright but Ringer was just a “Mary Sue” as she could accomplish everything but lacked in that thing called development. Then there was Liev Schriber as Colonel Vosch. Schriber provided a tolerable supporting performance but his character had little to no presence in the film. This leads to the villain of the film simply known as “The Others”. While there were interesting ideas in these shady aliens, The Others left no impact in this film's presentation. It was a good thing that Moretz carried this factor; otherwise the cast to The 5th Wave would have just been nonexistent. 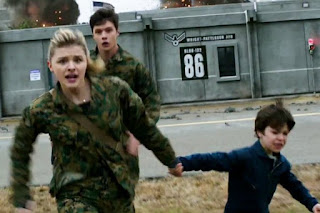 The technical elements to The 5th Wave seemed appropriate to the movie's concept. Given that this is a sci-fi film, the effects and cinematography to The 5th Wave were quite subtle. This did give the film some distinction as the direction was quite different. The score by Henry Jackman was also quite fitting for the movie as it captured the sci-fi themes to movie and blended it with the film's more thrilling aspects. The action to this movie was just alright. The sequences did work for the film, but there was nothing to really reflect upon when it came to the action of The 5th Wave. The directions to this movie was standard but it did manage to work for this sci-fi thriller.

The 5th Wave was by no means a bad film. The likes of Chloe Grace Moretz and good technical elements managed to save this film by giving it some distinction. However this sci-fi movie was rather generic in its approach as the likes character development and story provided nothing to keep me intrigued throughout the film's runtime. In the end The 5th Wave was a tolerable experience, but unfortunately I felt like that this was one alien invasion that could be skipped.

Posted by Something Cinematic at 2:07 PM