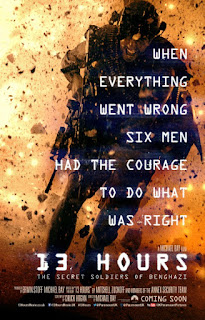 Movies based on true events are never an easy thing to critique. This subgenre of films is always tricky to review as you have gauge real events as if they were just a normal film. Nevertheless these movies continue to hit theaters and have played a role in all genres of films. The latest movie to take up this moniker is the war film-13 Hours: The Secret Soldiers of Benghazi. Based on the novel by Mitchell Zuckoff, the movie tells the story of the 6 soldiers who were apart of the Benghazi incident in 2012. This new war film is directed by none other than Michael Bay; and this factor did not fill me with excitement as my experience with Bay's films has never turned out well. However perhaps Bay could prove me wrong and maybe 13 Hours: The Secret Soldiers of Benghazi did in fact do this war story justice.

The Secret Soldiers of Benghazi tells the story of Jack Da Silvia (portrayed by John Kransinski) arriving in Benghazi where he is greeted by team leader Tyrone “Rone” Woods (portrayed by James Badge Dale) who gives Jack the layout of their mission in the country. However things escalate when the American ambassador is attacked by radical Libyians which leads to the six soldiers taking action. Eventually the soldiers must hold off the radicals as they try maintain their secret base and protect the CIA operatives stationed inside. 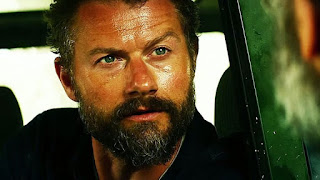 The concept behind this plot is thorough and it could have worked as an effective war story. However, when gauging this story as just a film plot, 13 Hours had major misconceptions in its execution. There were several points in the plot that I kept asking myself “what is going on?” So much transpired in this plot that it was hard to keep track of everything. This direction made some sense as the film deals with soldiers in a firefight; but I felt this theme could have been handled better. It did not help matters that the story had sporadic plot points. One moment you had CIA leader “The Chief” ( David Costabile) butting heads with Rone about the mission, and then a scene later the two were working together with no compromise being established. It was moments like this that made this plot daunting to sit through. It gets a little better as things progressed forward but by then it was hard for this war story to really grasp my attention. 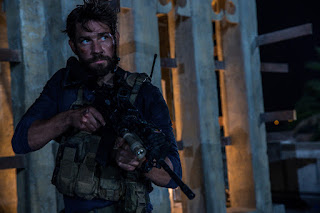 The cast to this film was a double edged sword. Performances from the likes of John Kransinski and James Badge Dale were quite effective to the movie's concept and the acting in general was good. However the characters themselves were a bit bland. While you do see some development in the six soldiers, it was not to make them fully fledged characters. In fact,when it came right down to it, these characters felt like typical soldiers characters and that made it hard to keep track of who was who. The rest of the cast was not much better. The Chief's portrayal came off as the typical authority figure character who was simply there to challenge Rone's ethics, and the transition of him being helpful was very inconstant. The other CIA characters were borderline useless while other soldier characters, who appear later in the film, they were just there to be there. Again the performances to this film were effective, but the characterization of these individuals was lacking in many areas. 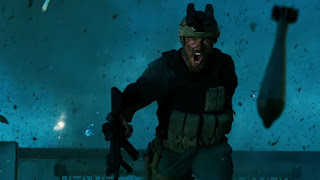 Technical aspects to 13 Hours did no help matters. The cinematography to this film was the definition of inconsistent. The film would feature a indicator for both the movie's locations and its live time.This element would jump from a simple text on the screen to a full title card that would pop up every now and again. While this direction was intended to capture the gravity of the situation, I felt like this element just made the movie distracting. The cinematography also did no favors to the action. Though the gruesome nature of the action was understandable, the camera work to this film made it incredibly difficult to really grasp the movie's more thrilling moments.

I think this movie meant well, but in the end this war film was hard to sit through. While the performances were good and the concept to the story was effective, the execution to this film made it feel like a massive mess. The Benghazi Incident was undoubtedly a gritty and tense situation, but unfortunately I do not believe 13 Hours captured these events thoroughly; nor did it work as a general movie.

Posted by Something Cinematic at 1:45 PM