The Hateful Eight Review: Tarantino's Eighth Film is a Dynamic and Stylish Western 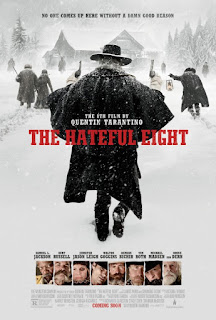 If there is one director who knows how to stand out it is Quentin Tarantino. Since 1992 the outlandish director has been a household name in the movie world with his various hits like Reservoir Dogs, Pulp Fiction, Inglorious Bastards and Django Unchained. Now in theaters is the eighth film from Tarantino: The Hateful Eight. Following the footsteps of his previous film, Tarantino sets his latest work in the old of the old west. Early in the movie's production, controversy circled The Hateful Eight as Tarantino cancelled the project due to the script being leaked online. However, after doing a live reading of the script, Tarantino changed his mind and production for the film began in 2014. So is The Hateful Eight another hit from Quentin Tarantino, or was this western better left out in the cold?

The Hateful Eight centers on bounty hunter John Ruth (Kurt Russell) taking convicted criminal Daisy Domergue (Jennifer Jason Leigh) to be hanged in the town of Red Rock. After meeting fellow bounty hunter Major Marquis Warren (Samuel L Jackson) and Red Rock's new sheriff and former Lost-Causer: Chris Mannix (Walton Goggins), a blizzard prevents the group from reaching the town and they are forced to find shelter in a stagecoach lounge called Minnie's Haberdashery. There the group meets the other guests: Oswaldo Mobary (Tim Roth), Bob (Damien Bichir), Joe Gage (Michael Madsen) and General Sanford Smithers (Bruce Dern). As the residents of Minnie's Haberdashery are buried in snow, John quickly comes to realize that one of the eight is not who he says he is. 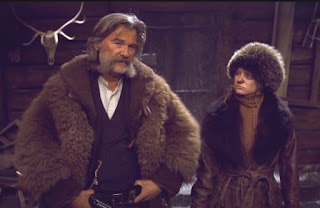 The plot to this western was one that felt very much like a Quentin Tarantino story. The format to the plot played to Tarantino's strengths as the story was told in individual acts. Yet while the plot had traits from previous Taratino films this was not to say that the story did not have its own strengths. The story's concept of taking place in one place gave the film a sense of atmosphere that captured the tone and setting behind this movie. The pacing to the story could be an issue. It takes a considerable amount of time before the plot really gets underway; which could be daunting at times. However the slow pacing managed to work in the film's favor as the detailed narrative to the story became relevant over time. Perhaps the narrative was too detailed for its own good, but this plot managed to work as this western tale was quite unique for its genre.

Tarantino's films are known for having a strong cast and The Hateful Eight was no exception as a variety of talent was featured in this ensemble. Kurt Russell and Samuel L Jackson made for great leads as the two bounty hunters. While there may not have been much development for either hunter, both John Ruth and Marquis were solid characters that I could not help but find engaging. Jennifer Jason Leigh's performance was impressive to say the least as Dasiy Domergue was just a character you could love to hate. Even with the movie's strong leads, I found that Walton Goggins performance as Chirs Mannix was just as memorable as the film's prominent players. Other cast members like Tim Roth and Michael Madsen were there to be supporting characters; but that certainly did not stop actors such as Tim Roth from shining in every scene that he was in. In the end this cast was quite coherent together; and with surprise appearance from Channing Tatum, this ensemble was definitely one to remember. 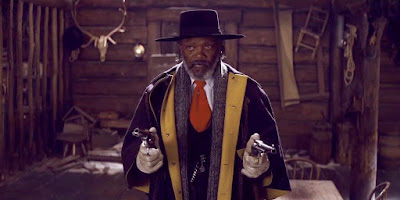 Being a Tarantino film it was expected that The Hateful Eight would have a sense of style in its technical elements; which it did. The cinematography may not have been awe inspiring, but it did work for both Tarantino's direction as well as the genre of westerns. The action to the film, though limited, felt very much like the gritty sequences that I am use to seeing in Tarantino's work. Then there was the music. The score to this western was composed by the legendary Ennio Morricone: the man behind the music of The Dollar Trilogy. The music to The Hateful Eight was fitting for both the movie's tone and its time period. Though I questioned the idea using rock songs in the film's soundtrack but, fortunately, this direction was not a major distraction.

The Hateful Eight is definitely another solid film from Quentin Tarantino. Though the film could be a little excessive in areas such as pacing and direction, the movie definitely made for any shortcomings with its strong cast and stylish concepts. It is hard to rank this film with Tarantino's previous work, but I can say that The Hateful Eight made for a dynamic western that only this director could have put together.

Posted by Something Cinematic at 1:41 PM