The 33 Review: Survival Drama Digs Out a Solid Story and Cast 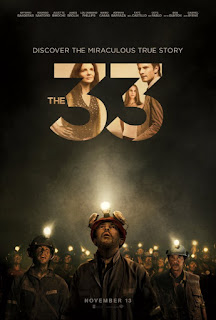 Either I am just catching onto the trend or 2015 has had a lot of films pertaining to the real life events. Whether it has been major blockbuster or simple dramas this film type has been strong throughout this year. The latest film to be apart of this trend seems to be the latter. In 2010, a major mining disaster trapped 33 miners in the caves of Chile. After months of harsh living the miners survived, and because of it we now have the the drama: The 33. Directed by Patricia Riggen, the film focuses on the novel by Hector Tobar: Deep Down Dark; which retells the events of the incident. With so many films based on real events, can this survival drama stand out from the rest or does The 33 find itself buried?

As stated, the story captures the event of the 2010 Chile Mining Disaster. The plot centers on the miners including Mario Sepulveda (Antonio Banderas), Luis Don Lucho (Lou Diamond Phillips), Alex Vega (Mario Casas) and the other 30 workers. As the film shows the miners struggle, the story also centers on the people trying to get the thirty three men out; which includes Laurence Golborne (Rodrigo Santoro), Andre Sougarret (Gabriel Bryne), Maria Segovia (Juliette Binoche) and other family members to the miners. 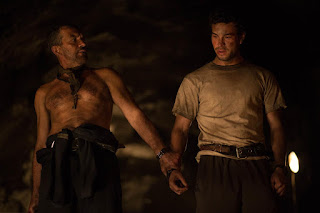 When it came down to the story's concepts, I felt that The 33 was strong in its approach. The plot captured the struggle of the miners as well as the complications of getting the thirty three out safely. The story also had strong themes like having hope in a dire situation as well as the extent people go to when trying to rescue someone. The only issue that I found with the story was its structure. The way the story played out was effective, but I felt like the plot could be repetitive as it would jump backed and forth from the miners to the rescuers. However, even with it issues, the plot still worked as its tense atmosphere; which was effective all the way to the film's climax. 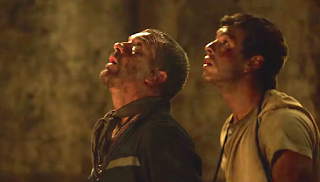 This film featured one massive cast. Along with the names already mention were the likes of Juan Pablo Raba, Cote De Pablo, Kate del Castillo, Jacob Vargas, James Brolin, Bob Gunton and this is just names a few. Having a cast like this is not an easy thing to pull off as there are so many characters to establish. Fortunately for the film I believe that The 33 did well enough to present a strong ensemble. Antonio Banderas had an engaging performances as Mario Sepulveda. This role allowed Banderas to show his range as Mario was a character that could be charismatic as well as dramatic. Even though Banderas had top billing, this is not to say that the rest of cast did not have engaging performances. Most of the cast had great performances worthy of any drama; especially when it came to the miners. For example: there was moment where Jose Henriquez (Marco Trevino) comforts Dario (Juan Pablo Raba). While it was a quick scene, both Tevino and Pablo Raba did a fantastic job in creating the right drama for the moment. The cast itself may not have been the most influential group that I have seen this year, but it was still an impressive ensemble to say the least. 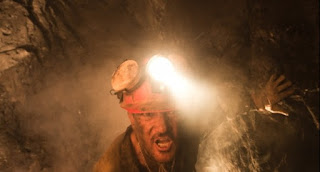 With a film like The 33, there was no need for any outlandish technical elements. The setting and cinematography for the film were quite fitting as it captured the harshness of being stuck in a cave. The cinematography also did a great job with meshing the film with the news footage that dealt with the incident. This movie also featured one of the last scores from the late James Horner. The music to the film not only fit the tone but it also captured the heritage of Chile. In this matter, Patricia Riggen's direction was quite subtle; but I felt that this approach seemed to work in the film's favor.

While it may not be the definitive film based on the true events , The 33 was still a solid experience. The film captured the drama to the incident in a way that was both tense and engaging. With its strong cast and its fitting direction, The 33 is a film that (at the very least) captures the concept of survival and remaining hopeful even in the most drastic of times.

Posted by Something Cinematic at 8:18 AM