The Peanuts Movie Review: I Tip My Hat To You Charlie Brown 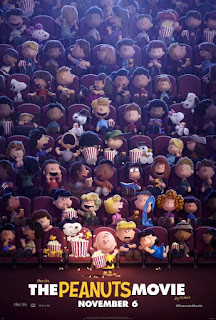 On October 2, 1950 cartoonist Charles M. Schultz changed the comic world as readers were introduced to Charlie Brown and his friends in “Peanuts”. Since then the likes of Charlie Brown, Snoopy and the rest of the Peanuts gang have become a household name in pop culture as their stories have been told in variety of mediums; such as television specials and a musical. Yet with the comic strip being so famous, it is hard to imagine that Peanuts have never had a feature length film hit the silver screen. That all changed this year when Blue Sky Studios released The Peanuts Movie in theaters. Directed by Steve Martino as well as written by Craig and Bryan Schultz (whom are the son and grandson of Charles), The Peanuts Movie commemorates the 65 year anniversary of the comic strip. So now that the film is out, does this movie do the Peanuts gang justice or does it have this Film Adventurer saying “Good Grief”?

The story to The Peanuts Movie of course follows the adventures of Charlie Brown (Noah Schnapp). Tired of being a failure, Charlie Brown seeks to change himself in any way he can. A major incentive to Charlie's motivation comes in the form the Little Red Head Girl: a new kid whom Charlie Brown develops a crush on. As Charlie tries everything to impress this girl, Snoopy meanwhile does his thing by creating a story of him finding love and taking on his old nemesis: the Red Barron. 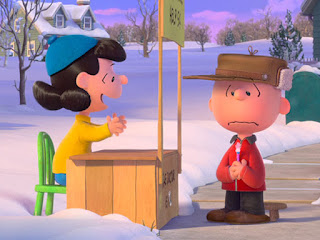 As you can see, there is not much to the story of Peanuts. In fact when it comes right down to it: Peanuts' plot is as simple as you can get. Is this a bad thing? Absolutely not! Though it does use some generic plot element, the story more then makes up for that with its execution. The themes in Charlie Brown's story gave the film a sense of morality that anyone (no matter their age) could find engaging. Not only did the plot have strong elements, but it also fit in the world of Peanuts. The structure to the plot played out in a way that felt like a homage to Charles Schultz's stories; whether it a scene with Lucy giving “advice” to Charlie Brown or Snoopy's subplot. In just about every aspect, this plot truly commemorated the Peanuts' tales; all while working as a film. 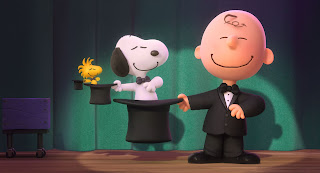 While Charlie Brown is a character that is well known in pop culture, the question here is could Chuck work as a movie lead? The answer to this question is a definite yes. In a film such as this, a character like Charlie Brown would deal with some kind of development where he would inevitably learn a lesson by the end of film. While that direction was part of Charlie Brown's character, I liked how the film went about executing this development. Rather then just having Charlie Brown going through motions and then learning a lesson at the end of the film, the movie shows the true strength of Charlie's character in several scenes; which turned this classic protagonist into a movie lead that you could not help but love. Along with Charlie Brown were the rest of the Peanuts gang. In one way or another, all the Peanuts stood out in this film; from Lucy's aggressive nature, Linus' advice, Peppermint Patty's Tom Boy antics or Schroeder's piano playing. Even the Little Red Haired Girl, while being a plot device, had moments that made her character stand out. Then there was Peanuts' regular show stealer: Snoopy. As expected Snoopy was the film's comic relief and he certainly made every moment count. Thankfully Snoopy's scene never felt excessive or distracting. In fact to put it simply: Snoopy was Snoopy. 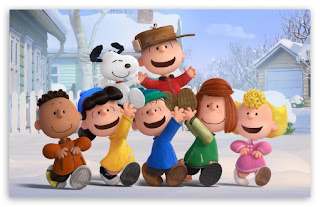 If the story and characters were not enough to make this movie worthwhile, then the animation definitely made The Peanuts Movie an experience. The animation to the film not only used the best aspects in today's technology, but it also captured the spirit of Charles Schultz's artwork by keeping a sense of a hand drawn cartoon. Along with the stellar animation was the score from Christophe Beck. The music to the film was rich with color and help to create the right tone for Peanuts. Even songs from Meghan Trainor's managed to fit comfortably in this film. Whether it was the animation or the music, the technical directions to The Peanuts Movie seemed to do one thing: pay tribute to the comic strip; and I for one think this animated feature exceeded in this accomplishment.

I never imagined that would find myself loving this film as I did, but The Peanuts Movie exceeded all my expectations. The film not only does the Charles Schultz's work justice, but it works so well as a family film thanks to its simplistic story and engaging characters. Along with a terrific animation, The Peanuts Movie is not just one of the best animated films to hit screens this year; but it is in fact one of the best movies of 2015.

Posted by Something Cinematic at 8:07 AM