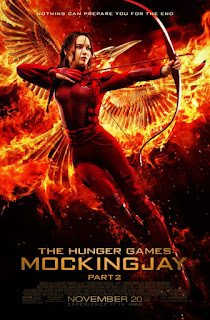 Taking place immediately after the first part, Part 2 starts with Katniss Everdeen (Jennifer Lawrence) preparing for war. In a desperate attempt, Katniss heads to the Capital to put an end to President Snow (Donald Sutherland). With the help of Peeta (Josh Hutcherson), Gale (Liam Hemsworth), Finnick (Sam Claflin) and other District 13 members, Katniss does her best to put her plan into motion; but surviving this game is easier said than done. 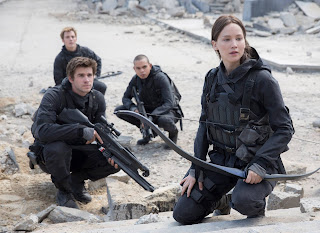 When I watched Mockingjay Part 1, I found the story to be a tad underwhelming. It did not dawn on me until recently the true effectiveness of Part 1's plot. Capturing themes from the its predecessors, Part 1 was meant to capture ideas like how to present oneself on camera and trying to stir attention. This  could only mean that Part 2's story would be centered on action in a way that would reflect the games from the first two films; and sure enough it did. The action certainly drove Mockingjay Part 2's plot, and it kept the story at a quick pace. I found the pacing to be effective seeing that this film is the second part to much larger story, and a act two of a play tends to go quicker then act one. However this was not to say there were no twists or turns in Part 2's plot. On the contrary there were many twist to the story that I found to be effective in this conclusion's delivery. The plot played out in a way that brought the overall story to The Hunger Games to a full circle, and it made the ending to the tale truly satisfying. 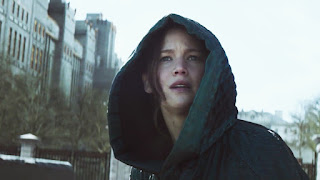 Over the years, I have come to like the cast of the Hunger Games; so I could only hope that Mockingjay Part 2 would be a good send off to these characters. To my luck it was as the cast to the Hunger Games went all out before the curtain closed. Jennifer Lawrence once again had a strong performance as Katniss; as did Josh Hutcherson as Peeta. In Peeta's case he went into a bold direction in this film, and I felt that Hutcherson really pulled off the conflict that Peeta was going through in his performance.Together Lawrence and Hutcherson were able to create chemistry that was tense and touching. Along with the great performances from Lawrence and Hutcherson was a solid role from Liam Hemsworth as Gale. Gale has been rather underwhelming in the series, but the chatacter has finally shown his worth in Mockingjay as the films have allowed the character to develop. I found myself with every character: like Woody Harrelson as Haymitch,  Sam Claflin as Finnick  Natalie Dormer as Cressida and Willow Shields as Prim. Everyone in this cast, no matter the size of their part, had a role to play in final movie. If anything this film proved that The Hunger Games has had a well structured cast that I came to enjoy, and it was good to see this ensemble was able to go out on a high note. 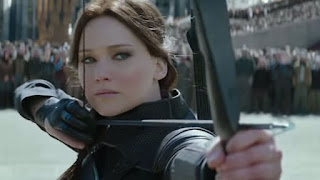 With Part 2 being more action oriented, it was pleasing to see this factor pay off. The action to the film not only worked as a blockbuster, but  the sequences fitted into the concepts behind the franchise. Even the scene with the sewer mutants (a moment that I found puzzling in the preview) was great; in fact that may have been the film's best action sequence. Along with this grand factor was the score from James Newton Howard. Howard has composed the music for the whole series, but I felt that this film's score was best in not just in The Hunger Games soundtrack, but perhaps Newton Howard's entire repertoire. Elements such as cinematography and effects may not have gone above and beyond like other factors, but they still managed in the context of this film series.

The Hunger Games: Mockingjay Part 2 turned to be a fitting conclusion to this series. Every element, from story to the technical factors, managed to work in favor for both this movie and the franchise. I was not a big fan of the Hunger Games since this journey started in 2012, but I can say the series has my respect as I am pleased to tip my hat to Mockingjay Part 2 for being a movie worthy to the Hunger Games name; and just being a solid finale.