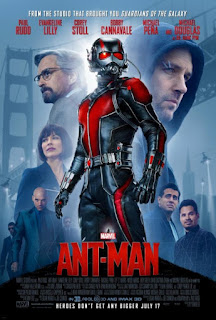 The Marvel Cinematic Universe continues to get bigger and bigger. We have seen the likes of The Avengers and Guardians of The Galaxy grace the big screen; while on the small screen has featured the likes of “Agents of SHIELD” as well as “Daredevil”. Now on the silver screen is Marvel's smallest superhero: Ant-Man. Though the character has played a major role in Marvel Comics, Ant-Man has been all but unknown in the eyes of general audience. So a movie based on the character would not be easy to accomplish. However director/writer Edgar Wright was content in making this movie happen, and Marvel was happy enough to produce it. However the film went through some major changes as Wright left the project. Fortunately director Peyton Reed came in to helm the project and after some revision, the blockbuster was set to arrive in the 2015 summer season. So with the latest Marvel film now out, does Ant-Man size up or is the movie the studio's first flop?

The story of Ant-Man follows Scott Lang(Paul Rudd): a former ex-con trying to redeem himself for his past crimes. When things do not go according to plan, Scott decides to return to a life of stealing. However the house he robs belongs to retired scientist Hank Pym (Michael Douglas).  Scott steals is an odd looking suit which he discovers has the ability to shrink the wearer in size. Scott finds out that Hank Pym was once a hero named Ant-Man; and Hank has been watching Lang so he can take up Pym's mantle. With the help of Hank's daughter Hope (Evangeline Lilly) and Scott's Crew (Michael Pena, Tip T.I  Harris and David Dastmalchian), Scott becomes the Ant-Man and must steal from Darren Cross (Corey Stoll) who is bent on using Hank's formula as a weapon. 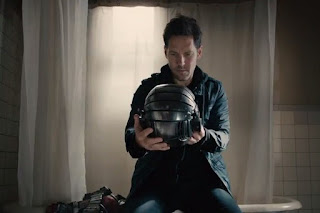 The plot to Ant-Man was rather straightforward; which was not a bad thing. The story definitely stayed true to its  concepts. The origin story element was quite different from previous superhero movies. The idea of a new character taking up an old hero's mantle is something uncommon in superhero movies; and Ant-Man did not disappoint in executing this concept as the tale of the two Ant-Men was done well. The other major element to the story was the heist. Like most heist movie, the film's plot centered on the crime at hand, and it build the significance of the heist itself.  What I found so interesting about this element was how the storytellers were able to mesh the heist factor with the superhero concept  and make it work. The only issue I had with the story was its pacing. It was not  that the pacing was to quick or to slow; but rather it could be off putting at times; which made certain moments hard to follow. Yet even with the pacing, I found myself enjoying this plot as it did justice to the character of Ant-Man. 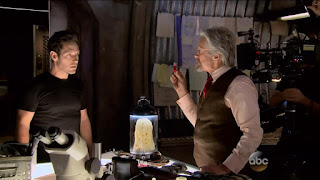 Like most ensemble from Marvel, the cast to Ant-Man was solid. Paul Rudd made for a charismatic lead as Scott Lang. Scott was a character that you could easily get hind, and the role allowed Paul to show both his comedic and dramatic side. Along with Rudd's great performance was Michael Douglas as Hank Pym. It was interesting to see Douglas in a role like Hank Pym as it was one that I could not see the actor ever playing. However the actor did a splendid job as the former Ant-Man and his chemistry with Paul Rudd was indeed effective. Evangeline Lilly was good as Hope Van Dyne. Admittedly I was hoping to see more from her, but there was enough from  Lilly to deliver a strong performance. Scott's crew was also likable. Sure Michael Pena as Luis could be a bit excessive as a comic relief character, but he (as well as the other two) were likable; and they had a part to play in this film. Then there was Corey Stoll as Darren Cross. Cross was not the most compelling of Marvel antagonists as he could be a bit cliché in his presence. However Cross's character was still understandable, and Storey' performance was by no means bad. Add appearances from members of the Marvel alumni and you have a cast fitting for the MCU. 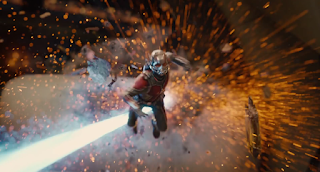 Of all the things that made up Ant-Man, the strongest elements was its effects and spectacle. The shrinking sequences were unique as they blended the effects with great cinematography. The world around Ant-Man truly looked, and felt, massive. This element also led to some impressive fight sequences. The action moments of Ant-Man were creative as they fluently use the shrinking element to create spectacular sequence; such as the heist itself and Ant-Man vs Yellowjacket. The score by Christophe Beck was satisfying. It was not the memorable score that I have heard from a comic book movie, but the music was still fitting to the concept of superheroes. When it came down to it, the technical elements to this film were definitely fitting to a character like Ant-Man.

Ant-Man was a fun little superhero film (and that pun was intended). The story and characters, while not perfect, still fit both the concept as well as the title of Ant-Man. Plus the effects made the movie feel larger then life. Ant-Man may not be Marvel's biggest film, but this blockbuster was both a fun summer film, and it definitely belongs in the Marvel Cinematic Universe.

Posted by Something Cinematic at 11:21 AM