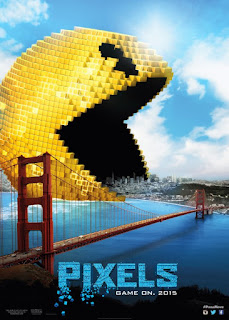 Videos games have certainly come a long way from the likes of pong. These days the world of gaming is filled with complex stories and out of this world mechanics. Yet, even with the advancements, we cannot forget the time when kids would get their quarters ready and head to arcade. So what happens when aliens attack the world using 80's video games? Apparently you get the new sci-fi comedy: Pixels. Directed by Chris Columbus, Pixels brings the likes of Pac Man, Centipede and Donkey Kong to the silver screen in a rather unique way While the movie presented a intriguing concept, its factors going against it. For starters video games rarely make good movies. Not to mention that the film is produced and stars Adam Sandler; and the comedian's recent track record speaks for itself. So as you can imagine the factors that make up Pixels were not comforting. However, instead of getting a game over, perhaps this comedy could prove this Film Adventurer wrong.

The story of Pixels centers on Adam Sandler who plays former video game expert Sam Brenner. Living a unsatisfied life, Sam is called on by his friend , who just so happens to the President of the United States, Will (Kevin James) to help with a unusual problem. It turns out that an alien force has invaded Earth and their means of attack is creating real life video games. In order to stop the threat, Sam is joined by conspiracy theorist Ludlow Lamonsoff (Josh Gad), former rival Eddie Plant (Peter Dinklage) and weapon developer Violet van Patten (Michelle Monaghan) and together the group has to play to save the Earth. 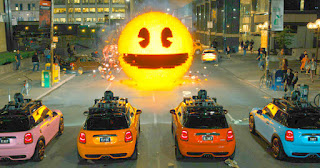 The story of Pixels was a case of what you see is what you get. The plot to this comedy had no major surprises to it, and its structure is fairly straightforward. This was both a good and bad thing. On one hand the story comes off as generic by playing to the comedy genre's more notable plot points. Then again, because it was so straightforward, the plot stays true to its concept. The plot certainly stuck to the ideas of aliens and video games, and it did make the story entertaining(even if it was still flawed). The only other issue I had with Pixels' plot was its pacing. The pacing would jump around and while it was not hard to follow it still made the story's flow feel sporadic. Yet even with the issue I had with the film's story, I found myself being entertained and feeling that this video game story could have been a lot worse. 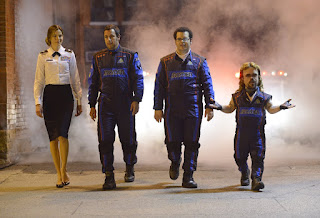 Being a movie starring Adam Sandler, I did not have the best confidence in the cast. However this comedic ensemble proved me wrong; to some degree that is. Though Adam Sandler as Sam Brenner fell under the characteristics that many comedy protagonists suffer from, I have to admit that Brenner had traits that I came to like. The same thing can be said about Kevin James as Will. The character played to traits that James is known for; but for the most part: Kevin James came off fairly likable. Michelle Monagha did a great job as Violet, but she did come off as a typical love interest. The true show-stealers of Pixels though were Josh Gad and Peter Dinklage. While Gad's Ludlow centered on character traits that I absolutely despise, I cannot deny that the actor made every moment worthwhile to the point where I could not help but enjoy “The Wonder Kid”. Peter Dinklage as Eddie Plant could be a bit eccentric, but there was no denying that this character played to the charisma that Dinklage is known for providing. Add appearances from the likes of Brian Cox, Jane Krakowski as well as Sean Bean and you had a cast that, while not solid, was still delightful to see. 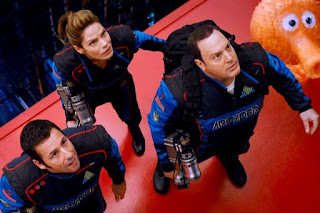 Watching the previews for this, it was clear that Pixels was going to have effects that were meant to compliment the video games of the 80's; and thankfully: Pixels did not disappoint in this element. The effects to Pixels were creative as they captured the idea of pixelated video games. What also help this factor was the direction in cinematography as it captured the mechanics to video games such as Donkey Kong . Along with the movie's effects was Pixels sense of humor. The comedy to this film was bit hit and miss. Some of the jokes were indeed funny (though they were not laugh out loud funny), but then were some comedic bits that were standard to today's comedies. Thankfully the lower comedic moments could have been worse but their presence in Pixels still irritated me. Still, even though it had some issues, the humor to Pixels managed to work to the movie's concepts.

Pixels is a case of what you see is what you get; and that is not a bad thing. While there are issues in the likes of story, characters and comedy, these factors managed to work in favor of the film's concept. What made Pixels work was its effects and tone as they both showed a sense of love to classic video games. In the end Pixels may not have been the strongest movie based on a video game, but it still made for an entertaining blockbuster: and it could have been a lot worse.

Posted by Something Cinematic at 9:41 AM