Well the moment has finally arrived. After months of speculation and anticipation, the first trailer for Star Wars: The Last Jedi has finally hit the scene. The preview for the next chapter in the Star Wars Saga arrived last week during the annual Star Wars Celebration event which took place this past weekend. Since its release fans and moviegoers have done nothing but talk about the new preview which is no surprise as the trailer delivered in both speculation and excitement. While the preview is only two minutes in length the content of the trailer features several moments and questions that are hard to ignore. While there are many moments that are noteworthy and worth pandering these are the six points that left me speculating about Star Wars: The Last Jedi.

Rey's Training
Since the finale of Star Wars: The Force Awakens it has been apparent that Rey's training would be a major factor in the Sequel Trilogy; and this has been made quite evident in the new preview. Most of the trailer focuses on Rey's training under Luke Skywalker as the young apprentice is seen focusing on the force and wielding her lightsaber. This has led to many to speculate that Rey's story will take place solely on the planet, Ahch-To, which would be an interesting move on the movie's part. While this direction is similar to Luke's tale in The Empire Strikes Back, this direction has possibilities by giving the movie a unique perspective on a Jedi's training as well as seeing how the teachings of Luke Skywalker differs from other masters. Yet it is hard to believe that aspect will end up being so narrow. While I believe Rey's training will be a major factor in the story I have hard time seeing her adventure in the upcoming film taking place only on the remote planet. The movie has a lot of ground to cover so it would be difficult for things to come into fruition if Rey is on the sidelines. Rey's training will play a big part in the film, but I think that her teachings could be expanded during her journey throughout the galaxy. 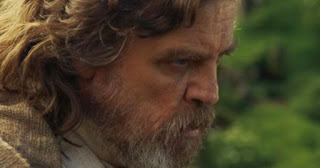 The Character of Luke Skywalker
Luke Skywalker was practically out of the picture throughout The Force Awakens. So it was no surprise that The Last Jedi's first trailer would feature the iconic Jedi Knight in some capacity, and the preview did just that as Luke is prevalent throughout the entire teaser. While the preview does not go much into his character, just hearing Luke speak in the trailer gives enough of an idea of how he has developed over the years. The once rookie Jedi Knight now sounds like a seasoned master who has gained a distinct understanding of the force. Yet despite his skill it also sounds like Luke is a man who has lost his way. This is a direction that has been longed discussed for the character and I think it is an appropriate move for both the movie and Luke Skywalker himself. After losing his Jedi Order it is likely that Luke was left broken from the ordeal and decided to go into exile. I think it is likely that Luke's direction in the upcoming movie will be his conflict and motivation to return to the galaxy which will come in the form of teaching Rey. The direction of Luke Skywalker will be interesting to see Episode VIII, and I can only hope the development for the iconic hero will make for a compelling story in the upcoming adventure.

Kylo Ren's Development
While the story of Rey will be important for the film so too is the tale of Kylo Ren. There is not​ much of Kylo in the preview as his appearance consist of his broken mask and a close up of him wielding his lightsaber. Even with his two scene, the impact of Kylo Ren in this teaser was very much vital as it created a distinct speculation on Kylo's direction for The Last Jedi. In the climax of The Force Awakens Supreme Leader Smoke states that he would complete Kylo Ren's training. Perhaps this training will encompass Kylo's direction in Episode VIII. This move would make sense if the movie is going to have Rey training throughout the movie. Having Kylo learning more about the dark side  would make for a good contrast/comparison between him and his rival and it could work work a good buildup for the two's inevitable duel. An interesting factor coming out of this trailer is seeing Kylo Ren's mask broken. This details may signify a change in Kylo which could lead to a kind of transformation in both his appearance and his character. It is own way the trailer minimal scenes of the Dark Jedi could only mean that big things are awaiting Kylo Ren's in the Last Jedi; which only makes the antagonist's story that more engaging to see. 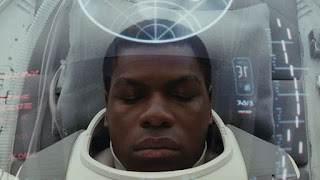 Finn
Similar to  Kylo Ren, another character missing from this trailer is Finn. The character was severely injured during his fight with Ren which he is clearly recovery from that fight as his only scene in the preview features​ the former stormtrooper healing from the battle. Yet this does beg the question: what will Finn's direction be in Episode VIII? There has been talk that Finn will go undercover and infiltrate the First Order, but these details have yet to be revealed. Finn does feel like the odd man out as it is hard to gauge just where the character will go in Sequel Trilogy. However these unknown details does make Finn's development all the more interesting. There are number of possible​ directions​ that Finn could go in, such as him becoming a leader in the Resistance, and each could make for an engaging element for both the film and the character. Whatever role Finn will play in The Last Jedi it seems as though it will be a crucial one as the trailer went out of its way to remain quiet about the character's direction.

Battles Ahead
One of the more prominent parts of the new trailer were the major battle sequences. The teaser featured massive battles between The Resistance and The First Order with​ one of the fights taking place over the Resistance's Headquarters(at least that is what it looked like). This was a factor that was needed for the trailer and one that is appropriate for the upcoming movie. While The Force Awakens had its moments the battle between these two forces was minimal. Having massive battle sequences in Episode VIII gives the film a defining moment that will hold true to Star Wars' more prominent aspects. How these moments will play out remains to be seen but it is good to know that the battles in The Last Jedi will up the stakes between The Resistance and The First Order. 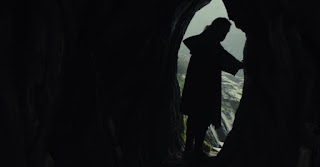 The End of the Jedi?
The preview comes to a close with Luke Skywalker stating that the Jedi must come to an end. This was certainly a bold statement made by the iconic hero, but what does Luke mean by this? Some have speculated​ that this means that Luke wants to create a new kind of order with Rey being the first of these Force Wielders. Then again this could just be Luke speaking out of despair and Rey will invoke a new hope (no pun intended) into the veteran hero that revitalize his role in the Jedi Order. I believe it is the latter. I think Rey will help Luke find the purpose of the Jedi, but it will lead to Luke establishing a new path in how the Order will be instructed. The motif of "The Last Jedi" will have a significant meaning for both the movie and the franchise, but the end of Jedi may a bit of an exaggeration as this could be just a major change for the Guardians of Peace.

Even being just two minutes and two seconds, the teaser for Star Wars: The Last Jedi managed to accomplish a great deal. The moments in the preview not only showcased captivating sequences but it created the right amount of speculation that will have fans and moviegoers pandering for months. Only time will tell just how strong this chapter in the Star Wars Saga will be but, if this preview is any indication then we can expect a powerful adventure from The Last Jedi.

Star Wars: The Last Jedi hits theaters on December 15th.
Posted by Something Cinematic at 10:39 AM