Guardians of the Galaxy Vol.2 Review: A Hard Rocking Sequel For Marvel Studios 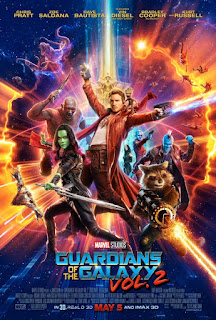 It is the start of the summer which can only mean that things kick off with another superhero blockbuster, and who better to start the season then with the Guardians of the Galaxy? What was a wild card for Marvel Studios became one of the most successful superhero movies of all time as the 2014 film received a massive amount of success. Now the intergalactic team is back in Guardians of the Galaxy Vol.2. Once again directed by James Gunn this 2017 sequel continues the Guardians' adventure in a way that Marvel knows best. With the first film being such a success it is no surprise that this new film has had a lot to live up to. So does this sequel blast off as another success for Marvel, or are the Guardians just a one hit wonder?

Guardians of the Galaxy Vol.2 once again centers on the team of Peter Quill/Star-Lord (Chris Pratt), Gamora (Zoe Saldana), Drax (Dave Bautista), Rocket (Bradley Cooper) and Groot (Vin Diesel). After a mission goes south the Guardians encounter a man named Ego (Kurt Russell) who turns out to be Peter's father. Ego takes Peter, Gamora and Drax to his planet where he hopes to reconnect with his son. However things are not as they appear to be which leads to the the Guardians dealing with a galaxy scale conflict; not to mention deal with problems such as the vengeful high priestess Ayesha (Elizabeth Debecki), Yondu (Michael Rooker) and his Ravangers and Gamora's sister Nebula (Karen Gillan).

The plot to Guardians of the Galaxy Vol.2 was one that was bold but expected. Rather than being an ongoing journey the film's story was grounded in both its themes and its sense of adventure; which help to differentiate itself from its predecessor. Yet the story's structure could feel muddle in places. This was apparent in the decision to split the plot into two areas; with Peter, Gamora and Drax dealing with Ego while Rocket and Groot dealt with the Ravengers. This decision was a sensible one as it allowed the plot to expand upon certain details. However the pacing could feel sporadic in places and it showed that,in hindsight, there was not much to the overall story. Aside from the matter of structure the plot to this sequel culminated well as the story's climax brought things together in an exciting and stylish fashion. 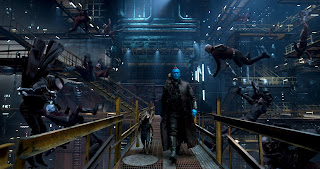 One of the most impressive elements from the first film was the principal cast. Not only were the Guardians interesting individuals but the five had great chemistry together which made for an interesting ensemble. It was pleasing to see that this factor did not  go astray in Guardians of the Galaxy Vol.2. The Guardians continue to be a stellar group of characters and their chemistry has only gotten better. This was apparent in elements such as the relationship between Peter and Gamora as well as the confrontations between Star-Lord and Rocket. Just as impressive as the Guardians were the returning Yondu and Nebula. Both characters received development that made both sensible as well as engaging,particularly Yondu, and the chemistry with the Guardians made for some enjoyable scenes. The new characters were also a highlight for the cast. While characters such as Ayesha could be underwhelming, others like Mantis (Pom Klementieff) was a delightful addition to the Guardians' cast. Cementing the group was none other than Kurt Russell as Ego. Russell's performance not only brought a sense of charm to the cosmic character, but it created one of the most captivating villains in the Marvel Cinematic Universe. Putting the icing on the cake for this intergalactic ensemble was the appearance from Sylvester Stallone as the high ranking ravager, Stakar Ogord. who managed to bring an interesting (albeit brief) dimension to the superhero sequel. 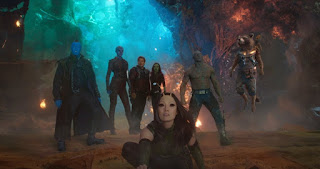 When it comes to the MCU, it is not surprising for their films to have a sense of humor; and Guardians of the Galaxy is no exception this rule. The comedic tone in the first film was one of its highlight as the humor worked well with the film's direction and style. So it was no surprise to see Guardians of the Galaxy Vol.2 keeping true to one its predecessor's biggest factors, but I do think that this sequel could push this element little too much. The movie had some hilarious moments, such as Groot trying to get Yondu's fin, but there were times where the film would go too far with its jokes which ended up hurting the execution to the comedy. When it came to elements such as action and spectacle both were effective but they lacked in having a lasting impression; though that is not to say that neither could be creative nor entertaining. Bringing the technical aspects together was none other than the film's soundtrack. Along with the score by Tyler Bates the movie's pop songs was just as effective as the numbers in first film as each song established the right mood for this cosmic blockbuster.

The best way to describe Guardians of the Galaxy Vol.2 is that if "it ain't broke don't fix it". This is not to say that everything was perfect for this intergalactic sequel as its overzealous direction lead to inconsistent execution in elements such as story and comedy. However thanks to its strong cast of character and its keen sense of style, this sequel managed to be a fitting continuation for the Guardians of the Galaxy as well as a stellar entry in the Marvel Cinematic Universe.

Posted by Something Cinematic at 3:52 PM