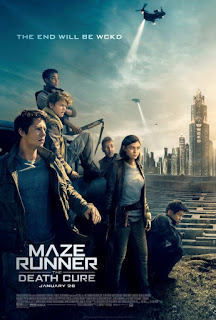 In a time where young adult novels were being adapted left and right for the silver screen, one series turned out to be a sleeper hit; and that film was none other than The Maze Runner. The novel by James Dashner hit the big screen in 2014 and was able to find success in the box office. Thanks to Maze Runner’s financial performance the next book, The Scorch Trials, would find its way to theaters the following year. Just like its predecessor The Scorch Trials would be a hit in box office; which meant that Fox could move forward with the final installment in the series: Maze Runner The Death Cure. Once again directed by Wes Ball, The Death Cure was intended to be released last year but due to Dylan O’Brien sustaining injuries on set the film was postponed to 2018 and has now made its way to theaters. The Maze Runner series has surprised me. I have not read the book series so I cannot say how accurate the films are to their source. Regardless of this point the past two films have managed to be solid blockbusters that were filled with surprises and character. Suffice to say Maze Runner: The Death Cure had much to lived up too, and it did not disappoint.

Taking place after the events of The Scorch Trials, The Death Cure sees Thomas (Dylan O’Brien) and the other Gladers travel to the last city standing in order to save their friend Minho (Ki Hong Lee) from the clutches of WCKD. The direction in The Death Cure’s story was all too expected, but that did not stop this finale from being effective. From beginning to end the story was a non stop thrill ride as the Gladers’ journey into the city was nothing short of exciting. However this was not to say that the plot did not take its time to catch its breath. This was evident in Teresa’s (Kaya Scodelario) side of the story as her conflict allowed the plot expand on the gravity of the situation. In its own way the plot was able to blend the trilogy’s previous aspects which allowed these elements to come full circle. The only thing holding the story back was that some questions were not fully answered and certain plot points relied a little too much on conveniences. Despite this the plot of Death Cure still worked as its presentation and conclusion brought the story of the Gladers to a satisfying end. 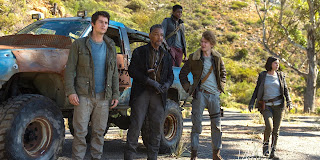 One thing that I have found so impressive with The Maze Runner was its cast. Normally a movie like this would downplay some characters for the sake of a few, but that has not been the case as just about every character in these movies has been either memorable or relevant. So it was good to see that this attribute was not forgotten in The Death Cure. The cast was a solid ensemble that allowed every character to stand out in some manner. As Dylan O’Brien made for a strong protagonist the other Gladers were just as compelling with the likes of Newt (Thomas Brodie-Sangster) and Minho being characters that I could easily get behind. Teresa‘s direction, while not shocking, was efficient her motivation and development gave her outlandish features-especially when comparing her to other leads in this genre. The villains could have used more development but they still managed to be effective; particularly Aidan Gillen as the determined WCKD agent Janson. The  new additions to the cast was a mixed bag as the likes of Walton Goggins as Lawrence (while interesting) could have had a bigger presence; but then again the return of Will Poulter as Gallly definitely helped to round out the cast.

To top things off for The Death Cure were elements such as the action. The Maze Runner has had a good sense of action to it and the third film was no exception. The action-packed sequences were filled with keen direction in both effects and stunts; and this gave the likes of the opening scene the right execution to have me on the edge of my seat. Helping the likes of action was the score by John Paesano. The music did its job to enhance the movie’s bigger moments as well as give the movie (and the franchise) themes that were memorable. Cementing the technical aspects was the likes of the sets and the cinematography. Although the cinematography provided no top notched techniques, it still worked in the movie’s favor by complementing the the film’s locations which only expanded more on the post apocalyptic world of the Maze Runner.

If anything else can be said it is that Maze Runner: The Death Cure was a distinct finale. Although its direction could have been stronger in certain areas the movie featured a well crafted presentation that allowed this installment to be an exciting time at the movies. From story to technical elements The Death Cure was a thrilling adventure through and through as it gave this trilogy a fitting and strong conclusion-not to mention making it a solid blockbuster for the year.

Posted by Something Cinematic at 3:45 PM