Mary and the Witch's Flower Review: A Worthy Successor to Studio Ghibli! 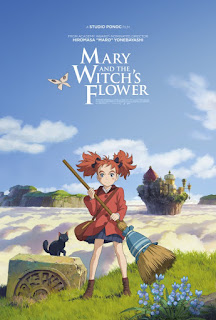 The name Studio Ghibli has become an intricate one in the world of animation. The Japanese film studio has found success across the world with movies such as My Neighbor Totoro, Princess Mononoke, Spirited Away. Howl’s Moving Castle and more. Since the studio’s co-creator and famed filmmaker, Hayao Miyazaki, retired a few years ago it seemed that moviegoers had seen the last Studio Ghibli. However that studio’s spirit lives on in the newly formed company Studio Ponoc. This new studio is made up of former animators and filmmakers from Ghibli as they seek to create the next generation of animated features. The studio’s first endeavor throws viewers right into a world of magic with the movie Mary and the Witch's Flower. Directed by Hiromasa Yonebayashi this animated film is based off the story “The Little Broomstick” by Mary Stewart. The film was released in Japan last July but the movie found its to American screens for a one night only presentation. I had the chance to attend the special presentation and I must say Mary and the Witch’s Flower certainly feels like a Studio Ghibli film.

The film centers on Mary: a young girl who is having trouble fitting in her new home. However when Mary discovers a mysterious flower in the woods, her life is turned upside down when the flower grants Mary the ability to use magic which leads her to find a magical school full of witches and warlocks. The plot of Mary and the Witch’s Flower was effective as the tale was a fantasy adventure through and through. The one aspect that I found so fascinating was the world that the story created. The concept of magic and science was unique as it was an element that made me eager to see more. The plot had few surprises to it as many of the plot points felt too simplistic. Yet it was how the story played out that made the difference as the narrative could be unexpecting in particular areas. One thing that work against the plot it was its pacing. Though the story’s fast moving narrative made for a thrilling adventure, it did prevent the plot from allowing details to flourish. All things considering the plot of Mary and the Witch’s Flower had me wanting to see more, and that was as much of a benefit as it was a hindrance for the film. 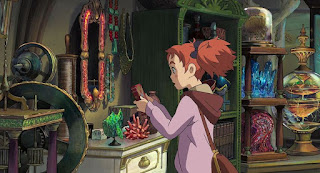 The cast to the film was a small one, but one that I certainly worked. Mary was an enjoyable protagonist whose direction and development, while typical, made the young heroine a character I could get behind. The supporting cast was good as it had plenty of character to it. I particularly liked the school’s groundskeeper, Flanagan, who stole the show every time he was on screen.  However while it had character the supporting cast lacked presence. The cast’s minimal screen time did them no favors as it gave the group an underwhelming sense to the overall film  Performance wise the cast was quite good. Ruby Barnhill was rather energetic as the English voice of Mary. Yet the performances that surprised me the most was Kate Winslet and Jim Broadbent as Madame Mumblechook and Doctor Dee. The portrayal of these two school teachers was not only appropriate but it provided dynamic performances from both Broadbent and Winslet. 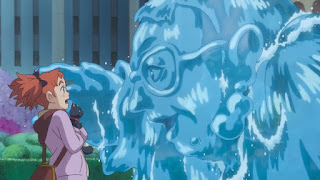 To no surprise the animation of Mary and the Witch’s Flower was a highlight for the movie. The animation featured the fluent colors of Studio Ghibli and a sense of creativity that allowed it to stand out from its predecessors-not to mention its respected genre. Along with the stellar animation was the score composed by Takatsugu Muramatsu. The music featured the right elements to for the movie as it encompassed the adventure and magic behind this animated film. The movie’s main theme in particular was well done as I have found myself humming the tune from time to time. 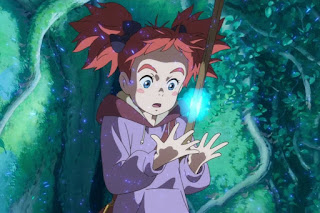 Mary and the Witch’s Flower was, without a doubt, a enlightening animated film. Though it held few surprises in both story and character, the movie made up for its issues by having a strong execution in all of its aspects. Through it sense of fun and adventure, Mary and the Witch’s Flower was a experience that was both simple and compelling; which in my book makes Studio Ponoc’s first movie a worthy successor to the name Studio Ghibli.

Posted by Something Cinematic at 3:51 PM