Wonder Woman Review: A Wonderful Adventure and A Glorious Blockbuster 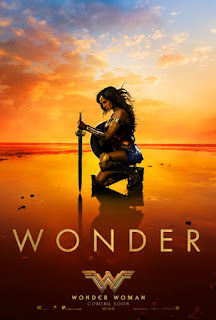 For years moviegoers have been accustom to both Batman and Superman gracing the silver screen. The two icons of DC Comics have had many movies to their names and both have pioneered the foundation of the superhero genre. Yet if you are familiar with DC Comics then you know that along with Batman and Superman another hero forms DC's superpowered Trinity and that character is none other than Wonder Woman. The famed superheroine has been beneficial for DC Comics and has played a pivotal part in pop culture. Yet despite the character's fame Wonder Woman has never had her own movie, but that has finally changed. The character made her cinematic debut in last year's​ Batman v.Superman: Dawn of Justice and now the Amazon Princess her own solo film simply titled Wonder Woman. Directed by Patty Jenkins Wonder Woman is the fourth film in the DC Extended Universe and centers on the character's time during World War One. To say that there is much riding on this movie maybe an understatement as it not only has to bring Wonder Woman's story to the silver screen, but create momentum for the DCEU. So does Wonder Woman do justice for the character, the DCEU and the summer?

The story to Wonder Woman centers on Diana (Gal Gadot): an Amazon Princess eager to find her place on Themyscira bot to mention the world. Things change for Diana when US spy Steve Trevor (Chris Pine) crash lands on the island and tells the Amazons about the "War to end all Wars". Once hearing about a lethal poison created by Doctor Maru (Elena Anaya) and utilized by General Elrich Ludendorf (Danny Huston), Diana believes that the conflict is being created by Ares, the God of War, and decides to travel with Steve to fight in the war-despite her mother's objection.  Along with Steve and his companions Diana travels to the frontlines to bring an end to the conflict and become the hero that she was meant to be.

In this age of superhero films origins stories are a dime in a dozen and its hard for one to stand out from the rest. In the case of Wonder Woman this origin tale was both refreshing and exhilarating. The plot keeps true to the aspect of Wonder Woman's origins all the while having a sense of adventure worthy of any blockbuster. These elements certainly gave the story an atmosphere rich with excitement, but what I found fascinating about the plot was how it could utilize serious themes (such as the casualty of war in its presentation). Not only did the serious themes give a plot a sense of complexity but it managed to work well with the more lighthearted factors to this superpowered plot. Yet the story was not impervious to flaws which was evident in the plot's fast moving pace. While the pace helped to keep things exciting it took away from the plot elements that needed to be established. Another flaw in the story was it handling of plot points as some of the story's twist could be a little too obvious. Even with its flaws this story was effective as it was an adventure that simply made for a refreshing superhero tale. 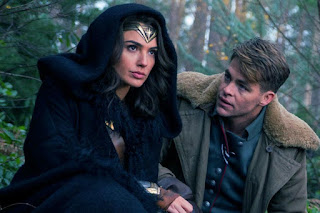 When Gal Gadot was cast as Wonder Woman I remember the hostility towards the decision, but I reserved judgement until I saw the actress in action. Since then Gal Gadot has shown that she was meant to play the iconic superheroine. She proved it in Batman v.Superman and again in Wonder Woman. There were times where Gadot's performance could feel a bit green,but this actually worked by creating the right level of novicehood for the character. Aside from that the characterization of Wonder Woman was sound as her distinct presence was complimented by her over eagerness to save the world. Along with Gadot's strong role was a solid performance from Chris Pine. Pine's take on Steve Trevor was dynamic to say the least as the character's dimensions worked to Pine's strength and gave the actor something new to work with. Together Gadot and Pine had a chemistry that was as engaging as it was fun. Along with the strong leads was a supporting cast that had plenty of character to it; which was prevalent in the likes of Etta Candy (Lucy Davis), Sameer (Said Taghmaoui), Charile (Ewen Bremmer),Chief (Eugene Brave Rock), Sir Patrick Morgan (David Thewlis), Antiope (Robin Wright) and Hippolyta (Connie Nielson).While each of these characters could have used more development, particularly Hippolyta, they still managed to stand out and give the movie a fitting ensemble. When it came to the villains both Danny Huston and Elena Anaya played typical, yet effective, antagonists while Ares was quite efficient as he made for an ominous threat that worked to the movie's presentation.

Say what you will but if there is one area the DCEU seemed to strive in it would be action-and Wonder Woman continues this trend. Blending practicality with spectacle the film's action as definitive as it was creative. I did feel the use of slow motion shot could be a little excessive, but this direction did work to the movie's benefit as it did enhance the action's intensity. Elements such as effects and cinematography ranged from good to great as both managed to fit into the tone behind the movie. Along with the action and the other technical elements was the score by Rupert Gregson-Williams. The score managed to work perfectly with the movie's adventurous direction as it could be both energetic and uplifting; not to mention the soundtrack was able to blend Wonder Woman's theme from Batman v.Superman into​the score which only added to movie's benefits.

Wonder Woman was a refreshing superhero film to say the least. The movie managed tell the story of Wonder Woman in a way that was both thought provoking and exciting. With its sense of adventure, strong leads and dynamic action, Wonder Woman was an enticing blockbuster that did justice to the character, the DCEU and the summer season.

Posted by Something Cinematic at 7:21 PM