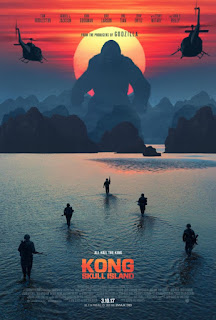 There are many characters that have shaped pop culture but few are as big as King Kong. Since 1933 the Eighth Wonder of the World has helped to define the world of cinema in many ways; whether it be his various appearances or just the inspiration that he has had on filmmakers and movies. It has been many years since audiences have seen this colossal ape, but now this icon has made his return to silver screen in Kong:Skull Island. Directed by Jordan Vogt-Roberts, Kong: Skull Island not only revitalizes the tale of King Kong but it also places the ape in the Monsterverse: a cinematic universe that homes other giant monsters including a certain lizard  The concepts behind this monster movie certainly has potential to bring something new to the franchise, but is Kong:Skull Island a new start for the icon or will it be ambition that kills the beast?

The movie takes place in the 70's as William Randa (John Goodman) seeks to explore an uncharted area called Skull Island. To pull off this expedition Randa forms a team which consist of Colonel Preston Packard (Samuel L. Jackson) as well as his men, tracker James Conrad (Tom Hiddleston) and photojournalist Mason Weaver (Brie Larson). Together the group make their way to Skull Island, but upon their arrival they encounter a massive gorilla named Kong. After the expedition is destroyed, the team is separated as Packard leads his men to kill the ape and Conrad's group discovers more about the island. Upon discovering the islanders Conrad and Weaver meet Hank Marlow (John C.Reilly): a World War 2 fighter pilot who has been stranded on the island for 28 years; and that is when the group finds out that there are greater threats on Skull Island.

The story to King Kong has always been the fairly simple: man goes to an island filled with giant creatures and just so happens to meet a massive ape. Granted there tends to be a deeper moral to it but the story behind the series has always been fairly simple-and it is in that simplicity that makes King Kong effective. I wish I could say the same things about the story to Kong: Skull Island. There is a simple nature behind the plot as well as good concepts, but what holds the story back from being effective is its structure and pacing. The structure is beyond sporadic as it jumps from one place to another and give his little to no time to grasp the story's reasoning. Meanwhile the movie's fast pace, while understandable, prevents moments like Kong's reveal from being memorable. This is not to say that everything about Skull Island's story was bad as it featured an intriguing lore which I thought brought new concepts Kong, Skull Island and the franchise as a whole. Along with the captivating backstory was the movies sense of adventure. Although it could be rushed the story was exciting as watching the characters fight their way through Skull Island made for a thrilling time. I believe that there is a good story behind this reboot but I feel that the sense of direction held  this plot back from being truly tremendous.

The movie certainly had a cast full of character. I was quite surprised to see that rather than centering on the likes of Tom Hiddleston or Brie Larson, the movie went for a full ensemble with every character being relevant. However, just like the story, the movie's sporadic direction prevented the cast from being truly remarkable. While leads such as Tom Hiddleston, Brie Larson and John Goodman do the best that they can with their performances, their characters had little to no direction. Take John Goodman as William Randa for example. His motives were clear at the beginning, but his change of heart had little development to it and just came out of nowhere. The only lead who made any sense was Samuel L Jackson's Colonel Packard as his development was understandable from beginning middle and end. Thankfully the supporting cast helped smooth out this factor greatly-if only a little. While some characters were just there to fill up space,others such as the soldiers were quite investing. This was prevalent in John C. Reilly's Hank Marlow as he was the most engaging character among the ensemble. Then there was Kong whom was both intimidating and compelling. To put it simply: Kong was Kong. 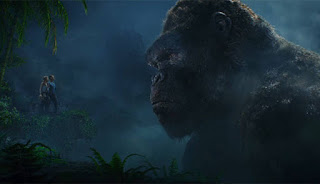 Given that this was a big monster movie it was no surprise that Kong: Skull Island would be filled with major effects, but I could not help but feel  that this element was inconsistent. On one hand the film featured beautiful visuals that meshed effects and cinematography fluently, but then it would have cg sequences that were mediocre at best. Thankfully the film's design was not harmed by this inconsistency. The design in the film's monsters were creative as it brought something unique to this movie's world. I was also surprised at how refreshing the look of Kong was as it blended the creature's various designs over the years. The film's score by Henry Jackman seemed fitting for the film's theme, but the adventurous compositions had a hard time standing out no thanks to the movie's excessive need to play hit songs.

Kong: Skull Island was by no means the titanic blockbuster that it could have been. Due to its sporadic execution in storytelling, character development and technical direction, this monster film was lacking in its presentation. Yet despite its flaws Skull Island had its share of merits as its sense of adventure, intriguing lore and decent performances allowed the film to be entertaining. If nothing else Kong:Skull Island was a different way to reboot the series that, although far from perfect, makes me intrigued to see what the future entails for King Kong.

Posted by Something Cinematic at 1:48 PM