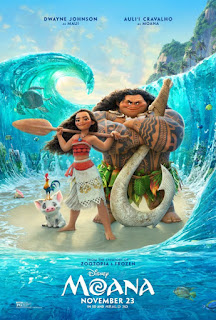 Disney has been on a roll when it comes to their animated features. Since 2010 Walt Disney Animations Studios has had hit after hit as movies like Tangled, Wreck-It Ralph and Frozen have become new names to carry the title of Disney. This year has already seen one Disney animated feature with Zootopia, but it would not be the last as in theaters this holiday season is Moana. Directed by the team of John Musker and Ron Clements, Moana centers itself on the ancient legends of Maui. Seeing early content on Moana made the film look like a big time adventure, and the trailers for the movie only further this point; but can this holiday blockbuster continue momentum for Disney or does animated feature get lost at sea?

The film centers on Moana (Auil’i Cravalho): a young girl from the Motunui Island. All her life, as she is raised to be the next chieftain of her tribe, Moana constantly thinks about journeying the seas. However when a darkness begins to plague the Motunui Island Moana discovers the cause of it to be a 1000 year curse when the Heart of Te Fiti was stolen by the demigod Maui (Dwayne “The Rock” Johnson). To save her island Moana travels the seas to find Maui so he can help her put the Heart of Te Fiti back in its rightful place. After a harsh meeting, Maui reluctantly helps Moana on her mission as they travel the ocean to restore peace to the world.

There was definitely a sense of adventure to the story of Moana. The plot’s concept and direction was compelling and it made this tale on the high seas was quite captivating-not to mention entertaining. Yet there were times where the plot would go adrift and this was due to the Moana’s pacing. It was not unexpected for the story to be a fast moving one, but this did prevent the story to truly flourish in its ideas. Plot point such as Moana and Maui bonding felt rushed and this sense of narrative lead to pivotal moments feeling rather minor in the overall presentation.. The story also had its fair share of traits seen in previous Disney movies; which turned out to be a double edged sword for the 2016 feature. On one hand the use of similar plot points held the story back, but the plot’s presentation was unique enough to have this Disney movie differentiate itself from its predecessors. 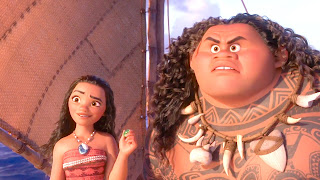 With a movie such as this one it made sense that Moana’s presentation to depend on its two lead characters; and fortunately the two protagonist did not disappoint. Moana had some direction typical of most Disney Princesses such as longing for more; but there was a sense of strength to the character and the performance from Auili’i Cravalho made the heroine a convincing one. Then there was Maui. as much as I liked the demigod of the wind and sea, Maui lacked the development he needed to make him a fleshed out character. Yet if there was one thing that work in Maui’s favor it was the charismatic performance from Dwayne Johnson. The Rock’s role more than made up for any shortcomings as he gave the fallen hero the perfect sense of energy for a character such as Maui-all the while having terrific chemistry with Cravalho’s Moana. Along with the two leads was a supporting that was filled with a variety of characters. The cast had its share of intriguing supporting characters such as Moana’s father Tui Waialiki (Temuera Morrison), Gramma Tala (Rachel House),the massive crab known as Tamatoa (Jemaine Clement) and the Maui’s tattoo self whom stole in all of his scenes. However while there several good supporting characters, others seemed to get lost in the thick of thing. Why the chicken Hei Hei (Alan Tudyk) played a part in this picture I will never know. 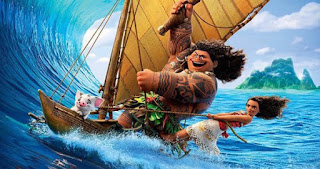 There were two things that made up the technical elements of Moana: animation and music. The animation to the film certainly fit within its concept by featuring vibrant colors and having array of styles  which helped to bring the movie’s sense of magic to life. Along with the colorful animation was the music. While having an adventurous score the movie also featured several musical numbers.The songs managed to worked within the context of the film, and most of the numbers were catchy to say the least. The best songs included Moana’s“How Far I’ll Go”, Maui’s “You’re Welcome” and the number “We Know the Way”-which is sung by Moana’s ancestors.

While it does goes adrift at times, Moana manages to sail to success. There were certainly bumps in its executions which was notable in the story’s progression and character development. Yet with its strong leads, adventurous themes and great music, Moana manages to find its own voice within the vast sea that is Disney. It may not be flawless but Moana does just enough to continue momentum in this new Disney Renaissance as well as being a delightful film to see this holiday season.

Posted by Something Cinematic at 4:11 PM