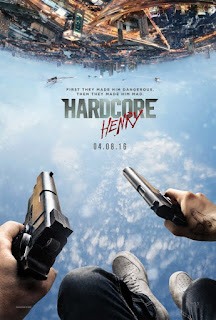 In my adventures as a reviewer, I have seen a variety of movies. I have seen that movies can be massive blockbusters, simplistic popcorn flicks or independent works of art. Yet there comes a time where a movie tries to do something unique. In this case I refer to the the new sci-fi action movie: Hardcore Henry. Directed by Ilya Naishuller, Hardcore Henry is the first of its kind as it was not only filmed with a GoPro camera, but the film is in fact an action movie that is in the first person perspective. Watching the preview was enough to grab my attention as the film looked both ambitious and creative. So is Hardcore Henry a one of kind action film or is this flick too ambitious for its own good?

The action film follows the silent protagonist Henry; whom awakes to discover that his body is all prosthetic. Getting aid from his wife Estelle (Haley Bennett), Henry's life is quickly turned upside when the evil Akan (Danila Kozlovsky) captures Estelle and sends his goons to hunt down Henry. With the aid of the lucrative Jimmy (Sharlto Copley), Henry fights back against the notorious organization and sets off to stop Akan as well as save his wife. 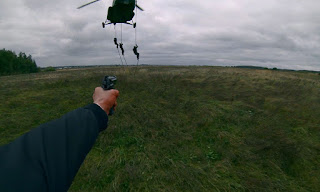 I was not expecting much from Hardcore Henry when it came to a plot as I assumed that the story would be dictated by the movie's concept. For the most part that notion was correct as the plot to Hardcore Henry was fairly simplistic. Throwing you right into the thick of things, this plot was a roller coaster of action kept as its fast pace made the story an exciting experience. While the plot was simple enough to enjoy, there was this notion that Hardcore Henry was trying to have a complex delivery in its tale. While I commend the filmmakers for trying to give this film an intriguing plot, I felt that the execution of the likes of plot twists were a bit ineffective. This was due to the story's fast pace. The quick moving structure to the film prevented the plot points from being effective as there was little time to grasp the gravity of each twist. This issue was definitely prominent in the film's rushed, yet satisfying, final act as it threw a lot of things to round out the story- the but points had little to no impact.  While its execution was underwhelming, the plot's concept was very much effective in its delivery; and that did count for something. 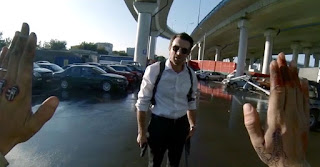 Given the idea of the hero being in a first person perspective, it was hard to count Henry as a  normal character. Yet while Henry was a silent protagonist, there was something about the character that made him likable. Perhaps it the close experience I and audience shared with Henry that made him effective, but something certainly made this silent hero an enjoyable character. The cast member who should be commended was Sharlto Copley as Jimmy. Jimmy was a character with personality. This point was shown off in a unique way  as the character had many versions of himself. Sharlto Copley showed his range as an actor by making Jimmy's personas unique individuals that were fun additions to the cast.  Akan on the other hand was not the most complex of villains as his motivations were fairly blunt. However the performance Danila Kozlovsky made this antagonist enjoyable as I could not help but love to hate this antagonist. The rest of the cast was a bit underwhelming but they managed to work to the movie's benefit. The supporting characters had questionable relevance, but there was no denying that stood out one way or another. 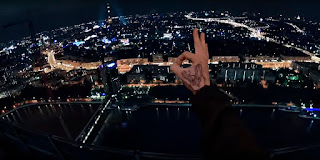 Given that this was a first person action movie, there was no denying that Hardcore Henry had a unique sense of technical elements. The action to the movie was exciting as it was gory. Granted the film's action sequences could be daunting to watch- but given the concept behind the movie, this direction did make sense. The cinematography was masterfully done as the likes of practical and cg effects blended perfectly together; while the editing was fluent to capture the movie's impressive sequences. If there was one issue I had with this section of the film it was the use of general aspects such as having subtitles and music. This is not to say that these factors were handled the poorly-in fact they were just fine (especially the film's soundtrack). Yet given that this was a movie about seeing the first person perspective of a character, it was a bit confusing why Henry was seeing subtitles and hearing music.

Hardcore Henry was not your average action movie. The movie's unique concept and creative direction certainly lived up to its expectations. However the film is not without its issues as its ambitious nature did hurt the effectiveness of the likes of story and characters. Yet even with its issues Hardcore Henry was a one of kind cinematic experience that pushed the boundaries of action; as well as filmmaking.

Posted by Something Cinematic at 6:00 PM