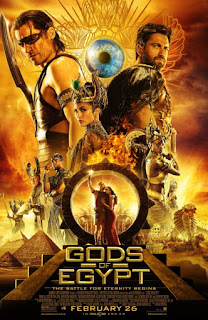 The cinematic world is no stranger to the concepts of mythology and ancient gods. This idea of these legends have grace the silver screen in a variety of films; from Clash of the Titans to even Marvel's Thor. Yet there is one set of gods that rarely make a cinematic appearance and that would be the one of Egyptian Mythology. There have been movies that reference this ideology but the fact remains that Ancient Egypt barely gets depicted in a celluloid format. Yet this is no longer the case as this mythology gets represented in the new action-adventure blockbuster: Gods of Egypt. Directed by the man behind The Crow, Alex Proyas, Gods of Egypt brings these legends to life in a very eccentric fashion. By viewing the trailer this fantasy film looked engaging, but does Gods of Egypt truly bring the legend to life?

Gods of Egypt follows the story of Horris (Nikolaj Coster-Waldau): the god of the air. Before Horris can become King of Egypt, the spiteful god Set (Gerard Butler) takes the throne by force. With his eye taken from him, Horris becomes an exile as Egypt falls under Set's rule. However fortune comes the god when a thief named Bek (Brenton Thwaites) reclaims of Horris' eyes. In order to save Egypt, and save Bek's beloved Zaya (Courtney Eaton) from death, the two unlikely heroes set off on a grand adventure to stop Set once and for all. 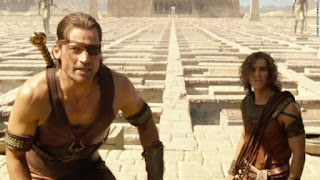 The plot behind this blockbuster certainly looked entertaining, but in the end the godly tale was fairly standard. Gods of Egypt's plot plays to many trope in this kind of films; such as the Horris' tale of redemption This is not to say that this factor was ineffective. While the plot has many conveniences to it, it did manage to take the time explain itself; and while it storytelling may not have inventive, the adventurous concept to the movie were quite engaging. So though this blockbuster's plot is a bit underwhelming, it is by no means boring. 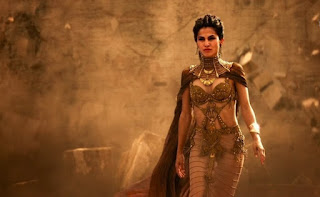 The cast behind this adventure film was quite coherent. When it came to characterization the cast was a bit hit and miss. The film's heroes had fairly generic direction; with Horris trying to take back the throne and Bek reclaiming his one true love. Yet despite their generic direction both characters made for enjoyable leads, and their chemistry together made Horris and Bek a fun duo. The other characters were also engaging. While the likes of Zaya, Hathor (Elodie Yung) and Thoth (Chadwick Boseman) had minimal direction, they made up for this with outlandish delivery. The same could be said about Gerard Butler as Set. The villain had simplistic goals of world domination, but Set turned out to an enjoyable antagonist as his motivations were more complex then they appeared. Rounding out this cast was Geoffrey Rush as Ra- whom I found to be delightful. The orderly god of creation had a sense of charm to his nature, and that only complimented the colorful performances that made up this cast. 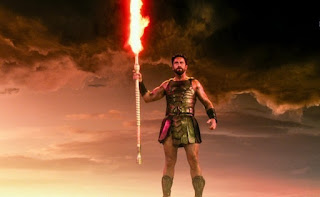 Just by looking at this film one could tell that Gods of Egypt would be a spectacle driven experience, and the blockbuster did not disappoint in this area of filmmaking. The visual effects were definitely something to behold. Concepts such as the gods bleeding gold as well as the size ratio between mortals and immortals were handled in a creative fashion. However this is not to say that the effects were flawless. While nothing was too distracting, I thought that some of the movie's massive sequences could have been more effective if handled differently. This issue was also seen in the movie's action scenes. The film does have a good sense of action as many sequences were truly enticing; but I thought some moments, such as Horris vs. Set, could have had more grandeur to them. The score by Marco Beltrami was fitting for this blockbuster as it was thematic to both the Egypt motif and the adventure that made this fantasy blockbuster.

Gods of Egypt was not the most impressive of its kind. Yet that did not make the movie any less enjoyable. True there was nothing divine in matter of storytelling or character development, but both of these factors were enlightening due to the movie's execution. If anything Gods of Egypt is a fun popcorn film with a spark of creativity to it; and that is a good enough experience for this Film Adventurer.