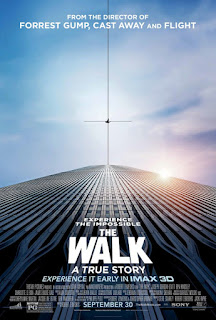 The name Robert Zemeckis is cemented into the world of movies. The claimed filmmaker has taken moviegoers through time with the adventure series Back to the Future, blended animation with live action with Who Framed Roger Rabbit and made Oscar worthy films with Forrest Gump as well as Cast Away. Now the director takes viewers to new heights with the new biographical blockbuster: The Walk. Based on the novel “Reach the Clouds”, The Walk captures the true story of performer Philippe Petit (whom also wrote the book) and how he tightrope on the world trade center in 1974. Not only was this movie meant to capture the true events of Philippe Petit, but the film also intended to be dedication to the tragedy of September 11th. So being advertised as the “3D Experience of the Year” is The Walk another hit for Zemeckis, or does this biographical film slip on its own wire?

The film captures the story of Philippe Petit (Joesph Gordon-Levitt) and his dream to hang his wire on the newly constructed Twin Towers and walk on it. With the help of his girlfriend Annie (Charlotte Le Bon), his mentor Papa Rudy (Ben Kingsley) and other associates, Philippe puts his plan into motion and heads to New York so he can preform the greatest stunt the world has ever seen. However pulling off this act was easier said then done. 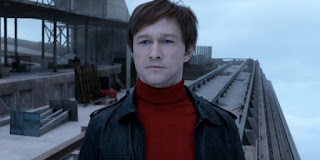 The plot to The Walk presented an intriguing tale. The story did not capture the full life of Philippe but  instead focused on Philippe's famous walk; though we do see Philippe get his started as a performer. My concern about this concept was that it would make the story too narrow, however The Walk's straightforward storytelling was a good direction for the plot. The story worked much like one that you would see in a heist film as Philippe and his crew set off to make this tightrope walk a reality. The heist concept to the film gave the film a sense of uniqueness. What also helped the plot was matter of how it was told as Philippe was also the narrator to the film. Everything to this story  led to a thrilling climax that, while it may have been a little extensive, was one of the most dynamic that I have seen in quite sometime. 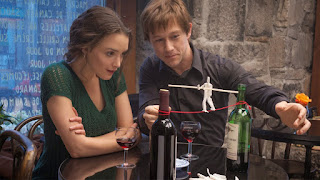 With the movie following Philippe's historical moment, it only made sense that the film centered on the tightrope walker. When it came right down to it, Joseph Gordon-Levitt had a fantastic performance as Philippe. What made this performance so compelling was the two sides of Philippe's character: the protagonist and the narrator. As the lead, Philippe was fairly engaging as you can understand the motivation behind Petit's dream. However what may have been more effective in this characterization was Philippe as the narrator side of the tightrope walker. Philippe made for an charismatic storyteller as he expressed his feelings in a engaging fashion. All in all, this performance allowed Joesph Gordon-Levitt to showcase his sense of variety. The rest of the cast may not have been as memorable as the lead, but they were still good. Charlotte Le Bon had solid chemistry with Gordon-Levitt as Annie; while Ben Kingley made for a strong supporting character. Yet at the end of the day, this cast's merit truly relied on having a strong lead; which in this case was not a bad thing. 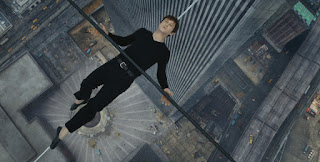 Seeing that this movie was titled as a “3D Experience” one would hope that this factor would deliver; and it certainly did lived up to its hype. The 3D to The Walk was extraordinary as it captured all the necessary dimensions. Along with the good 3D was a great sense in cinematography. The cinematography felt like a blend of various styles. For example: the first act to the film was shot in a way that it felt foreign; which seemed appropriate as it took place in France. Along with the dynamic cinematography was a great score from Alan Silvestri. Though the music featured the signatures of Silvestri's compositions, the score had its own sense of style; from capturing the heist tone to the film to featuring a beautiful piece that embody the prospect of following a dream.

The Walk is something else. In a creative way, this film captures the story of Philippe's walk by using a range of cinematic tones. Along with  Joesph Gordon-Levitt's stellar performance the movie is a remarkable spectacle by using technical elements to the best of their ability. Much to my surprise, The Walk turned out to be a remarkable experience that not only gave Robert Zemeckis another hit film, but it turned out to  be a must see film for 2015.

Posted by Something Cinematic at 7:24 PM