A Walk in the Woods Review: A Intriguing and Engaging Journey 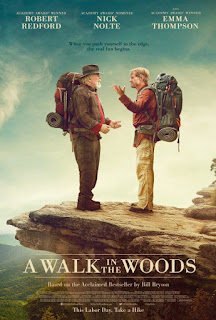 In the world of movies we often see characters go on some kind of journey. These adventures comes in all shapes and forms; whether it is journey on a global scale or something pertaining a inner quest. The latest film to capture this adventurous theme is the new biopic: A Walk in the Woods. Directed by Ken Kwapis, A Walk in the Woods is based on the novel by Bill Bryson and tells the story of how Bryson attempted to walk the Appalachian Trail in its entirety. Biopics are not an easy thing to pull off as you not only have to capture the events of the story, but you need to make it work as a film. So did A Walk in the Woods do Byrson's tale justice, or did this biopic loose its way on the trail?

As stated this film follows the story of Bill Bryson (portrayed by Robert Redford). After attending a funeral, Bill decides to walk the entire Appalachian Trail. After getting an objection by his wife Catherine (Emma Thompson), Bill takes Catherine's advice to find someone to go on the journey with him. The only person crazy enough to go with Bryson is Stephen Katz (portrayed by Nick Nolte): an old friend of Bill's who he has not spoken too in 30 years. With everything set the two make their way through  the Appalachian Trail; and filled with adventure and humor, this journey would be life changing for the two friends. 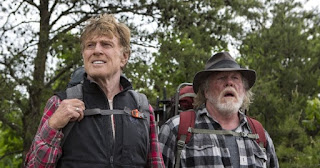 Despite being about the Appalachian Trail, the story of A Walk in the Woods is fairly straightforward. At its core the film's plot is a road trip story. This was not, by any means, a bad thing as this concept did work to the film's advantage. It may not do anything new with this type of story but the road trip scenario does stand out due to it taking place in a unique environment like the Appalachian Trail. The other major factor to this plot is the story of Bryson and Katz. Since this is a journey of two friends, it only made sense for the movie to have a character driven story; and this direction managed to be effective. The other thing to note in A Walk in the Woods' story was its pacing. The pacing to the movie worked both for and against it. On one hand the pacing managed to capture the overall journey; but when it came to individual scenes, there were times when the sequences felt rushed. Certain things would happen on Bryson and Katz's adventure, but before you knew it the matter would be resolved. So while were some issue in the execution, this plot was still effective thanks to it ability to stay true to the ideas behind A Walk in the Woods. 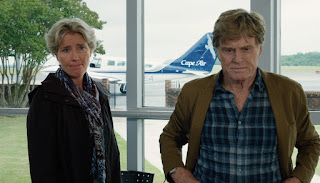 Seeing that the film centers on two characters, it was quite obvious that the cast would depend on the portrayal of Bryson and Katz. Fortunately for the film these two friends definitely drove this factor. This was thanks to the performances of Robert Redford and Nick Nolte. Not only did both actors have stellar performances, but both these veterans had fantastic chemistry together as they captured the concept of two old friends being reacquainted. The supporting cast to A Walk in the Woods was another matter entirely. When it came to Emma Thompson's performance, she definitely did a great job playing Bryson's wife. However the rest of the supporting characters was indeed lacking. Seeing that this a road trip movie, it would make sense for characters to have a limited time on screen. However some of characters in this film had little to no purpose. A good example of this was Mary Steenburgen as Jeannie. While Steenburgen did a fine job, the character of Jeannie had little to no impact on the overall movie; which was quite disconcerting. All I can say is thank goodness that this was a film that needed two major leads to drive it,or else this factor may have been in trouble.

There was not much when it comes to A Walk in the Woods' technical aspects; but then again this is a type of movie that did not require a bombastic feel in this element. The cinematography was fitting for the film as it captured the Appalachian Trail; both in its major locale and in its details. The score by Nathan Larson also worked to the movie's favor. The music captured the idea of a journey and, just like the cinematography, complimented the massive trail. The comedic side to the movie was effective. The element was done in a way where it could be funny but it did not detract from the film's  more dramatic moments. Overall the direction to this film was fitting for its concepts as it created the right tone for a solid dramedy.

At the end of this trail, A Walk in the Woods is indeed a solid film. While it does have some issues in its execution, it more than makes up for its flaws by staying true to its concepts and having two outstanding leads. While the film does nothing new for the idea of road trip movies, this biopic was still a intriguing one as it made for a delightful journey.

Posted by Something Cinematic at 4:38 PM

Email ThisBlogThis!Share to TwitterShare to FacebookShare to Pinterest
Labels: A Walk in the Woods, Movie Review, Nick Nolte, Robert Redford