Matthew McConaughey as The Green Goblin? 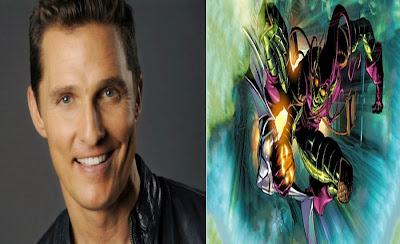 Rumors can be a funny thing sometimes. While it is usually speculation, you cannot help but wonder if there some truth in rumors; particularly when they deal with the Marvel Cinematic Universe . A new rumor on Marvel Studios' Spider-Man caught my attention last night. There are many factors to this reboot that need to be answered; such as who will be playing Spider-Man and will be the film's director? However, the latest rumors has nothing to do with either question as this report has to do with Spider-Man's arch nemesis: The Green Goblin.

Since Spider-Man's debut on the silver screen, the Green Goblin has emerged in some form or way; whether it was Willem Dafoe's interpretation in Sam Raimi's Spider-Man, or Dane Dehaan's take on the Goblin in The Amazing Spider-Man 2. So it only make sense for the Green Goblin to join Spider-Man in the Marvel Cinematic Universe. However according to this new rumor, not only will Norman Osborne be in the upcoming film but the man speculated to play the villain is Matthew McConaughey.

Read the full article on Moviepilot.com
Posted by Something Cinematic at 12:05 PM