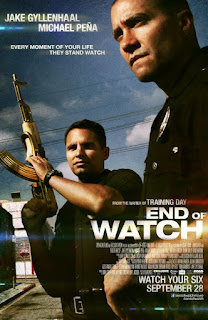 If there is one genre that seems to continually appear in theaters these days it is none other than found footage films.  If you are like me, then you absolutely cannot stand this style of filmmaking. It is not that the style makes for a bad concept, it just that the genre has been done to death and each film seems to follow a similar formula.  Normally this sub genre resides in the land of horror, but every now again you will see this style in another movie format.  This time around we see what it looks like through the footage perspective of a cop drama. See whether or not this style works in this review of “End of Watch”.

The story of “End of Watch” deals with two cop and their daily lives on patrol as they deal with the crimes of Los Angeles. The plot behind this film is just that: the life of a police officer. This major theme is the strongest factor behind the story as throughout the entire runtime, it never seems to be forgotten. The movie knows what it is about and does a great job interpreting a police’s officer’s lifestyle. However, there is one thing that does drag down this cop story and that would be major plot points. It is not that each point was bad, but they do get underplayed and really do not have that major of an impact. Aside from that, the story is rather sold as seeing the perspective of a cop is both compelling and unique.

The two cops in this film are Brian and Mike, played by Jake Gyllenhaal and Michael Pena. As the film starts, you get to know the two characters very quickly; and for most part, they turn out to be really enjoyable. You see that both cops can be childish at times, but when things get serious, they do known how to handle themselves. To top it off, the chemistry between Gyllenhaal and Pena is outstanding, as they manage to bring a very realistic feel to the relationship between two partners. Unfortunately, supporting cast does get left in the dust. I do enjoy the likes of Anna Kendrick, but everyone else seem underdeveloped; which is not to say the performances were bad, I just hoping for a little more.

Now comes the major question: how is the found footage perspective behind the film? To be honest, the camera work of “End of Watch” is a double edge sword. In some points of the film, the footage is really distracting to the point where the film made me feel very nauseous. Not to mention that you might question why everyone in this film seems to have handy cam on their persons at all times, but I think that is just found footage thing. A side from that, this is definitely one the better found footage films out there. The movie is portrayed by several kinds of cameras; from handy cams to security footage; and it seem to fit in the context of the movie. However  what I liked most about the found footage element is that even though it is a major factor, it never forgets that is a movie nor does it forget the subject matter behind this film; which the livelihood of being a cop.

“End of Watch” turns out to be a very unique cop movie; but that is not to say the film does not have its issues.  Both story and characters fall under the issue of development; yet they do make up for it by telling a story of two cops and how their relationship seems to be based in realism. Though I do have my issues with this film, I do think “End of Watch” is worth it; as it is not only a unique found footage film, but in fact a very solid movie.

Posted by Something Cinematic at 12:26 PM