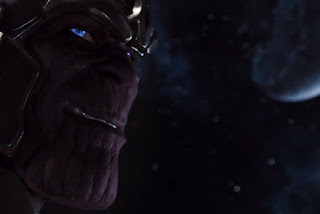 As most know, Marvel's major baddie, Thanos, was featured in The Avengers. Though the reveals had many in awe in the theaters, some people in the audience may not know who this villain is. Fortunately, producer  Kevin Feige got a chance to sit down with MTV to talk about the character and direction this galactic titan and we can expect from that character in the next phases from Marvel Studios:

"Clearly, there's a purpose to us putting him in the end of that movie. We do have plans for him," said Feige. "I wouldn't say we ever feel the need to rush anything one way or the other. We succeeded in Phase One because we stuck to our guns and stuck to the plan. That plan took place over many, many years and it ultimately paid off. I see Phase Two unfolding in the same way of us taking our time, us doing what's right for each individual movie, while folding in elements that will not only build up to the culmination of Phase Two, but even Phase Three."

The interview continues talking about recasting Thanos and how the Mad Titan's coming to the silver screen has really brought the villain into perspective.

"I think we feel pretty free to recast. That was cast for literally that one shot. Depending on what the role requires from future movies, we'll go from there." "Suddenly, you have a million people who had never heard of an Infinity Gauntlet or a Mad Titan learning those terms. I love that. I love when the experience goes beyond the movie theater and encourages people to look deeper into our universe."


Now I for one got my introduction of Thanos from the likes of the Marvel fighting games and work my way from there. I for one could never have believed that this character would ever be on the big screen, but I've been wrong before. Now that the secret is out, the next step is to see where this character will go. Since we are dealing with the Thanos, I assume next time we see the Avengers together, they will not only be have deal with the Mad Titan, but  the Infinity Gauntlet will be involved. Though the film will no doubt differ the source material, I am curious to see how the next phase will play out. Well if it is anything like the 1st road, it sure to be something to look forward to. We will see.
Posted by Something Cinematic at 7:56 PM