Teaser to "Solo: A Star Wars Story" Features The Young Smuggler on A Swashbuckling Adventure
At long last the first trailer to Solo: A Star Wars Story has arrived. The next installment in the Star Wars Anthology Film series is set to hit theaters this May, and up to now there has been next to nothing on the upcoming blockbuster. However signs of the trailer's release came last week when it was announced that the preview would be debuting on Monday February 5th, and after getting a sneak peek during the Super Bowl the trailer was unveiled the following day. The trailer itself went as expected as it gives some insight on the young Han Solo's (Alden Ehrenreich) who wants nothing more than to become a pilot. Solo's ambition looks to take him across the galaxy as the trailer features a variety of worlds. Along with the seeing the younger Lando Calrissian (Donald Glover) and of course Chewbecca, the preview also features the movie's new characters such as Qi'ra (Emilia Clarke), L3-37 (Phoebe Waller-Bridge) and Tobias Beckett (Woody Harrelson). The preview also shows off the new (or in this case old) design of the Millennium Falcon as well as show off the movie's look which feels reminiscent that of J.J Abrams' Star Trek. Rounding everything was the trailer swash-buckling moments that certainly looks exciting. It may not look like much but this trailer does its job as Solo: A Star Wars Story appears to be a adventurous blockbuster worth checking out this summer.


Heroes Unite in "Avengers: Infinity War" Super Bowl TV Spot
Of all the movies being previewed during Super Bowl, none may have been more anticipated then that of Avengers: Infinity War. Just hours before the big game it was revealed that the next Avengers film would in fact be featured at the annual Super Bowl, and though it took its time appear the TV spot of Infinity War was featured and it did make an impact. The biggest takeaway from the ad was the showcasing of various heroes. Characters such as Iron Man (Robert Downey Jr.) and Doctor Strange (Benedict Cumberbatch) are seen teaming up as well as Captain America (Chris Evans) and Black Panther (Chadwick Boseman). Other heroes like Spider-Man (Tom Holland) and Thor (Chris Hemsworth) had prominent roles in the commercial, and even the Guardians of the Galaxy made an appearance. Even the likes of Nebula (Karen Gillan), who did not appear in the movie's first trailer, made appearance in this spot. Last and certainly not least was Thanos (Josh Brolin) who only had one shot in this spot, but that worked to its advantage as featuring Mad Titan at the end of the commercial only increased the villain's presence. With very little time the TV Spot to Avengers: Infinity War managed to say a lot. The ad shows that the characters that many have come to know over the years are coming together for this massive event, but whether or not this event will work remains to be seen.


New Trailer to "Jurassic World: Fallen Kingdom" Reveals A Typical Adventure
Amidst all the content revealed on Super Bowl Sunday was the premiere of a new trailer to Jurassic World: Fallen Kingdom. The sequel to the 2015 hit,Jurassic World, is set to hit theaters this June and features Owen(Chris Pratt) and Claire (Bryce Dallas Howard) returning to the island in order to save the dinosaurs from destruction. The trailer quietly debut during the Super Bowl, and given the preview's delivery its subtle marketing may not be surprising. The preview does feature new content on the movie such as new characters and story elements. However,at this moments, certain aspects do not seem appealing. In fact some of the story elements feel reminiscent that of The Lost World Jurassic Park; although  the movie looks to be mixing these elements with the concepts from Jurassic World. Along with familiar elements, and showcasing the destruction of the island, it feels the like the trailer reveals the plot of Fallen Kingdom in its entirety. This concern may not come true as it all may depend on how the story plays out oppose to what happens in this upcoming adventure. With an eerie atmosphere,as well as some good effects, the trailer to Jurassic World: Fallen Kingdom does showcase a big time adventure, but with the new details to the story I cannot help but wonder just how adventurous this installment will really be.

New Trailer to "Deadpool 2" Shows Off Cable, Action and Humor Fitting the Merc with the Mouth
This week has had no shortage of previews. Along with the likes of  Avengers and Star Wars also making his presence known is none other than the Merc with the Mouth: Deadpool. Deadpool 2 will be shooting onto the silver screen this summer and features the anti-hero joining forces with the likes of Cable (Josh Brolin). Reports suggested that a trailer would be debuting on Valentines Day but that is no longer the case as the preview came out a week earlier. The trailer focuses on Cable in a gritty manner, but this tone does not last long as Deadpool quickly inserts himself into the preview. The trailer pokes fun at other movies such as Justice League, Toy Story and (possibly) Avengers; and it does so in pretty good taste. The preview also features a number action sequences as well as showcases a sense of insanity that is right up Deadpool's alley. All and all the new preview to Deadpool 2 lives up to the series' standards as it looks to be an exciting and crazy blockbuster for 2018. 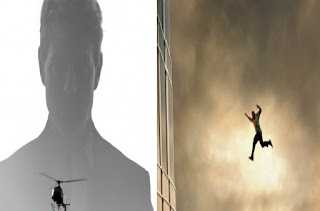 Avengers and Star Wars Led a Lackluster Lineup of Super Bowl TV Spots
Avengers: Infinity War was without a doubt the standout TV spot during this year's Super Bowl, but where did this leave other cinematic commercials? Super Bowl 52 featured a few of TV spots for upcoming movies such as The Cloverfield Paradox (which premiered on Netflix right after the Super Bowl), the action thriller Skyscraper and the next installment in the Mission Impossible franchise: Mission Impossible Fallout. Yet when looking at this lineup it is no shock why the likes of Infinity War and Solo ended up stealing the show. Aside from the surprise of The Cloverfield Paradox none of the other ads came off as must see movies. While there is a chance that both Mission Impossible: Fallout and Skyscraper could end up being hits this summer, these two movies did not have the presence to drive this year's Super Bowl ads. Then again even Avengers and Star Wars did not walk away completely unscathed. Although both spots stood out the ads were also lost in the shuffle as both (not to mention most of the commercials) were too far and in between each other to keep the momentum going. This year may have had its moments but when it came right down to it the TV Spot lineup for Super Bowl 52 was lackluster to the point where not even the likes of Avengers: Infinity War could save it. 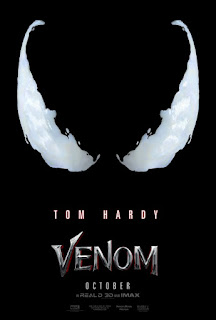 First Teaser Poster to "Venom" Reveals A Thematic Image For Comicbook Spin-Off
Spider-Man certainly has a busy year in 2018. Not only will the Wall Crawler appear in Avengers: Infinity War but the franchise will cover new ground this year with movies such as the animated feature Spider-Man: Into the Spider-Verse. Also breaking new ground for the franchise will be the first film in Sony's Spin-off series Venom. The upcoming film centers on the iconic villain has been in the works for sometime and now the Anti-Hero will get his time to swing onto the big screen with this upcoming movie directed by  Ruben Fleisher  and starring Tom Hardy as Eddie Brock. Although the movie is still 9 months away that did not stop Sony unveiling the teaser poster to Venom. Like any good teaser poster, this one sheet show's very little but says a lot. The image is thematic as it has horror tone and feels very much like a comic book cover. The new poster is a great way for Venom to start its momentum in marketing, but with this unveiling a question emerges: does this mean the first trailer will be coming soon? The answer to that question is...

Teaser to "Venom" Teases Dark Tone and Character!
With the teaser poster being revealed it came to no surprise that the trailer for Venom would be coming soon and after one day the first preview to the Marvel film crawled its way online. As previews go the teaser to Venom does just that as it teases several elements for the upcoming movie. The trailer gives a first impression of Tom Hardy as Eddie Brock which is already shaping up to be a captivating portrayal. The preview also feature snippets of other factors such as Michelle Williams as Ann Weying, other central characters and a brief image of the symbiote. The preview creates a tense atmosphere which only helps to develop a matter of intrigue for the superhero film. Despite Venom not being shown in his entirety the trailer was still effective as it features the right tone and moments to makes this superhero movie one to be excited for. 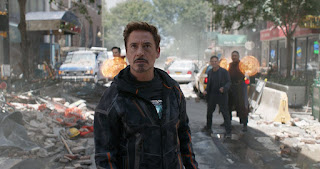 Could "Avengers Infinity War" be the Longest MCU Film?
There is still some time before Earth Mightiest Heroes assemble for Avengers: Infinity War, so this is the perfect time to speculate on the blockbuster. While some may wonder about details such as Thor's new hammer or which character is going to bite the dust, one question that has me pondering is just how long will this movie be? With so many elements and characters coming together in this movie it is hard for me to believe that Infinity War could end up being the standard two hours. It seems more likely that Infinity War's runtime will end up being close to Captain America: Civil War (which is 147 minutes),but then again it also possible that the third Avengers film could become the longest film in the MCU. Infinity War needs the right amount of time to bring all of these elements together a so a long runtime would be understandable. It will likely be a good month before news on Infinity War's runtime comes to light, so for now I will just state that it would not surprise to see third Avengers film become the longest movie in the Marvel Cinematic Universe. 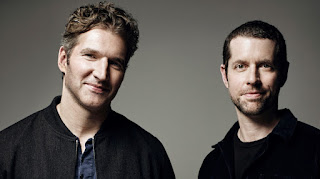 Game of Thrones Creators to Produce/Write New Series of Star Wars Films
Major news shook the Star Wars franchise this past week. In a surprising update Lucasfilms revealed that Game of Thrones creators David Beniott and D.B. Weiss will be writing and producing a series of films for the Star Wars franchise. This new series will break of away from both the Skywalker Saga and the upcoming trilogy being developed by Rian Johnson. This update was a surprise to say the least. As of right now it is anyone's guess what these movies will be about. The movies could be center on the subjects such as the Old Republic or it could be about something else entirely. The possibilities are endless, but regardless of that: it is good to see that the Star Wars franchise is expanding. How this series of movies will effect the Galaxy Far,Far Away remains to be seen, but with Beniott and Weiss' involvement one cannot help but curious at lies ahead for Star Wars.

That's all for this week's Cinematic New Reel. I know that there were a few stories that I missed so if you want to discuss feel free to do so below.With that said I hope you have a good day and stay tune next week for another Cinematic News Reel.

Posted by Something Cinematic at 3:02 PM