Welcome to the first (official)edition of the Cinematic News Reel. This has been an idea that I have played around with in the past but was never able to get going-that is until now. How this will work is that this series will cover weekly movie news stories, rumors (if there is any merit to them) or topics that I can briefly discuss. So without further ado let begins this week's Cinematic News Reel.


First Trailer to "Ant-Man and the Wasp" Features Big Time Spectacle and an Expected Plot
To no surprise Marvel Studios have unveiled their first preview to Ant-Man and the Wasp. The sequel to 2015's Ant-Man will be making its way to the big screen this July, and with Black Panther just weeks away, it only makes sense that content for the Marvel blockbuster would appear sooner rather than later. Sure enough the trailer has made its way online and it plays out all too expectedly. The preview features details about Scott Lang's (Paul Rudd) involvement in Captain America: Civil War and how it affected the likes of Hank Pym (Michael Douglas) and Hope (Evangeline Lilly). The trailer also centers on the heroes being on the run; though how much this concept will play into the movie's story is unclear at this time. Unsurprisingly the trailer had plenty of spectacle to it with variety of things changing size and a chase sequence that could very well be a highlight for the film. Topping things off for the trailer was the showcasing of Wasp in action as it showed off the heroine and the movie's sense of effects. The trailer to Ant-Man and the Wasp played very much like a trailer for a Marvel movie, and whether that is a good or bad tings remains to be seen. As for now it would seem that Ant-Man and the Wasp will be a blockbuster right for the summer season. 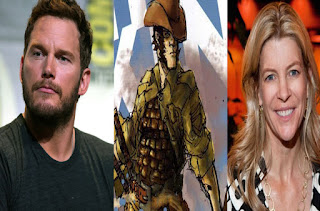 Michelle MacClaren set to direct "Cowboy Ninja Viking"
It would seem that Cowboy Ninja Viking has founds its director. This adaption to A.J. Lieberman's graphic novel has been trying to hit the silver screen for sometime now with the movie originally going to be developed by Walt Disney Studios. However studio decided to not go through with the project so Universal Pictures picked up the rights for the movie and will star Chris Pratt in the title role. When it comes to directors, many names were considered such as John Wick's David Leitch and Chad Stahelski, but the studio has decided to go with Michelle MacLaren to helm Cowboy Ninja Viking. MacLaren is known for her work on television as she directed episodes on hit series such as The Walking Dead, Westworld and Game of Thrones. She was originally going to direct Wonder Woman but decided to leave the project due to creative differences. Cowboy Ninja Viking marks Michelle's debut as a movie director, and given the comic's unique concept perhaps this adaptation needs fresh eyes to make it work. Only time will tell. 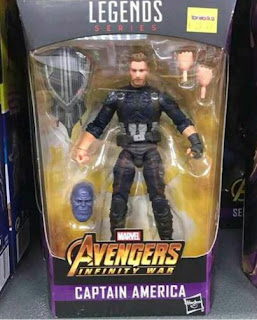 Captain America's New Shield Revealed for "Avengers: Infinity War"?
With the film just months away it is no surprise that many are eager to get more details on Avengers: Infinity War. The anticipated blockbuster has many questions going into it and among them is the direction surrounding the Star Spangled Man with the Plan Captain America (Chris Evans). The film's trailer featured a rugged looking Steve Rodgers who has clearly gone underground since the events of Captain America: Civil War. The preview features Capt charging the enemy without his famous shield, so the question is how will the First Avenger be fighting Thanos' army? Well this question may have in fact been answered this week as Hasbro has unveiled their Marvel Legends Action Figures for Infinity War. Among them is Captain America who comes with a Wakandan Shield. Now this could just an accessory for the action figure, but given some of the scenes from the trailer it definitely makes sense for Captain America to be using this weapon in the battle a head. However it is unlikely that this shield will be Steve Rodger's permanent weapon for the movie. Although nothing is certain it would not surprise me if Capt will regains his iconic weapon (as well as an updated look) for the impending battle with Thanos. 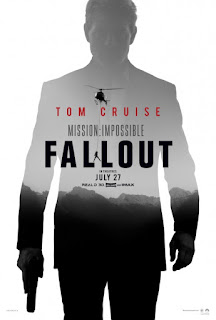 "Mission Impossible: Fallout" unveils a Mysterious First Poster
Mission Impossible returns to theaters this summer. For the moment details on the sixth installment are fairly scarce with one of the few updates being the film's title. However new info on the movie looks to be underway as Paramount Pictures has released the first poster to Mission Impossible: Fallout. The one sheet does not reveal much but given that it is a teaser poster that is not shocking. Along with featuring a silhouette of Tom Cruise as Ethan Hunt, the poster shows an images of a helicopter flying over a forest. This could mean that the story will deal with Ethan and the IMF surviving a harsh wilderness in order to complete their objective. Then again the one sheet could be taking a notes from Mission Impossible: Rogue Nation's teaser poster which centered on the movie's opening scene. At this point it is likely the latter. Although with the unveiling of this poster it is likely that the first to Mission Impossible: Fallout will on the way in the near future. 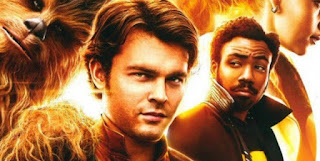 Solo: A Star Wars Story Trailer Soars Monday!
With Star Wars: The Last Jedi concluding its run in theaters, many have pondered just one question: where the trailer to Solo A Star Wars Story? The next installment in the Star Wars Anthology saga is set to hit theaters this May but with little known on the film (especially since Ron Howard took over as the movie's director), it is getting hard to believe if Solo will be able to make it to its release date. However things are looking up for the movie as the first trailer for Solo: A Star Wars Movie will be unveiled this Monday. Reports indicate that the trailer will premiere during ABC's Good Morning America and hit online soon after. With few details on the movie, it is hard to say what to expect from the upcoming trailer. However it does seem likely that the preview will give viewers an idea of what Solo is all about, feature a few swash buckling moments and showcase the Millennium Falcon flying through galaxy. All and all that would not hurt the trailer's chances of building momentum for Solo: A Star Wars Story.

That does for this week's Cinematic News Reel. If there were any stories that I missed feel free, or if any of these stories stood out to, feel free to comment on them below.

Posted by Something Cinematic at 6:00 AM