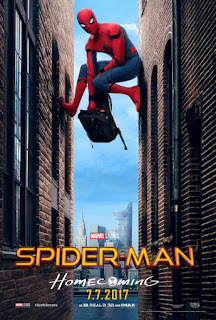 Many superheroes have transcended the pages of comics into the realm of pop culture-particularly film. Among these heroes is none other than Wall Crawler himself: Spider-Man. Often labeled as Marvel Comics poster child' Spider-Man has become an icon in pop culture as the character has had the likes of television series and video games to his name. The likes of movies has not escaped the iconic hero as Spider-Man has swung onto the silver screen on five different occasions. Now the Web Slinger returns yet again to big screen in Spider-Man: Homecoming. Directed by Jon Watts Spider-Man Homecoming starts a new adventure for the icon as the latest blockbuster marks Spidey's first solo film in the Marvel Cinematic Universe. The new prospect from both Marvel and Sony looked promising for the franchise, however certain elements (like the marketing's excessive use of the MCU) left this Film Adventurer a little worried about Spider-Man's latest outing. So is Spider-Man: Homecoming a defining entry in the franchise or does this summer blockbuster get stuck in its own web?

Homecoming tells the story of Peter Parker (Tom Holland) who continues his role as Spider-Man (after the events of Captain America: Civil War) and tries to maintain balance in his school life. Though Peter is active in his role as the "Friendly Neighborhood" Spider-Man the young hero feels that he can do more to protect the city. Peter gets a chance to prove himself when he stumbles on a criminal operation run by Adrian Toomes/The Vulture (Michael Keaton) to sell high tech weaponry to the criminal underworld. Peter's determination to stop the Vulture gets the better as him as he quickly realizes that with great power comes great responsibility. 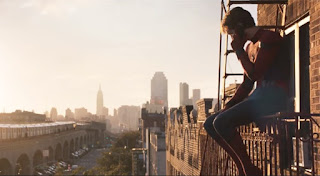 The story of Spider-Man has been told in a variety of ways on the silver screen from telling his origin story to capturing the themes that define the character. So for Homecoming to reintroduce the character in a new story would not be easy, but this superhero movie managed to pull it off. What was so intriguing about Homecoming's plot was its straightforward nature. The plot was an adventure through and through as it dealt with Spider-Man fighting crime while balancing his time at school. This direction in the story was refreshing and it allowed the movie to set itself apart from its predecessors; but this was also a double edged sword for the movie. While the straightforward narrative was effective it did prevent the story from expanding on particular plot points and themes which created an underwhelming execution for the film. Thankfully the story had other things working in its favor,such as its character driven aspect, which allowed this superhero tale to be as intriguing as it was entertaining.

When Tom Holland jump on the scene last year as the Wall Crawler he certainly got my attention. Holland's portrayal as Peter Parker was a blend between his two predecessors as well as fitting characterization of Spider-Man himself. Yet the question remained to be could Tom Holland take center stage in a Spider-Man solo film. The answer to that question turned out to be a spectacular yesas Tom Holland's portrayal as Peter Parker truly made the movie worthwhile. Though his character was not completely defined (though this might be further explored in future movies)  the direction and development of Peter Parker made the character easy to root for. Yet a lead is only as strong as the cast around him and the supporting cast to Spider-Man: Homecoming was good...enough. There was a lot of strength and charm to the supporting characters, particularly with Ned (Jacob Batalon). However characters such as Liz Allen(Laura Harrier) were a bit too one noted for my taste. Then there was Michelle (Zendaya) whom was a mixture of both of these traits. Michelle certainly had stand out moments that made her interesting, but her presence in the film was lacking and made her feel more like a gimmick than a character-though admittedly there is a reason for Michelle's lack of development. In the case of villains the Vulture made for an effective antagonist. Though his character could have been furthered explored Michael Keaton's performance as Toomes more than made up for the rogue's shortcomings. Cementing out the cast were the supporting performances from the likes of Marisa Tomei, Donald Glover, Jon Favreau and Robert Downey Jr. Each of them, and few other surprising appearances, helped to give this superhero ensemble a fitting (albeit restricted) impression. 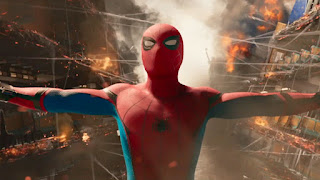 The concept of spectacle is nothing new to superhero movies especially when it comes to Spider-Man. In the case of Homecoming the spectacle aspect played out as expected. The effects to the movie were stellar while the cinematography was stylish. The likes of effects also added to other elements such as action. The action scenes to Homecoming lived up to the standards from past Spider-Man films all the while being able to stand out on their own. The Washington sequence was particularly good as it blended humor and intensity while having a flare of creativity to it. In the matter of music the score by Michael Giacchino, while not particularly memorable, was energetic and felt right for both the movie's tone as well as the concept behind Spider-Man.

In many ways Spider-Man: Homecoming was a superhero movie that was well needed. The movie has a web of issues, such as its execution in story and characters, but it more than makes up for it thanks to its strong lead, stellar tone and good sense of spectacle. I cannot say that this new Spider-Man film is the best and most defining movie in its franchise, but I will say that Spider-Man: Homecoming is certainly a dynamic installment in the superhero series,a refreshing entry in the Marvel Cinematic Universe and just a solid film for the season.

Posted by Something Cinematic at 3:13 PM