Rogue One A Star Wars Story Review: A Worthy Successor To The Name Star Wars! 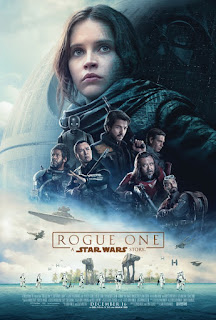 Not so long ago in a galaxy nearby Star Wars returned to the silver screen.  Last year the acclaimed franchise came to theaters everywhere with Star Wars: The Force Awakens. No matter what attendees thought about the film there was no denying that Episode VII made a statement and left moviegoers pondering of what was to come next. Viewers will get those answers in Star Wars Episode VIII, but that chapter won't be arriving until next Christmas. However just because the Saga does not returned until 2018 does not mean the franchise is taking a break as hitting theaters this season is Rogue One: A Star Wars Story. Directed by Gareth Edwards Rogue One begins a new series of Star Wars films that tells standalone tales in the franchise. In the case of Rogue One it takes place between Episode III and Episode IV and tells the story of how the Rebels stole the Death Star plans. So with Star Wars taking a new direction in the celluloid system does Rogue One keep the franchise in hyper drive or us this mission a failure?

The story to Rogue One centers on Jyn Erso (Felicity Jones): an outcast who fights to survive. After being imprisoned by the Empire, Jyn is rescued by the Rebel Alliance who task with a mission to find her missing father Galen Erso (Mads Mikkelson): whom is responsible for constructing the Empire's super weapon known The Death Star. With the help of Captain Cassian Andor (Diego Luna) and his droid K-2S0 (Alan Tudyk), Jyn travels to find Saw Gerrera (Forest Whitaker) who abducted Bodhi Rook (Riz Ahmed): a former Imperial pilot who knows the whereabouts of Galen. With the help of guardians Chirrut Imwe (Donnie Yen) and Baze Malbus (Jiang Wen), the unlikely crew set off on adventure that leads them to steal to the Death Star plans from Director Orson Krennic (Ben Mendelsohn) and the rest of the Empire.

The story to Rogue One was a great deal of many things. For starters it was a massive adventure which was to be expected due to the series' history. The pacing could be a bit quick for my taste, but that did not stop the plot from being exciting as well as thrilling. Yet despite the movie's adventurous aspect the story could be quite dark. So much so that the predecessors like The Empire Strikes Back and Revenge of the Sith would find this tale impressive; most impressive to be precise. All this culminated to a finale that was thrilling, dramatic and everything that you should expect from a Star Wars conclusion.

Star Wars has always been known to having a cast rich with character, and Rogue One was no exception to this. In fact I would go as far to say that Rogue One's cast was indeed worthy to the one  Star Wars' greatest factors. The crew of the Rogue One was an ensemble similar to the likes of The Magnificent Seven and The Fellowship of the Ring. You had strong leads in the likes of Jyn and Cassian, interesting supporting characters in the likes of Chirrut and Baze and then there was K2 who simply stole the show in every scene that he was in. Adding to this cast were the supporting performances from the likes of Mads Mikkelsen and Forest Whitaker. Then there was Orson Krennic who had simple motivations, but was effective none the less. Add some surprise appearances and the return of Darth Vader and you have a Star Wars cast that was definitely strong in the force. 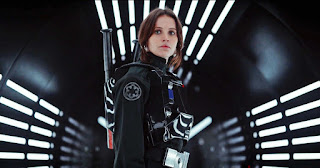 Star Wars is known for its spectacle; it is practically its bread-and-butter. So it was no surprise that Rogue One would be riddled with effects.  However what surprised me was just how good the effects were for this spinoff film. There were big moments such as the planetary destruction sequences. The scenes were the Death Star fired its main weapon were simply outstanding to see as they were the precise detail behind them was only complemented by their grandeur. Yet it was some of the smaller effects that impressed me the most. The movie used CGI to recreate characters such as Govenor Tarkin, and it was done in a way that brought a new meaning to the term "movie magic". Adding to the effect was the film's cinematography. The visual sense of Rogue One was a blend of several aspects seen in previous Star Wars films, but this actually helped the movie by giving it a distinct look. The action was, as expected, good. The movies action sequences were phenomenal and certainly lived up to the franchise's long history of big-time b lockbuster moments. I was particularly impressed with the Battle of Scarif which simply needs to be seen. Last and certainly not least was the music which was composed by Michael Giacchino. This film's music had a lot to live up to as it was the first Star Wars movie to not feature a John Williams score. However the score was outstanding and fit right in with the other compositions of Star Wars; all the while finding its own signature tracks and tunes.

There is no doubt about it: Rogue One A Star Wars Story is fantastic. The film takes everything known from the Star Wars franchise and expands upon it with its story and characters. Along with strong direction were the technical elements which were simply awe inspiring. In just about every aspect Rogue One proves to be a worthy successor to the Star Wars named as it sets the pace for this new spin-off series;and it is one of  the best blockbusters that I have seen all year.

Posted by Something Cinematic at 9:36 PM