Kubo and The Two Strings Review: An Adventurous Classic from Laika Entertainment 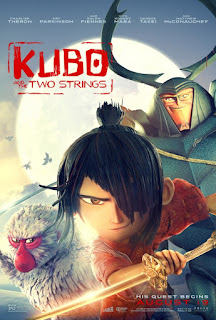 This animated feature centers on Kubo (Art Parkinson): a one eyed boy who lives in hiding with his mother. After staying out during the sunset, Kubo is discovers by his mother's sisters (Rooney Mara) whom are moon spirits that have come for Kubo other eye. After his mother sacrifices herself, Kubo is sent off to find his father's armor with the help of Monkey (Charlize Theron): a wooden charm brought to life thanks to the magic of Kubo's mother. On their quest the two meet up with a cursed warrior named Beetle (Matthew McConaughey) and together the three set off to find the magical armor that will protect Kubo from the Moon King. 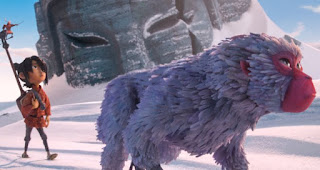 The tale of Kubo and the Two Strings was certainly a journey worth sitting through. While the pacing at times could be quick, particularly at the start of Kubo's adventures, I found that the plot to be quite entertaining. Yet as the quest continued, I soon discover that this story was one filled with twist and turns. While some of the movie's more shocking moments became predictable, I cannot deny that they were effective by making Kubo's plot all the more intriguing. As the journey reached its conclusion, I found the tale of Kubo to be one filled with adventure, charm and sincerity. 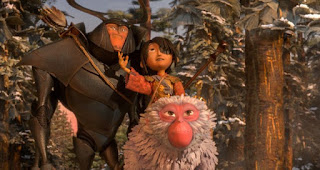 The cast to this animated feature may not be a massive one, but it was definitely effective. The trio of Kubo, Monkey and Beetle made for a fantastic pairing as these leads were rich with character. Whether there was scene with Kubo and Monkey, or Monkey and Beetle, or Beetle and Kubo, there was a dynamic between these heroes that I could not help but enjoy. It also helped that each of the actors' performances brought the right sense of dimension to each character; particularly with Charlize Theron and Matthew McConaughey. Even the villains had their own merits to them. While they may not much screen time, the antagonist managed to have strong motivation and performances that were effective. I particularly liked Rooney Mara's performance as the moon sisters as they was quite creepy. The film also has a solid performance by Ralph Fiennes as the Moon King; albeit a brief role from the actor. Along a fun performance from Brenda Vaccaro as well as cameo from George Takei the cast to Kubo and the Two Strings was filled with fantastic character; which seems to follow suit with past Laika films. 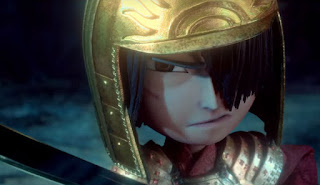 It was not shocking to see Kubo and the Two Strings being stellar with its animation as, much like its predecessors, the stop-motion to Kubo was solid; but set this film apart from the other Laika movies was the grandeur behind this animated feature. From the massive action sequences to the more creative scenes in the movie, there was definitely a sense of spectacle to the animation which helped give this animated flick its own sense of creativity. I was also surprised with how action packed this movie turned to be. Action is no stranger when it comes to the Laika films, but Kubo and the Two Strings personified on this factor by having well choreographed fight sequences such as the battle on the boat. Along with movie's fantastic animation and action was the music by Dario Marianelli. The score to the film had a good sense of variety by being both adventurous as well as touching.

Kubo and the Two Strings was everything that I could hope for and a little more. The movie featured a wonderful sense of adventure, good humor and atmosphere that was both complex and creative. It nay not be a defining film for Laika Entertainment but Kubo and the Two Strings is still a great animated feature for the studio; not to mention being a amazing film for 2016.

Posted by Something Cinematic at 4:40 PM