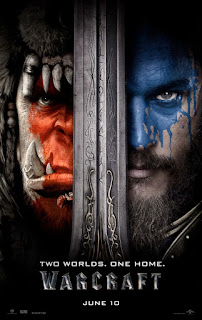 The relationship between movies and video games has not been a healthy one. When it comes to movies based on popular video games the finished project rarely sits well with the likes of moviegoers, critics and fans to the games. Yet that does not stop Hollywood from developing these movie, and the latest take is no exception. The newest video game to head to a celluloid format is none other than popular series: Warcraft. Created by Blizzard the Warcraft games have taken gamers to the world of Azeroth where players used the likes of men and orcs to battle each other in grand scale battles. With several entries in the series (including the popular MMO World of Warcraft) playing an important role in pop culture, it was no surprise the studios would be interested in making a movie about this video game franchise. With director Duncan Jones at the helm, Warcraft looked like the video game had came to life on the silver screen thanks to the trailers have a major sense of spectacle. However could this film adaptation live up to the name of Warcraft, or is this another game over for the movie genre?

The film centers on  two opposing factions: the army of men and orcs. Led by Sir Anduln Lothar (Travis Fimmel), the armies of Azeroth discovers that orcs have come to their lands to find a new home after the world,Draenor, reached the point of annihilation. With the help from the mage Khadgar (Ben Schnetzer) and the half orc Garona (Paula Patton), Lothar must stop the orcs from opening a gateway that would release an orc horde onto Azeroth. Meanwhile the Orc chieftain Durotan (Toby Kebbell) seeks to save his kind from his leader Gul'dan (Daniel Wu); and will do whatever it takes to protect his people and his family.

With the plot featuring two perspectives, it was no surprise that there was much to the story of Warcraft. Yet the grand nature to the story could be a double edge sword for the fantasy film. While it was not hard to follow, the plot  felt a tad sporadic as the tale of the men and orcs jumped around each other to the point where individual scenes seemed rushed. That being said there was much to like about this story. While it could feel choppy, the story in itself was quite engaging as the concept behind this plot had a compelling nature to it. Playing out in an unexpected manner, the plot showed much promise by not only having a unique presentation but also opening itself to idea of being apart of a bigger story. Even if you know nothing about the Warcraft franchise, this story showed that you do not need to be a fan to enjoy this fantasy tale. 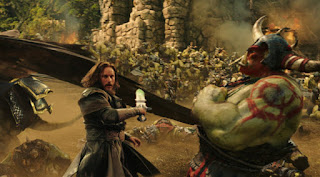 The film featured a major cast, and the ensemble certainly had a lot of character to it. While some of the character's development could be too direct, there was no denying that the cast had a lot of personality to it. Characters like King Wrynn (Dominic Cooper), Lady Wrynn (Ruth Negga), Doomhammer (Robert Kasinsky) and Blackhand (Clancy Brown) may not have had much substance to them, but the likes of presentation and performances helped made these characters investing as well as engaging. The principle cast was faily impressive. Lothar made for enjoyable action hero while both Garona and Khadgar were characters that I could easily get behind. Along with this trio was Durotan whom was a protagonist that I wanted to see more of; and this was thanks the orc's motivation as well as the performance from Toby Kebbell. Along with a solid supporting performance from Ben Foster as the guardian sorcerer Medivh, this cast felt right at home when it came to being an ensemble for a fantasy film. 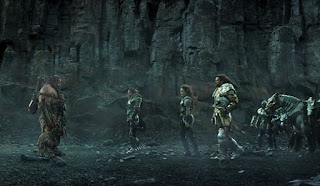 With a concept like Warcraft it was no surprise that the film's technical elements would center on the area a spectacle. In the matter of effects, the film was simply stunning. While it may not have brought nothing new to the area of visual effects the film managed to use likes of cg and motion capture to the best of their abilities as the look to Warcraft felt appropriate for a fantasy film. Standing by the effect was the movie's action. While this element was not the most outlandish that I have seen this year, it was still effective for the movie as the action sequences ranged from decent to just enjoyable. Composer Ramin Djawadi is no stranger to fantasy based score. While his work for Warcraft may not have been perfect it was still fitting for the movie as the music was both magical and adventurous. All of these factors showcased the creative direction behind Warcraft. The vision from Duncan Jones created a one of kind blockbuster as concepts like magic as well as the interaction between orcs and men brought a new dynamic to the idea of video game adaptations.

While I may not be the biggest fan of this video game series, I cannot deny that Warcraft impressed me. The movie did have some missteps in its strategy; such as the likes story structure. However the film made for its issue with the likes of a coherent cast and creative direction. While the movie may not be the blockbuster to end all blockbusters, Warcraft finds a way to be an entertaining feature to see this season; and a film that seemingly does justice to idea of video game movies.

Posted by Something Cinematic at 1:24 PM