Alice Through the Looking Glass Review: Disney Sequel is a Harmless Adventure 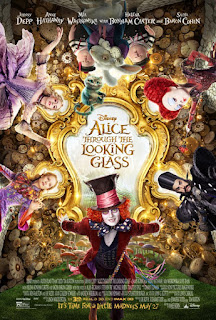 In 2010 Walt Disney Pictures took moviegoers down the rabbit hole. Though the story of Alice in Wonderland has been a staple film in the Disney Vault, the studio decided to bring a new tale to silver screen; and this reimagining of the Lewis Carroll story was directed by none other than Tim Burton. This combination seemed like a match made in heaven, but the film's success was mixed. While opinions varies, the consensus between most moviegoers was not high for this reimagining. However the movie found commercial success in the box office to the point where the studio was comfortable in creating another adventure for Alice. The latest film, Alice Through the Looking Glass, is much like its predecessor as it named after the famous Carroll Novel-but is loosely based on the actual story. With its time traveling theme and creative visuals could Through the Looking Glass be a trip worthy of its name, or is this adventure too mad to succeed?

Continuing from the first film, Through the Looking Glass continues the story of Alice (Mia Wasikowska) who has become an explorer after her last trip to “Underland”. After getting bad news in her life, Alice is lured by the caterpillar Ansem (Alan Rickman) to return to Wonderland in order to help her friend: The Mad Hatter (Johnny Depp); whom has fallen ill after recalling an old memory. In order to save her friend, Alice must travel through time in order to discover the mystery behind the Hatter's missing family, however the young heroine is chased by Time (Sasha Baron Cohen) after Alice takes an item known as the chronosphere: an item that has the power to travel and destroy the fabric of time. 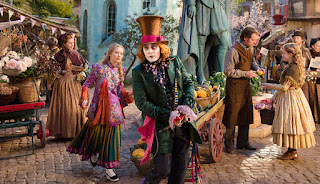 If you are hoping for this tale to resemble the novel of Alice Through the Looking Glass, then you will be greatly disappointed. However the fact that this film only similarity is that its shares the novel's name was to be expected. Yet this was not my prime concern with the movie's story. The biggest issue I had with the plot was that it was a fairly lackluster one. When it came down to it, the major plot points had very little impact on the story itself. Though the very foundation of time was in peril, there was little gravity to the whole situation. However this was not to say that the story did not have its moments. Some points, such as the seeing the backstory of the Red Queen (Helena Bonham Carter) and the White Queen (Anne Hathaway), did help to give a story sense of complexity. Plus where the story lacked in dimension it made up for in its sense of adventure. Alice's journey through time was quite entertaining as it had several enjoyable scenes that lived up to the movie's fantasy aspects. 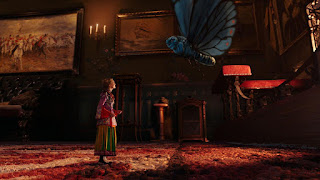 The stories of Wonderland have been filled with rich and memorable characters and this has always been reflected in the film adaptations of Lewis Carroll's beloved book. I feel this has remained true with the 2010 film; though the movie's ensemble had their own sense of style when it came to standing out. In the case of Alice Through the Looking Glass I felt that the cast could be a little underwhelming, but otherwise enjoyable. Mia Wasikowska had another solid performance as Alice. Though her direction could be a little broad, Alice more than made up for this shortcoming with her likeable personality. Johnny Depp on the other hand was a little hit and miss as the Mad Hatter. Depp's performance was not bad, but the character of the Mad Hatter felt more like a supporting character rather than a principle player. If there was one surprise from the cast it had to be the character of Time. The direction and performance of Time made him a character who I could not help but enjoy (and his minions were also fantastic). The other inhabitants of Underland did not have much development but they still had their times to shine; whether it was riddles of the Cheshire Cat (Stephen Fry) or the frantic behavior of the White Rabbit (Michael Sheen). To round the cast out were appearances from the likes of Lindsay Duncan, Rhys Ifans, Richard Armitage and of course Alan Rickman; which only help to create a cast that had plenty of color to it. 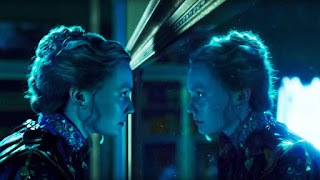 The first film featured a sense of spectacle that seemed appropriate for the likes of Wonderland, and the latest film's visuals are about the same as its predecessor. While there was nothing too magical about this film's effects, this technical aspect did work in the context of the film with moments, such as Alice journeying through the Ocean of Time, showing off the movie's creativity. The score by Danny Elfman was about effective as his composition to the 2010 film. The movie's soundtrack heavily featured the same melodies of its predecessor, but this matter fell under the idea of “it if ain't broke, don't fix it”. The movie did have a creative side but I could not help but wonder if maybe this film could have pushed its imagination a little further. While its idea of time was interesting, concepts such as the Looking Glass could have easily been looked into and it would have only benefitted the movie's presentation. Well if anything I did enjoy the movie's comedy as the humor was tolerable and worked well in the context of the film.

Alice Through the Looking Glass is not the adventure of a lifetime. When compared to its predecessor, this sequel falls short due to its lack in presentation. However this blockbuster is still an enjoyable adventure. While it may not do much to truly stand out, the film does has its own sense of charm and made for a fun time at the movies. While It may not have been the greatest trip to Wonderland, Alice Through Looking Glass still managed to be a harmless and enjoyable time at the movies.

Posted by Something Cinematic at 9:31 AM