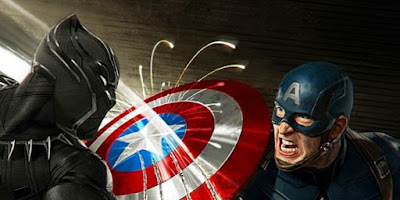 Captain America Civil War is now playing in theaters. The latest film from Marvel Studios raises stakes for both Captain America and Iron Man as the two lead heroes against one another. The film included many of great deal of things, and among Civil War's major moments was the introduction of Black Panther (Chadwick Boseman). The character made a strong debut in the new film and made me ecstatic to see more on T'Challa. Fortunately it will not be long til Black Panther returns to the silver screen as the character will have his very own film in the winter of 2018. With Creed's Ryan Coogler set to direct, I am curious to see just where Marvel takes the King of Wakanda. However, due to events of Civil War, I wonder if Black Panther will be the only hero to appear in the upcoming film.

Read the full article now on Moviepilot/Creators.
Posted by Something Cinematic at 11:20 AM