In the Heart of the Sea Review: Sets Sail with Strong Cast, Themes and Adventure 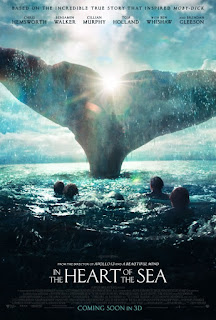 Many know the name of Moby Dick. There is no doubt that the novel written by Herman Melville has become an iconic piece of literature; as the story has been told time and again in a variety of mediums. Yet out of all various of this tale, none have actually gone into the origin of the story itself. The fact is that the story of Moby Dick is based on a real tale which can now be seen in the film: In the Heart of the Sea. Directed by famed filmmaker Ron Howard, In the Heart of the Sea is based on the Nathan Philbrick novel reflects on the real events that was said to inspire the American Epic. With this film being pushed back for the Holiday season, my curiosity to this movie was quite high. However does this new adventure sail the high sea, or does In the Heart of the Sea sink from over hype.

In Heart of the Sea captured the story of Herman Melville (Ben Whishaw) speaking with former sailor Thomas Nickerson (Brendan Gleeson) about his time with on the Essex. Thomas speaks about his time as a cabin boy (Tom Holland) and when sailed with Owen Chase (Chris Hemsworth), George Pollard (Benjamin Walker) and the rest of the Essex crew in order to go whaling. However things go wrong when the ship is attack by a massive, scarred and pale whale. Once the ship is destroyed, the Essex crew must find a way to return home while surviving the harshness of the sea; and the whale who hellbent on hunting the sailors. 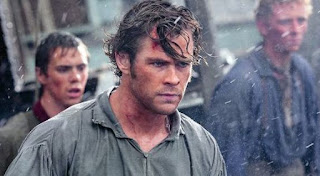 The story to this adventurous thriller was a little hard to get into. I was not sure what was, but something in the plot's execution made the movie a bit difficult to follow. Now this not to say that the story lost its course. When it came to the story's themes, such as whaling and means to survive, the plot of In the Heart of the Sea was quite thrilling and captivating. I liked how the story of the elder Thomas telling the tale played a major role in the plot oppose to just getting things set up. The story behind this film could be a bit rocky, but as things progressed, this plot did manage to shape into a thrilling fable. 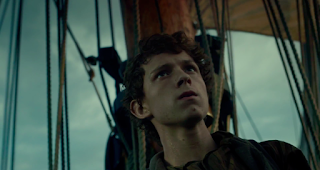 The filmmakers certainly put together a solid cast. When it came to the likes of the character development, this factor could have been stronger and more complex. However the cast more than made up for this shortcoming with their performances. Chris Hemsworth made for a solid lead as Owen Chase; while Benjamin Walker as George Pollard (though his character was a bit contrived) also had a strong performance as the Essex's captain. The supporting cast was also impressive featuring great roles from the likes of Cillian Murphy, Ben Whishaw, Brendan Gleeson and Michelle Fairly. However the notable role that stood out to me in this film was Tom Holland as the young Thomas Nickerson. Mr.Holland showed his merit as the cabin boy by showing off his dramatic range, and being able to act with the likes of Chris Hemsworth. 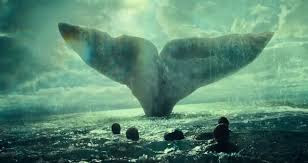 The technical elements to this film was effective, but little off putting in some areas; particularly in the cinematography. The visual direction to this adventure was a bit of a hit and miss. A notable point in the cinematography was the need to feature close up shots on certain objects. I found this to be an issue as the shots could be distracting; but this is not to say the visual direction was completely ineffective When dealing with moments such as getting oil out of a whale and the attack on the Essex, the close shops were quite expressive by capturing the details of the scenes. The score from Roque Banos was very fitting for the film. The music captured an adventure on the high sea, all the while expressing the drama of the movie. The direction in this movie could distracting the style behind this film still in work in favor of In the Heart of the Sea.

In the Heart of the Sea may not have been the adventure I was expecting, but it was adventurous nonetheless. While the presentation could have been stronger, the movie managed to be effective with its concepts and its well structured cast. I found that, perhaps in its own way, In the Heart of the Sea did justice to the real events of the story; as well as capturing the ideas behind Moby Dick. If anything else, this adventurous thriller did manage to sail away as a solid drama.