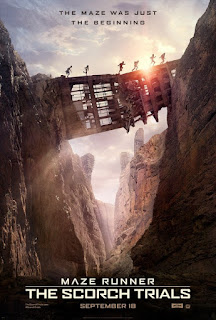 Last year,  a film based on popular novel series took me by surprise. Based on the story by James Dashner, this surprising film was none other then The Maze Runner. I expected this fall film to be just another movie trying to bask in the glory of successful franchises like Harry Potter, The Lord of the Rings and The Hunger Games. However this blockbuster turned out to be a refreshing adventure that had me invested in its story, characters and overall tone. I was so impressed with the film that I could help but be excited for the next chapter in the series. Fortunately a second film was in the works and thankfully the wait was not long. Now in theaters is the second installment to this adventure franchise: Maze Runner-The Scorch Trials. The Scorch Trials promised a big adventure in its trailer, as well as secrets that had me pandering the film's direction However could this sequel continue the momentum for the Maze Runner Series, or does The Scorch Trials burn out the adventure?

Continuing where the first film left off, The Scorch Trials starts with Thomas (Dylan O'Brian) and the rest of the Gladers finding safe passage to a facility run by a man named Janson (Aidan Gillen). However things are not as they seem when the group discover that the facility is run by WCKD: the organization that imprison the kids in the Maze. After making a narrow escape, Thomas leads the group to the mountains to find the resistance group known as the Right Hand; but to get there the group must face not just  WCKD's constant pursuits, but the wasteland known as the Scorch. 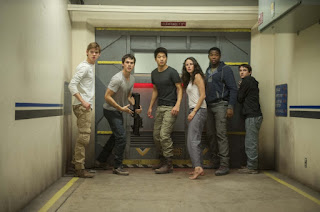 The story to this adventure is fairly straightforward. When it was all said and done, there was not much to the movie's story in the matter of complexity and drastic plot points. However this issue was not a major detraction on the movie's part. While there were few surprises, the story was very much exciting to sit through as the Gladers' journey could be thrilling at times. The story allowed viewers to see the world outside the Maze, and I think the movie was made stronger for this direction in the plot. Another benefit to the story was its pacing. The film ran about 131 minutes and certainly felt it. However this was not bad as the plot's structure kept me invested all the way to the movie's intense climax. 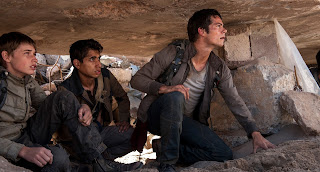 One of The Maze Runner's strongest factors was its cast. Everyone in the Maze, no matter how important they were, felt like a character that you could get invested in. It pleased  me to see that The Scorch Trials did not loose sight this solid element. While some characters had more direction then others, the cast to the film was quite an engaging ensemble. Dylan O'Brien provided another strong performance as Thomas; though his role in this film was about the same as it was in the first movie. Kaya Scodelario improved dramatically from her role in The Maze Runner as Teresa was  more developed in this film, and I was impressed with the overall direction of this female lead. The other gladers( Thomas Brodie-Sangster, Ki Hong Lee, Dexter Darden and Alexander Flores) may not have had a lot of development but each them made for solid characters as I found myself liking all of them. The movie also had its share of new characters. Jacob Lofland did not stand out as Aris, but he still made a great addition to the Gladers. Rosa Salazar as Brenda was another character that I came to like, but her development was a bit on the broad side. Aidan Gillen was definitely a good choice for the villain Janson. The character did not have biggest of impacts,  but the Irish actor made every moment he had count. With  Giancarlo Esposito, Alan Tudyk, Lili Taylor and Patricia Clarkson bringing there A game as supporting characters, it is no surprise to me that this cast had just a strong presentation in this sequel. 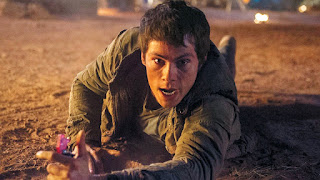 In The Scorch Trials' technical aspects, the movie had its merits. The score by John Paesano was fantastic as it capture the film's more adventurous themes. The action to The Scorch Trials was definitely thrilling. This element was not the most glamorous that I have seen from movies this year, but it was pretty close as it featured one intense sequence after another. Then there were the effects to movie, which were a gleaming hit and miss. When it came to the Cranks the effects for the “zombies” ranged from standard with its cheesy cg effects, or impressive as the details to the creatures had a unique and creepy design. Though the technical elements were not the strongest aspects to the film, they still managed to do job by bringing the world of this The Scorch Trials to life.

Maze Runner: The Scorch Trials is a fitting continuation to its 2014 predecessor. While certain areas were lacking, the movie more then made up for its flaws with factors such as story, characters and action. True this sequel did not exceed its predecessor, but The Scorch Trials managed to be just as good as I find myself excited for the next chapter in the Maze Runner Series.

Posted by Something Cinematic at 4:05 PM