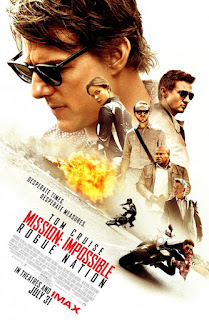 Since 1996  moviegoers have chosen to except their mission by heading to theaters to watch the Mission Impossible franchise. Mission Impossible has been among the few TV series that has successfully jumped from the small screen to the big one and managed to be successful. Now with four movies to its name, it is hard to see where filmmakers can take this action series. Yet it seems that the studio are keeping Mission Impossible active with the latest installment-Mission Impossible: Rogue Nation. Directed by Christopher McQuarrie, Rogue Nation certainly looked interesting with the IMF facing a shadow organization. However with four films and the series reaching a decade in age, can Rogue Nation accept the mission to entertain moviegoers?

Rogue Nation once again features agent Ethan Hunt (Tom Cruise) on another dangerous mission. Hunt is determine to find the organization called the Syndicate and the mastermind behind the “Rogue Nation”. However things get complicated when CIA agent Alan Hunley (Alec Baldwin) disbands the IMF and makes Ethan a fugitive. With the help of his comrades (Simon Pegg, Jeremy Renner and Ving Rhames) as well as the suspicious Ilsa Faust ( Rebecca Ferguson), Ethan is determine to bring down the Syndicate at any cost. 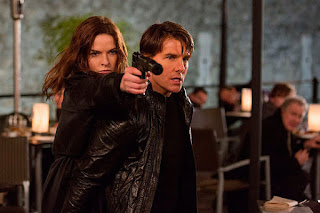 Rogue Nation's plot certainly has merit to it. When it came to concepts of shadow organizations and being on the run, this story definitely knew how to use these elements to its advantage. However where Rogue Nation's plot struggles is in its pacing and execution. While the pace does get steadier in the film's later acts, the beginning of the movie was hard to get into due to its abrupt pacing. When it came to the overall execution, the plot was a bit lackluster. Granted the storytelling could have been much worse, but the problem still remains that there was very little tension or gravity to the overall plot. Yes the plot was thrilling, but there was little weight to its overall presentation; which this tale easily forgettable. Yet even with a lack of execution, Rogue Nation's story managed to a fair enough job. 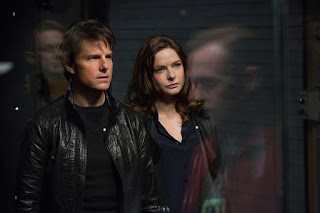 The film certainly had a solid cast to it. While I am not the biggest fan of Tom Cruise, the actor did a stellar job as Ethan Hunt. Though I have felt that this character has lacked at being intriguing, Cruise's performance as Ethan managed to make the IMF agent a charismatic protagonist. Alongside Cruise's role was great  performances from the likes of Simon Pegg and Jeremy Renner. Granted neither two had loads of development, but both actors made every moment count and it their characters worthwhile. I also found myself liking one the newest members to the MI alumni: Rebecca Ferguson as Ilsa Faust. While I felt there were areas where Faust could have been stronger in, I still found Ilsa to be a intriguing character. The villains, on the other hand, were great in theory-but they lacked in presentation. The main antagonist Solomon Lane (Sean Harris) had a lot of potential to be a great villain for series. However Lane's character had little impact on the overall film. Alec Baldwin had a good enough performance as Alan Hunley, but he had little to no character. Hunely was there to antagonize Hunt; and that was about it. It was indeed a mix bag in the area of characters, but even with the issues-this action ensemble was fitting to the Mission Impossible series. 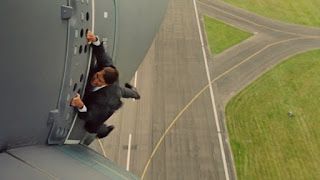 Being an action franchise, one can hope that Rogue Nation could deliver in this exciting element; and  thankfully this fifth installment was able to deliver in the area of action. The film featured a wide variety of action sequences and each of them were executed to near perfection; whether it was the practical effects of the plane scene or the tense atmosphere of the underwater sequence. Unfortunately there was not much to be had about Rogue Nation's other technical elements. Granted the film's high tech devices were cool to see, they did not have a distinct impression to the overall film. The same thing could be said about the score from Joe Kraemer. The music did work for the film, but there was nothing truly memorable about the score. Thankfully when it came to the technical aspects, Rogue Nation  did deliver where it matter.

Mission Impossible: Rogue Nation is indeed a thrilling installment to the MI series, but it is not without its issues. The movie definitely delivers in its action but it lacks in prominent areas such as story and characters. While Rogue Nation does suffer from a fatigue in the series;  it still manages to be a blockbuster that will keep action fans and moviegoers entertained.

Posted by Something Cinematic at 1:54 PM