A Dark Awakening-Analyzing Kylo and the Knights of Ren 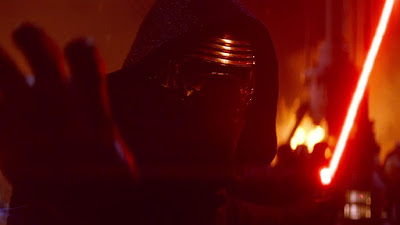 I've got a new article on Star Wars: The Force Awakens pertaining to the film's antagonist: Kylo Ren. Check out a preview to the article below:

Even though the release of Star Wars: The Force Awakens looms ever closer, there are still plenty of mysteries surrounding Episode VII; and I am sure these mysteries will not be revealed until the film hit theaters. The secrets behind The Force Awakens are numerous but the one point that definitely has every Star Wars fans' attention is the mystery surrounding the new antagonist: Kylo Ren. Kylo Ren is without a doubt the film's poster child as this villain has been, and will be, present in all advertisement for The Force Awakens. Since the character appeared in the film's first teaser wielding his crossguard lightsaber, fans and moviegoers alike have tried to deduce just who is Kylo Ren. While there is still much we do not know about this character, some details have now been brought to light. Last week in a interview with Entertainment Weekly, director J.J. Abrams shared with the magazine new information about Kylo Ren's character. For starters much of Ren's character, both behind the scenes and in the context of the film, will pay tribute to the iconic Sith Lord: Darth Vader. Though hearing that Ren is a “Vader Fan” does trouble me to a degree, this was not the bit of information that I found so interesting.

As it turns out Kylo Ren is not a name but in fact a title. Revealed by Abrams Kylo is part of a group known as “The Knights of Ren”. What the organization is and how it will effect the Star Wars universe is still unknown, but this new detail is quite the eye opener for The Force Awakens. There are a great deal of possibilities of what role these shadowy villains will play; so for now here some point that I see with the latest on Kylo and The Knights of Ren

Read the full article now on Moviepilot.
Posted by Something Cinematic at 11:41 AM