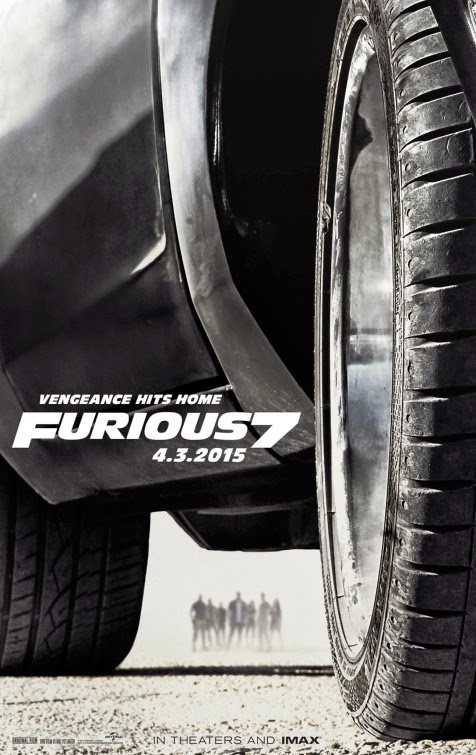 Since 2001, moviegoers have seen the world of fast cars and major heist. The Fast and the Furious has certainly gained an audience over the years with its 6 films. I will be the first to admit that I have never seen this franchise as must see movies. In fact, for the longest time, I have always seen The Fast and Furious series as just another action franchise. However, upon watch the series' later installments, I have come to like this franchise as they come off as definitive popcorn films. So here we are with the seventh installment in the series: Furious 7. Taking the director's chair from Justin Lin is none other than Conjuring director James Wan. This blockbuster was originally slated to hit theaters last summer, but the unfortunate death of Paul Walker pushed back the film's production. So after everything that has happened, is Furious 7 keep the momentum going for the action franchise, or does it hit the emergency break?

Continuing from Furious 6, Furious 7 has vengeance hitting home for Dominic Torretto (Vin Diesel) and his crew. When assassin Deckard Shaw ( Jason Stathem) seeks payback for his brother Owen (Luke Evans), Dom seeks revenge himself after Deckard destroyed the Torretto house and killed fellow crew member Han (Sung Kang). This leads Dom, Bryan (Paul Walker), Letty (Michelle Rodriguez) and the rest of the crew on global mission to get an item for Agent Frank Petty (Kurt Russell) who in return will help Dom track down Shaw and kill him.

The stories to this franchise have never been complex; though I compliment the series for its sense of continuity. However, these movies have never needed dynamic plots to be engaging. The plot to Furious 7 is no exception from this particular factor. The movie follows the action movie plot forte to a tee, and keeping true to this formula does work in the movie's favor. Because of its simple narrative, the plot was easy to follow while not feeling to much like a rehashed story. Though the pacing was a bit extensive, it still work for Furious 7's story by creating a plot that ,in my opinion, brings the series to a full circle.

It is hard to believe how established The Fast and Furious ensemble has been. Sure enough, this franchise has formulated a strong cast of characters; and much like the movie's story, Furious 7 keeps true to this strength. Vin Diesel and Paul Walker continue to be engaging leads as Dominic and Bryan. Though Dominic does not develop a great deal in this film, he continues to be a likable anti-hero while Bryan does get some development as he plays the hero on the verge of retiring. Michelle Rodriguez as Letty continues her development that started in Furious 6. While her development does not have a major impact on the overall story, it was good for the filmmakers to continue this progression for the character's sake. Both Roman (Tyrese Gibson) and Tej (Chris Bridges) were as enjoyable as always, though Tyrese's comic relief was bit excessive. Hobs (Dwayne Johnson) was barely in the film due to the plot, but far be for it for The Rock not to make every moment count.

The latest editions to the cast a bit bittersweet. Nathalie Emmanuel did not have the biggest presence as hacker Ramsey, but she still did her job. Kurt Russell played Mr.Nobody and he pulled it off in a way that only Russell could do. Then there is antagonist Deckard Shaw. Ian Shaw was possibly the best villain to come out of The Fast and Furious series and his brother is up there with him. Deckard was a different kind of villain for the series. In fact, Shaw was presented as a character that you would see in a Jason Stathem movie. That may not sound good but it in fact brought some compelling to the film, and it allowed Stathem to play to his strengths. Add appearances Djimon Housou and Ronda Rousey and you have a cast that is only fitting for The Fast and Furious franchise.

If there is one thing that makes up the Fast franchise, it would be the action.  Not only does Furious 7 have plenty of action, but this element is at its best in this sequel. The action constantly top itself featuring massive chase sequences, terrific fights and moments worthy of any blockbuster. While the action was fantastic, other areas in this factor were questionable. The series has been known of featuring these sequences/transitions with beautiful women dancing while pop music blares in the background. Furious 7 certainly had this feature in the film, but I felt there was too much of it. These moments have never been my favorite parts of any Fast and Furious movie, so the idea of these transitions being used consistently bothered me. Then again, this issue is more of a nitpick then anything else.

Furious 7 certainly lives up to the name Fast and Furious. Though it can be argued that this one is the best in the series, I can safely say that the film is among the better movies in the series as it exceeds at being a popcorn film. Among the movies many attributes, I feel that Furious 7 could be a fitting conclusion to the franchise; that is if the filmmakers/studio decided to end it here. If anything, the movie is a good send off to Paul Walker's character, which was cemented in a touching moment at the end of the film. Needless to say, Furious 7 shifts all the right gears as this film is a terrific blockbuster to see this year.

Posted by Something Cinematic at 7:40 AM