Rio 2 Review: One Frustrating Trip To The Amazon 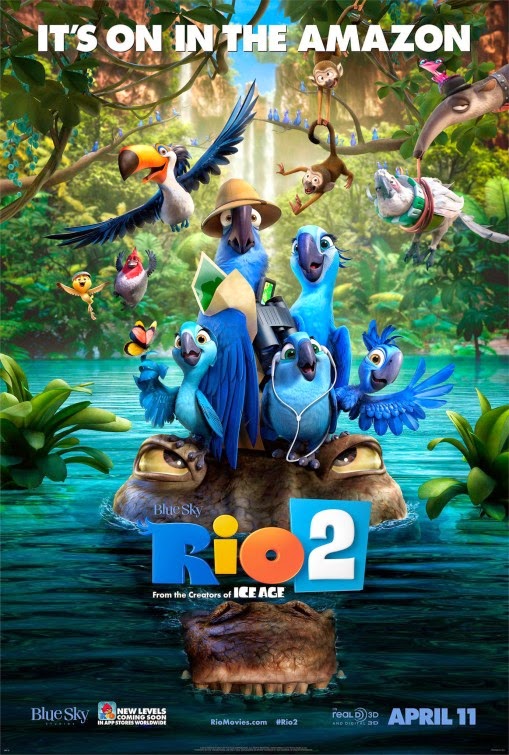 Blue Sky Studios, the animated studio the resides with 20th century Fox, is known for bringing moviegoers the Ice Age Franchise; and that is about it.  However things changed in the 2011 when the animated studio found another hit in the form of Rio. Directed by Carlos Saldanha, Rio told the story of  Blu, a awkward Spix Macaw who was thought to be the last of his kind. However that changes when Blu finds himself in a colorful adventure along side a female Spix Macaw named Jewel.  Rio made over 400,000,000 in the box office and received a good reception with critics as well as moviegoers. With this successful combination, there was only one choice for Blue Sky to make: green light the sequel.  Now in 2014 we have Rio 2. The film once again follows Blu and Jewel as they take their new family to the Amazon to find  a community of Spix Macaw. Rio 2 marks the first time that Blue Sky has had a sequel that was not Ice Age; but does this continuation live up to its predecessor? 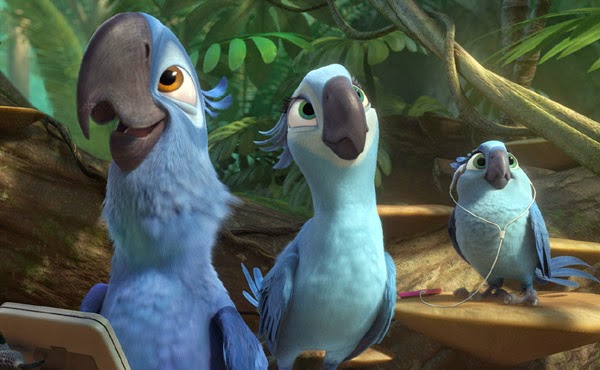 With a movie like this, you would think that Rio 2 would have a simple story that, while it would not win any awards, could still be entertaining for families. Unfortunately, Rio 2's plot is beyond frustrating by dragging its feet and having way too much to its story. I would have been fine if the movie was just about Blu's family, but I guess this movie thought it was complex enough to have three subplots. Not only do we have the story of Blu, but also in this plot is the cockatoo Nigel seeking revenge. Along with Nigel's story was  Linda and Tulio fighting evil loggers; and the "comedic trio" of Rafael, Pedro and Nico looking for a new singer in their act. This was too much for a movie like Rio 2. There was no time for any plot lines to flourish and thus I could not get invested in anything. To top everything off, the movie uses familiar traits that I have seen a hundred times before. I expected this sequel to rehash elements like Blu not fitting in the Amazon, but it was still aggravating. 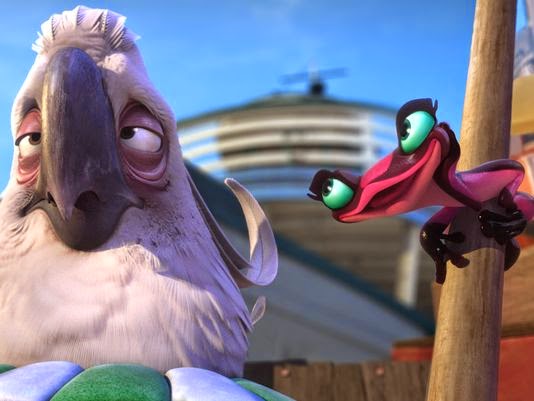 While the voice performances in  Rio 2 were solid,  I could not say the same thing for the characters themselves. Let's start with Blu(Jesse Eisenberg). Blu is once again the awkward outsider who continually screws up and has to learn a lesson. While this familiar trait was understandable, there was just one difference between Blu's direction in this film and the first movie. Blu's motivation in Rio 2 were right. While he was not comfortable being in the Amazon, he was trying to make his wife and kids happy; and yet he has to the one to learn a lesson? Blu's dilemma did not help him nor did it aid the character of Jewel. While Anne Hathaway was alright, Jewel was practically a one note character in her motivation. I liked the Blu kids enough, but they had very little screen time. The side characters from the first film were just annoying and nothing more. The only characters I ended up liking were Nigel (Jemaine Clement) and his crew. This group of character were enjoyable to watch; but among the three the one that stole the show was Kristen Chenoweth as the poisonous frog Gabi. Chenoweth was energetic in her performance, which made Gabi just  fun to watch. Aside from the poisonous frog, the new characters were pretty bland; from Bruno Mars just being there to Miguel Ferrer playing a villain so cliched, he might as well have had a sign on him saying "I'm The Bad Guy". 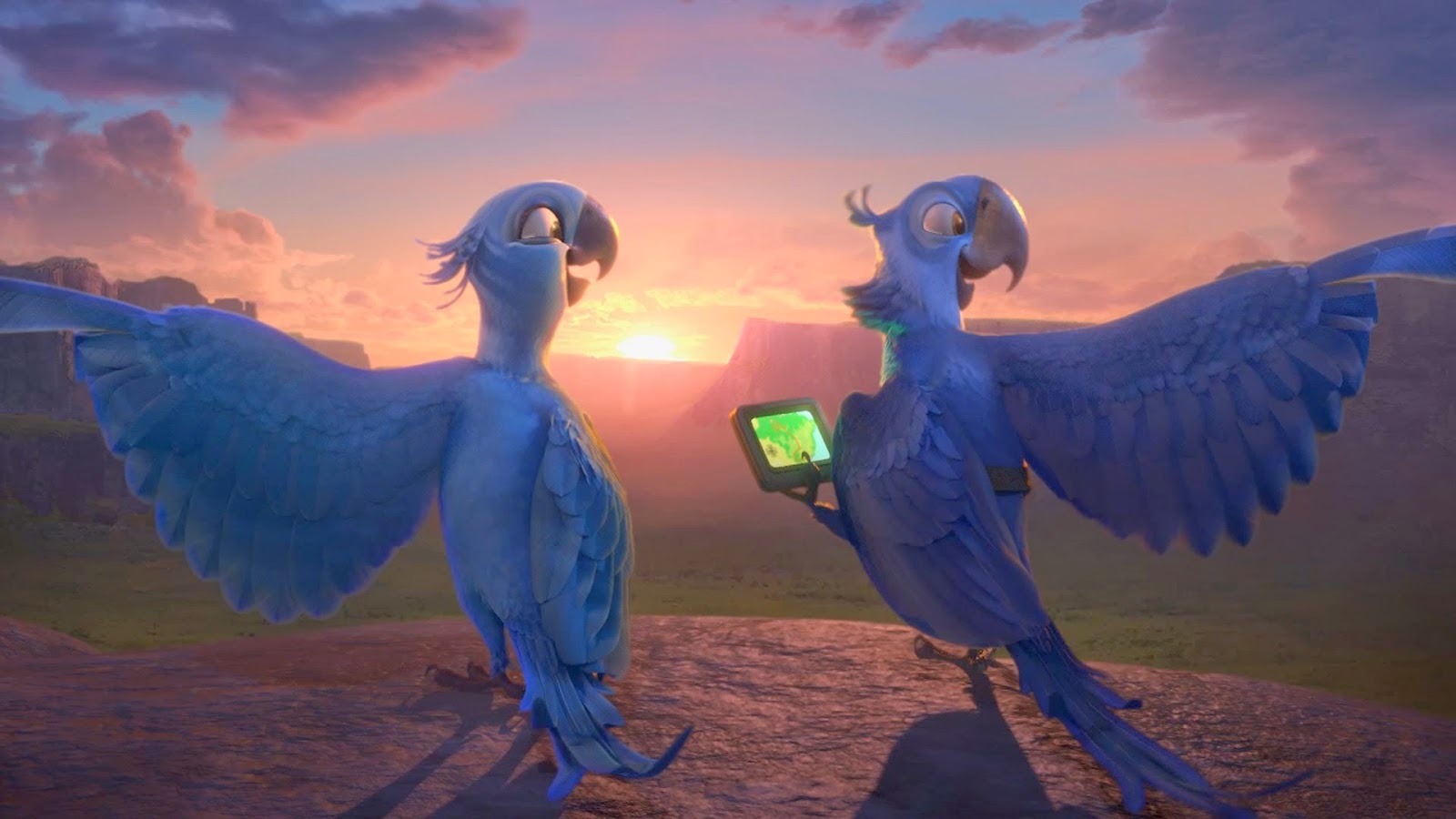 To make matter worse, Rio 2's humor is just bland. It is not the worst comedy I have seen in a animated film, but there was nothing that made me laugh nor was anything memorable. There are also several musical numbers in this sequel; which I expected to see. Unfortunately, only the two numbers featuring Nigel and Gabi stood out to me. The issue was that the songs were scattered across the film, so as a musical, it didn't feel fluent. Well if anything Rio 2 featured colorful animation; but  then again, that was expected.

Rio 2 may not be the worst animated films out there, but it is a pretty poor sequel. I might have been more lenient if this film if it was a simple family movie, but the movie was anything but. There was no sense of morals in the story, no direction for the character, and just wasn't funny. In the end, Rio 2 is just one massive "meh".  I suppose if you like the first film then check this sequel out, but then again, I can't say its worth it.

Posted by Something Cinematic at 10:38 AM