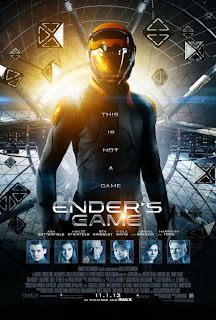 Anytime I hear that a movie based on novel hit theaters, I'm skeptic. Aside from Lord of the Rings, Harry Potter or Hunger Games, bringing "best-selling fantasy or sci-fi novels" to the movies never goes well. Yet, that doesn't stop Hollywood making these films. So hitting theaters this weekend is Ender's Game: based on the novel by Orson Scott Card. This big time sci-fi movie featured a big time cast and effects; but could these elements make this novel-based film a must see?

If you're like me, then you haven't read the Card's book.So in a case like this, you have to look at film's plot and how it works as a movie. With that said, this how the plot goes:  Ender Wiggen (Asa Butterfield) is a part of a military group that trains young minds to fight against the opposing alien force. Because of Ender's brilliance, Colonel Graff (Harrison Ford) takes a fast interest in the young cadets and see that Ender gets through the ranks so he can become the new hero of Earth. 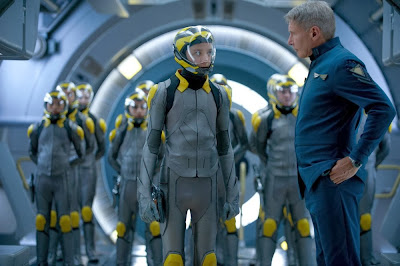 While I'm not sure how this film fairs in translating the novel, I have to say the story does work on the big screen. The only issue I had with the movie is the pacing. As soon as the film starts, Ender's is already an accomplished student. Before you know it he is assigned to fleet training, then he moves to Salamander Squad; and as you turn your head, Ender has is own team. It was hard to get a feel in Ender's progression because the plot was moving so quickly. That out of the way, the story itself was impressive. I liked the themes used in the film, such as the conflict of war and the harshness of training. It was a solid war game plot, despite that the film's story may not have followed the book word through word. 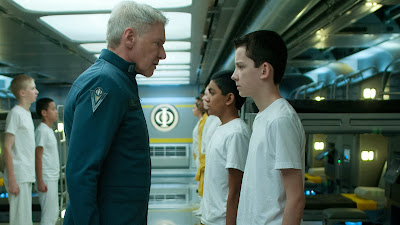 Ender's Game feature an impressive looking cast; from young actors to veterans. As casts go, I enjoyed everyone. Asa Buterfield's performance as Ender was reasonable. He could have easily been a generic protagonist, but thanks to Buterfield, Ender was a brilliant cadet full of flaws and conflict.  Opposite to Buterfield was Harrison Ford as Colonel Graff. Ford has proven his worth over the years, but every time he steps into a sci-fi film, it's a treat. The same applies for this film as Ford plays a fully dimensional characer that you can understand and, at times, get behind. While actors like Viola Davis and Ben Kingsley even out the supporting characters, the real surprise came from the cadets. Sure these rookies didn't have loads of screen time, but their performances still worked and I found them just as intriguing as the A-list celebrities.


Continuing my impressed feelings about this film, I found Ender's Game to be a technically sound film. Going in, I expected the film to have big effects, but I didn't think they would look as good as they did. Not everything was gorgeous though. There were a few CG shots that could have looked better. Yet, for the most part, the effects blended well with the overall design; making a nice looking film. Steve Jablonsky brought his style to the movie's score, but while I could here Jablonsky's familiar sounds, I thought his overall composing fit the sci-fi film. 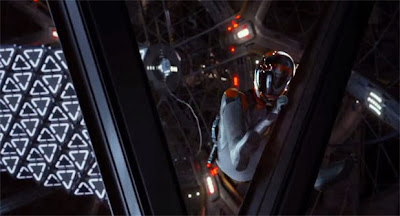 From the effects to the overall acting, Ender's Game had several great moments. If there were an scenes that stood out to me, it was the zero g training sequences. On several occasions, the cadets would compete against each other in this massive sphere with no gravity. The scenes were impressive by blending good effects with cool war game scenarios. It was like watching the Quidditch matches from the Harry Potter films; only on a bigger scale.

When I walked into the theater, I wasn't expecting much from Ender's Game. In fact, I was certain that the movie was going to be a miss. How wrong I was. Ender's Game is a great looking movie that is well acted and has strong themes in its story. I don't know how well the movie translated the book, but for what it is , Ender's Games makes for a solid sci-fi film.

Posted by Something Cinematic at 12:21 PM