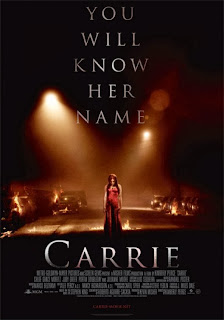 In 1974,  Stephen King released a tale of a troubled girl with the ability to move things with her mind. In 1976, that story became a horror film that went to become a classic. In 1999, a sequel was made and it was soon forgotten. Now, in 2013, a horror remake has hit theaters, and that film is simply called Carrie.

Directed by Kimberly Pierce along with producer Kevin Misher and screenwriter Roberto Aguirre-Sacasa, the team wanted to bring a refined adaption of Stephen King's novel to the silver screen. To give the movie even more credit, acclaimed actresses Chloe Grace Moretz and Julianne Moore were added to the film. With good stars and keeping true to the story, what could possibly go wrong for Carrie? Well, nothing to be honest.

If you know the story of Carrie, then you should know that the remake's plot follows the Novel, as well as the 1976 film, to the letter. When it comes to the plot point,  it seems the only differences in this remake are the locations.  That being said, I think what helps the remake's story are additional scenes. Having moments like Carrie testing her powers make all the difference. I think what makes this film's story good is its pacing and willingness to tell the story of Carrie and everyone around her.

I'm mixed about the character of Carrie. Sissy Spacek certainly made a name for herself when she played the character in 1976; and no shock in why. Spacek played a troubled girl who was just aching to fit in. However, the same applies to Chloe Grace Moretz. She played the role to the best of her abilities; making her portrayal easy to understand and fully dimensional. As you can see, it is hard for me to decide who is better; but while the two performances are at a stalemate, it is the supporting cast that makes all the difference. While I can't say I was impressed with the performances of the high-school characters,  most of them seem to have a reason for their intentions oppose to just being cliches. The only character I can take a points away from is Gabrielle Wilde's Sue. While both version of the character try to do the right the thing, it seemed that the new version of Sue was little too preachy. 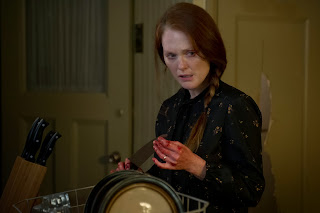 Then there is Julianne Moore as Carrie's mother, Margret. I have to say, Julianne Moore shows her talent in this role. The character of Margret White is far more frightening then her 1976 incarnation. The reason for this is subtlety. Julianne's performance was not as over the top as Piper Laiure; which made her that more frightening.

I think the big question that this film is trying to answer is whether or not Carrie can be contemporary or is it dated? While certain themes could have been stronger, I think the filmmakers did a great job bringing the story of Carrie to year o 2013. Yet, as I said, I think what would  have  sold a different approach for the film would have been theme of bullying. While it is touched upon, I'm not sure the movie hit the mark at grasping the idea bullying and how it is reflected in today's society. While it was a good attempt, the theme could have been stronger. 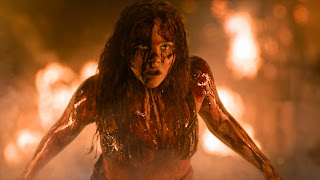 When we think of Carrie, no doubt we think of the story's major scene where Carrie gets soaked in pig's blood and all hell breaks loose.  When I saw the remake today, I thought this was the weaker scene oppose to the 1976 film. However, after seeing the original again, I have had a second opinion. While the scene might not as much practical effects, it was excited to see. There was nothing in the sequence that was distracting and it made easier to enjoy the rage of Carrie.

I know many will not agree, but I have to say: The Carrie Remake is the best film to have the name Carrie to it. Sure there are issues, but the movies strengths comes in its execution. This remakes resurrect Stephen King's story for a new generation; and Carrie has never looked better. Posted by Something Cinematic at 7:15 PM