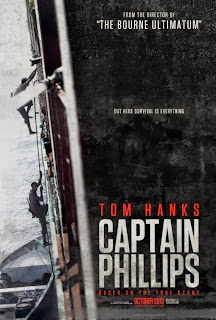 Film inspired by true events are a dime and a dozen; but every now and again, we have a movie that does a swell job at bringing the true story to the silver screen. The latest film to bring reality to the limelight is Captain Phillips: the story of the hostage situation of the Maersk Alabama in 2009. This adaption was courtesy of  the book A Captain's Duty: Somali Pirates, Navy SEALs, and Dangerous Days at Sea , which was written by Capt. Richard Phillips and Stephan Talty. With a star like Tom Hanks and director Paul Greengrass, Captain Phillips has been shaping itself into quite the movie; and now it has the reviews to back it up. Yet, is this thriller worthy of the true events and your time?

As already stated, the movie follows the events of the hostage situation of the Maersk Alabama. The situation saw Captain Phillips and his crew dealing with Somalian Pirates only for the captain to be capture and the US Navy to get involved. Now imagine the tension and drama that made this situation and turn it into an action flick. 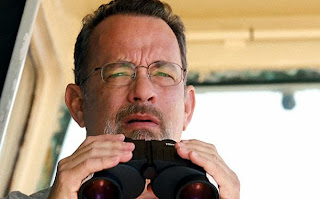 Captain Phillips' story is one that is easy to get into. While I felt the first act was quickly paced, once the Maersk Alabama gets chased by the Pirates, the plot straighten itself out. The story plays out by looking at two perspective: Captain Phillip and Muse. While this element does not last long, it gave the film a form of depth and I think it helped in the long run. Nevertheless, Captain Phillips has a story tension that will have anyone interested.

I can't say Tom Hanks gives the performance of his life as Captain Phillips; but it certainly one his best in a while. If anything the role is one of Tom Hanks' more physical ones. I was curious to see how Barkhad Abdi would fair as Muse. While his performance wasn't as impressive as I was hoping, it was still solid. The rest of the cast is their to be supporting, and nothing more. That might sound discrediting; but on the contrary, the cast still worked. 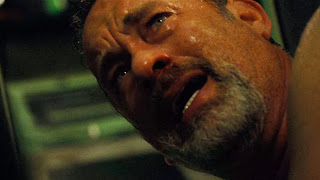 The cinematography was a hit a miss for me. On one hand, I like the overall imagery. Unfortunately, I found that  the cinematography to be very distracting. The camera move so much that it became an eyesore for me. Granted, I understand why the camera was moving, but it was still obnoxious. Fortunately, what wasn't straining was the tension, and boy is this movie was exciting. From the chase of the Marersk Alabama to the film's climax, Captain Phillips is certain to have you on the edge of your seat.

The one scene that stood  out to me was the chase of the Maresk Alabama. In fact the whole sequence of the Alabama vs Pirates was great. The scene was riddled with tension and didn't play like your average action film. I would also give props to the film's climax, but you know what is going to happening in that, so it wasn't as gripping. Still, the sequence is tense.

Captain Phillips is a film worthy of its subject matter. While the cinematography can be difficult to deal with, the film is still gripping and has terrific performance from Tom Hanks. I can't say how close it is to the true story; but Captain Phillips makes for one exiting time at the movies.

Posted by Something Cinematic at 8:48 PM