Raya and the Last Dragon Review 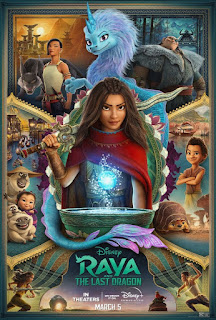 In the realm of Disney, the studio have created a variety of magical worlds. From enchanted kingdoms to whole new worlds, the house of mouse have enticed moviegoers with a number of magical realms and it is a concept that the studio utilizes even to this day. This is certainly the case with the studio’s latest film: Raya and the Last Dragon. Directed by Don Hall and Carlos Lopez Estrada, Raya and the Last Dragon started off as the project Dragon Empire (which was being handled by a different team) until it eventually changed into the feature presentation in question. The film was originally slated to hit theaters last November, but (as the story goes) the movie was pushed back due to the pandemic. Now after cementing its new release date, as well as premiering on Disney+, the movie has made it to theaters; and like many films before it, Raya and the Last Dragon turned out to be a standout movie for Walt Disney Pictures.
To see the full review, click here and head over to Something Cinematic for more cinematic content.
Posted by Something Cinematic at 6:43 PM

Email ThisBlogThis!Share to TwitterShare to FacebookShare to Pinterest
Labels: raya and the last dragon, review