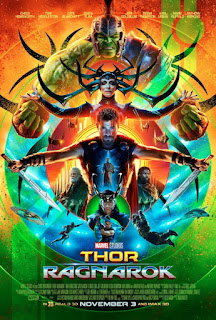 The Holiday Season is about to get underway which means that it is time for a big time blockbuster; or to be precise it is time for another film from Marvel Studios. The Marvel Cinematic Universe has already had it's share of films this year with the likes of the Guardians of the Galaxy Vol.2 and Spider-Man: Homecoming. Now the studio brings its year to an end with none other than Thor: Ragnarok-.the next solo adventure for the God of Thunder. Directed by Taika Waititi Ragnarok puts the Mighty Avenger in a cosmic journey that also serves the MCU's version of the Norse End of Days. With a distinct design and the appearance of a certain Avenger, Ragnarok looked to be an exciting blockbuster that could certainly be another hit for Marvel Studios. However what I experienced was quite possibly the weakest Marvel film to date.

Ragnarok features Thor (Chris Hemsworth) trying to stop the goddess of death Hela (Cate Blanchett) from destroying Asgard. Yet this proves to be a task for Thor after he loses his hammer and is trapped on the planet Sakaar where he is forced to compete in the Grandmaster's (Jeff Goldblum) Contest of Champions; which also features the Hulk (Mark Ruffalo) as a contender. The plot of Ragnarok, in of itself, was not bad. The tale to this superhero film had interesting ideas and plenty of moments that ranged from being enjoyable as well as captivating. However how this story was handled is what made the difference for me, and in this case the latest chapter in Thor's journey left much to be desired. While the story had good ideas it did little to implement them. The plot was suppose to be the MCU's take on Ragnarok and yet the Asgard element loses its impact because the story focused on being a space adventure Now this would not have been a problem if the adventure was compelling, but sadly it was not. The reason for this leads to the other problem in the story: the plot's pacing.  As soon as Thor lands on Sakaar the story starts to move at a snail’s pace which it made it increasingly difficult to sit through the movie. When it came right down to it this was a story that relied to much on convenience and padding which suggest that this movie had more important things to worry about then telling a good story.

The movie had a formidable cast but the ensemble to Thor: Ragnarok was a hit and miss situation. In the matter of performances the cast did the best they could with the material presented to them. However when it came to things such as character development and progression, this film had little to none. Thor's development made some sense but his direction was squandered for the need to make him a goof. Loki (Tom Hiddleston) did not fair any better as the once great villain was turned into an antagonist with almost no development. Other returning characters such as Heimdall (Idris Elba) and Odin (Anthony Hopkins) has such a minimal presence in the movie that it seemed like they did not need to be there at all. I wish I could say that the new characters made up for the film's shortcomings, but unfortunately they too were underwhelming. Valkyrie (Tessa Thompson) had the most development of anyone but her progression did not make for an intriguing character as she was too predictable . Meanwhile Karl Urban as the Executioner was there to be fodder and nothing more. The only one who worked was the Grandmaster as his bizarre antics made sense for character and Goldblum's style of acting  When it came to the film's villain, Hela had the potential to be a captivating antagonist. Unfortunately Hela's motivations was very mundane and the character would have been a total waste if not for Cate Blanchett's performance. Last and not least was the inclusion of the Hulk. Featuring the Hulk was not necessarily a bad thing, but having the Avenger in Ragnarok did not do him any services. Yes the movie gives the Hulk some new traits (like speaking) but his direction was narrow to point where including the hero seemed unnecessary. 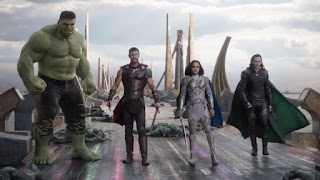 If there was one area Thor: Ragnarok strived in it was the technical elements. The movie's visuals, though some effects were better than others, were impressive while the film's cinematography and design gave it a distinct look. The score by Mark Mothersbaugh was surprisingly well done as it created an out of this world composition for the movie. The film's action was decent.  Although I felt that this area could have been more memorable the action worked within confines of the movie's concept. Yet of all this leads me to the elephant in the room: the comedy. This movie had a sense of humor and it would remind you of this whether you like it or not. The comedy was so blatant that the movie may as well have featured a laugh track. Having comedy in film such as Thor: Ragnarok is not a bad thing. Comedy can make a movie  more engaging and it helps the drama to be taken seriously as the humor allows moviegoers to connect with the story and characters. However in the case of this film the humor was beyond excessive. The comedy dictated everything which took away from the film’s stronger moments. It was to the point where, regardless of what was happening, I could care less about the circumstances of Thor: Ragnarok. Plus the comedy was not that funny. 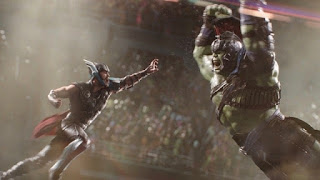 Thor: Ragnarok had so much potential. The likes of visuals made this film stand out and the performances from the cast gave the movie the right level of prestige. Yet the latest Marvel film squanders its substance for shock value and punch lines. The film's obsession to be "the funniest movie of the year" did it no favors as its sporadic presentation damaged the likes of storytelling and character development. I will not say that Thor: Ragnarok is the worst film I have seen all year, but so too will I not blindly praise this cosmic adventure for the blatant mediocrity presented on the silver screen.

Posted by Something Cinematic at 6:35 PM